Tua Tagovailoa: Dolphins QB taken to hospital with head, neck injuries as Miami suffer their first loss of the season to the Cincinnati Bengals

Tua Tagovailoa was sacked by Cincinnati Bengals defensive end Josh Tupou late in the first half; he remained motionless on the ground for seven minutes; the Miami Dolphins quarterback was taken to University of Cincinnati Medical Center for further evaluation 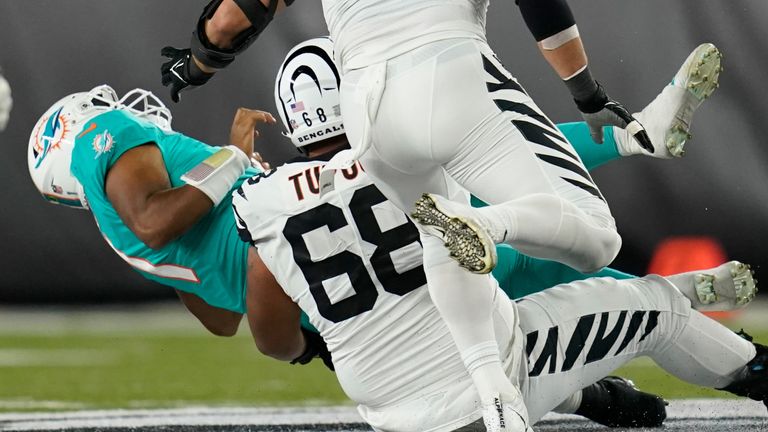 Miami Dolphins quarterback Tua Tagovailoa sustained neck and head injuries and was stretchered off the field during their 27-15 loss to the Cincinnati Bengals on Thursday night.

Tagovailoa was sacked by Bengals defensive end Josh Tupou with about six minutes left in the first half. He remained motionless on the ground for seven minutes in hugely concerning scenes before being carted off the field.

The Dolphins have said the third-year QB was conscious, had movement in all his extremities and was taken to University of Cincinnati Medical Center for further evaluation, adding that he would be released from the hospital and fly home with the team that night.

The 24-year-old Tagovailoa had been suffering from a sore back and an ankle injury this week, seeing him listed as 'questionable' ahead of the game, prompting questions over whether he should have started against the Bengals.

Tagovailoa had briefly left the field during Miami's 21-19 victory over the Buffalo Bills on Sunday, following a hit by linebacker Matt Milano, with what was initially described by the Dolphins as a head injury.

The team said after the game that Tagovailoa had suffered a lower back injury in the first half, which was exacerbated by the hit from Milano. The NFL confirmed on Wednesday that they are conducting a joint review with the NFL Players Association into whether the league's concussion protocol was followed.

After Tagovailoa's injury against the Bengals on Thursday night, the NFLPA tweeted: "Player health and safety is at the core of the union's mission. Our concern tonight is for Tua and we hope for a full and speedy recovery. Our investigation into the potential protocol violation is ongoing."

Miami head coach Mike McDaniel said Tagovailoa called for him when he went down. "I could tell it wasn't the same guy that I was used to seeing," he said. "It was a scary moment. He was evaluated for a concussion. He's in the concussion protocol, but he's being discharged.

"It's an emotional moment. It's not a part of the deal you sign up for. His team-mates and myself were very concerned, but he got checked out and its nothing more serious than a concussion."

With regards to concerns over Tagovailoa's health coming into the game, McDaniel added: "I don't think an injury from last week made him fall the same way this week.

"I do not have any - absolutely zero - patience for, or will ever put a player in a position for them to be in harm's way."

Bengals quarterback Joe Burrow, who was taken with the No 1 overall pick when entering the league in the same 2020 Draft as Tagovailoa, hopes to see him make a quick return.

"Hopefully, he has a speedy recovery. I'm going to text him after a bit and see how he's doing." 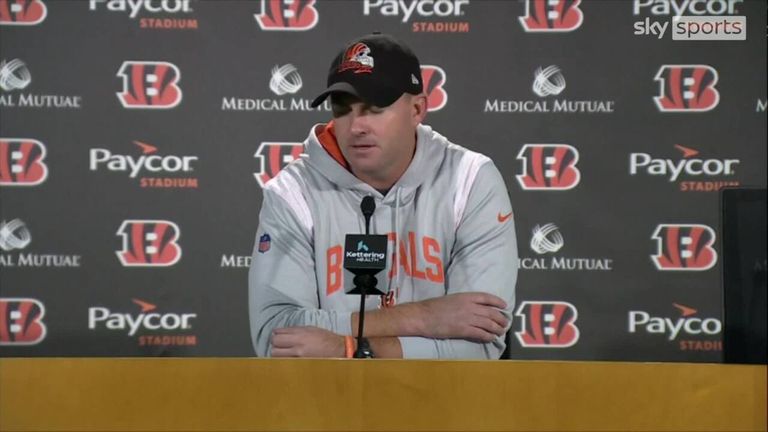 Former Dolphins quarterback and team-mate of Tagovailoa, Ryan Fitzpatrick, who was part of the broadcast team for the game on Thursday night, said: "I've played a lot of football and that was one of the toughest scenes I've ever seen.

"For him as a brother, getting to spend a few hours with him last night, it was the happiest I've ever seen him. To then see him do that, you could just feel it, with the fans and both teams. It was a scary scene... I'm having a tough time right now."

Burrow passed for 287 yards and two touchdowns and Evan McPherson kicked two fourth-quarter field goals to help the Bengals record a 27-15 victory over the Dolphins on Thursday night. Receiver Tee Higgins was the standout on the night, catching seven passes for 124 yards and one touchdown for the Bengals (2-2), Vonn Bell intercepted two passes, Joe Mixon rushed for a score and tight end Hayden Hurst caught a TD pass.

Backup QB Teddy Bridgewater replaced Tagovailoa and completed 14 of 23 passes for 193 yards, one touchdown and one interception for the Dolphins (3-1), who suffered their first defeat of the season.

Tagovailoa had completed 8 of 14 pass attempts for 110 yards and one interception before exiting the game late in the first half.

Tyreek Hill caught 10 passes for 160 yards for Miami, continuing his fine start with his new team following his offseason trade from the Kansas City Chiefs.

In a tight game, Cincinnati took a 17-15 lead on a 19-yard McPherson field goal with 12 minutes left to play, before he kicked another one three times as long from 57 yards to give the home side a 20-15 advantage six minutes later.

Bell collected his second interception of the game with three minutes left and returned it 46 yards to the Dolphins' 45-yard line and five plays later, Burrow threw a two-yard touchdown to Hurst to practically clinch the game.