Josh Allen passed for 238 yards and two touchdowns on Sunday night as the Buffalo Bills beat the Pittsburgh Steelers 26-15 to inflict a second-straight defeat for the visitors.

The Bills (10-3) went behind 7-0 early on to the Steelers (11-2), but then reeled off 23 unanswered points. Allen was 24 of 43 passing, with scoring strikes to Stefon Diggs - 10 catches, 130 yards - and Gabriel Davis. Taron Johnson also had a crucial 51-yard interception return for a touchdown just before half-time, a touchdown that seemingly resulted in a rather drastic change to both teams' style of play in the second half.

Pittsburgh quarterback Ben Roethlisberger was 21 of 37 for just 187 yards, throwing two interceptions as well as two TDs - to James Washington and JuJu Smith-Schuster.

The Steelers had only 224 yards of total offence, converting just 1 of 10 third downs they had in the game. Buffalo, by contrast, tallied 334 yards and were 7 of 14 on third-down opportunities.

Generally, the first half was mostly a punt fest, with the first quarter finishing scoreless, as both defences dominated.

The first series that ended on something other than a punt came when the Steelers' Cam Heyward grazed Allen's arm at his release point, resulting in Mike Hilton's interception.

That didn't lead to any points, but there were a couple more turnovers in the second quarter that most likely did.

When the Bills' Dawson Knox bobbled the ball trying to catch a pass, Cam Sutton grabbed it for an interception at the Buffalo 30-yard line. That led to Roethlisberger's 19-yard scoring pass to Washington.

Tyler Bass' 34-yard field goal pulled Buffalo back within four at 7-3. Then, in a key play for Buffalo, Taron Johnson stepped in front of Smith-Schuster for an interception and a 51-yard touchdown return. Bass missed the extra point, giving the Bills a 9-7 lead 52 seconds before half-time. 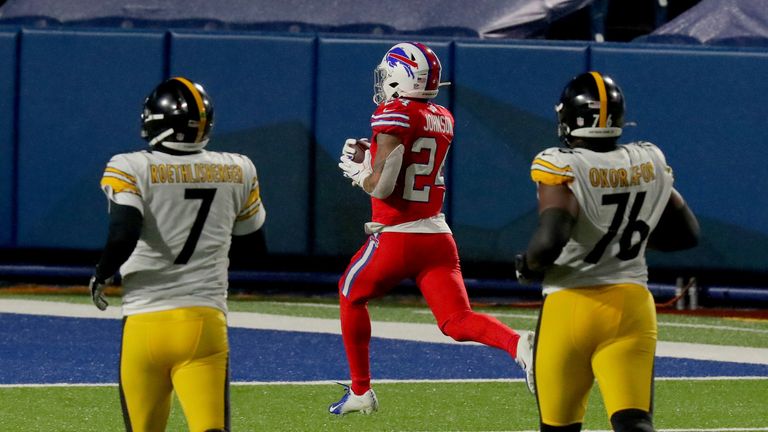 Buffalo opened up after the break with an eight-play, 68-yard drive ending with an 19-yard touchdown pass from Allen to Diggs for a 16-7 lead. Later in the third quarter, Allen found Davis on the far left side of the endzone from 13 yards to push the score to to 23-7.

In the fourth quarter, the Steelers themselves drove 81 yards in 10 plays and pulled to within one TD at 23-15 following on from Smith-Schuster's three-yard score and Roethlisberger's successful two-point conversion pass to Eric Ebron.

But a further Bass field goal, this one from 23 yards, made it more comfortable for the Bills than many would have expected and they were able to safely see off the subsequent series from Pittsburgh - Levi Wallace picking off 'Big Ben' - and Buffalo gladly ran out the clock.