Derek Carr threw for 435 yards, two touchdowns and one interception, while Darren Waller had 10 catches for 105 yards as the Las Vegas Raiders edge out the Baltimore Ravens in overtime; Lamar Jackson finished with 235 passing yards for a touchdown along with 86 rushing yards Derek Carr threw a 31-yard touchdown pass to Zay Jones in overtime as the Las Vegas Raiders beat the Baltimore Ravens 33-27 in a Monday Night Football thriller at Allegiant Stadium.

It proved a fitting welcome for the Vegas fans that had been forced to watch from home during the team's first season in the entertainment capital of the world due to the coronavirus pandemic.

Having fallen behind 14-0 early on, the Raiders rallied to send the game to overtime on a Daniel Carlson field goal with two seconds remaining in the fourth quarter.

The hosts marched down to the one-yard line on the opening possession of the extra period, only for Carr to be intercepted as the Ravens took over in search of a winning score. 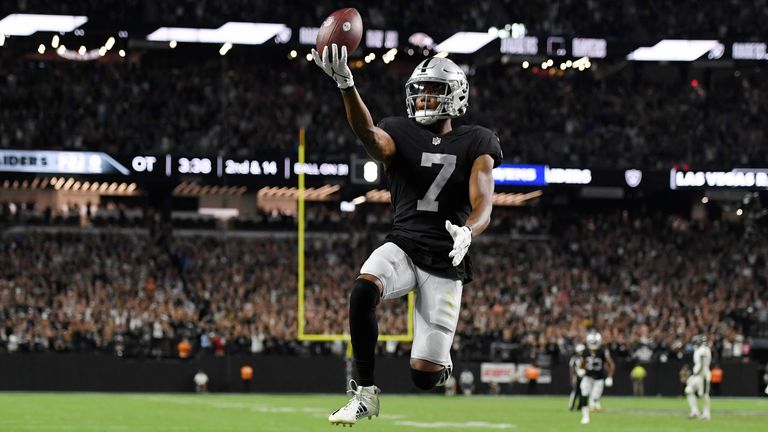 Carl Nassib subsequently forced a fumble by Ravens quarterback Lamar Jackson, setting up Carr's walk-off touchdown pass to Jones after the Raiders had almost squandered their chances again with a delay of game penalty.

Las Vegas thought they had won it earlier in overtime when Carr connected with Bryan Edwards with a 33-yard pass that was ruled a touchdown before later being reversed.

Carr finished the night 34 of 56 passing for 435 yards, two touchdowns and one interception, while Jackson went 19 of 30 for 235 yards and one score for the Ravens as well as rushing for a team-high 86 yards in the wake of season-ending injuries to running backs J.K. Dobbins and Gus Edwards. 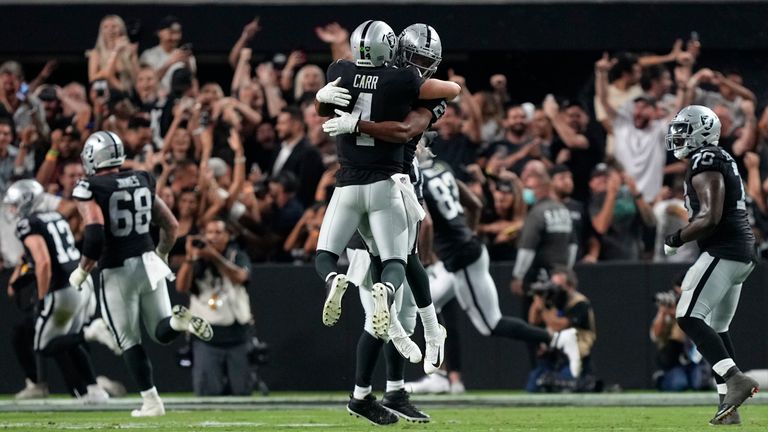 Speaking in his post-game press conference, Raiders head coach Jon Gruden hailed tight end Darren Waller as the best player he has ever coached. And he treats him like it on the field, with Carr targeting him 19 times - the most by a player in Week One.

His faith continues to be rewarded by production from one of the most dominant players in his position in the league, the one-time Raven finishing with 10 catches for 105 yards and a touchdown.

Credit must also go to Carr, who completed 16 of 24 for 267 yards, two touchdowns and one interception across the fourth quarter and overtime alone as he recomposed himself to shrug off the interception and ice the game.

On the other side of the ball, Maxx Crosby was a constant menace off the edge as he recorded nine quarterback pressures, eight quarterback hits and two sacks for a Ravens defense that ranked 25th overall last year.

Lamar Jackson meanwhile resumed normal service, once again proving a thorn with his unrivalled ability to manoeuvre out of the pocket. The touchdown play involving Marquise Brown was magical, but he will be disappointed with his two fumbles on the night. Ty'Son Williams offered an early remedy to the Ravens' injury crisis in the backfield when he reeled off a 35-yard rushing touchdown to give his side the first points of the game late in the first quarter.

Jackson then produced a moment of brilliance to evade pressure from Crosby and Yannick Ngakoue by scrambling to his right before firing a laser to 'Hollywood' Brown at the back of the end zone for a 10-yard touchdown that would help give the visitors a 14-0 lead.

The Raiders drew level for the first time since the start of the game with nine minutes to play in the fourth quarter when Josh Jacobs run in for a 15-yard score after Quinton Jefferson's forced fumble, to which Baltimore replied through Latavius Murray's eight-yard rushing touchdown that had been set up by Jackson's 49-yard pass to Sammy Watkins. 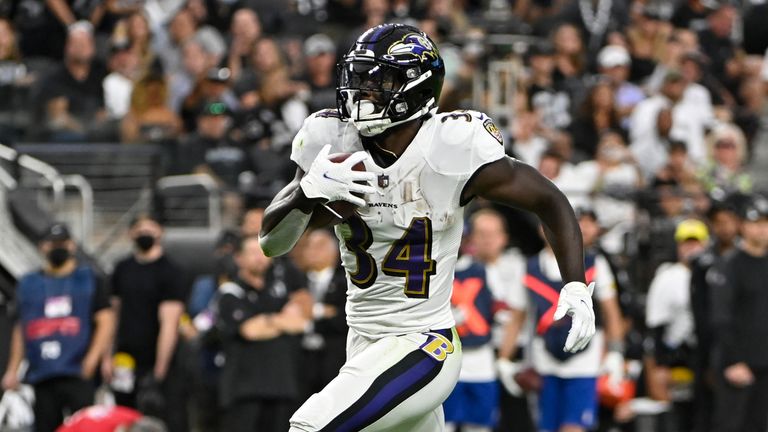 Back came the Raiders, this time Henry Ruggs III hauling in a 37-yard reception to set up Waller's 10-yard touchdown catch to make it 24-24 with 3:44 on the clock.

A frantic finish to the fourth quarter saw Jackson's 28-yard run put the Ravens in position for a go-ahead 47-yard field goal from Justin Tucker with 37 seconds remaining, before Carlson's 55-yard kick with two seconds to play sent the game to overtime.

The Raiders thought their hopes had been dashed when Carr's intended pass to Willie Snead was deflected and picked off by Anthony Averett, but Darius Philon was at hand to retrieve Nassib's forced fumble at the Ravens 27 on the ensuing drive to pave the way for Carr's game-winning strike to Jones.