The Tennessee Titans' defense appears to have turned a corner after statement performances against the Buffalo Bills, Kansas City Chiefs and Los Angeles Rams; watch the Titans seek a fifth straight win when they face the New Orleans Saints live on Sky Sports NFL from 6pm on Sunday

Here comes the Tennessee Titans' defense, at long last. From every angle, at full throttle, in packs and primed to pin down, chew up and spit out their oft-maligned reputation.

The NFL's recent giant slayers added an MVP candidate in Matthew Stafford and Super Bowl contender in the Los Angeles Rams to their list of scalps in Week Nine following successive victories over the Buffalo Bills, Kansas City Chiefs and Indianapolis Colts, having also knocked off the Seattle Seahawks in Week Two.

As it goes, the last three teams to reel off a four-game win streak against sides from the previous season's playoffs all went on to reach the Super Bowl that year, those being the 2011 New England Patriots, 2010 Green Bay Packers and 2009 New Orleans Saints.

Build-up to Sunday's match-up had contemplated the indefinite loss of Derrick Henry as the apocalypse of Tennessee's playoff hopes, while the Rams were showered with more fame as the league's trendy anti-Draft juggernaut on the back of trading for Super Bowl MVP-winning pass rusher Von Miller.

Besides a 28-16 statement win, the outcome was five sacks for the Titans, their most since producing five against the Atlanta Falcons in September 2019, along with 11 quarterback hits and two interceptions, including Kevin Byard's first career pick six. Their 69 rushing yards on offense were, meanwhile, the fewest in a victory since Week Three of the 2012 season - against Stafford's Detroit Lions.

'Well, well, well, how the turntables...' (one for The Office and Michael Scott fans).

The Henry withdrawal symptoms will not disappear, such has been the extent of his heroics, but they can be softened by a swing-and-miss defense missing far less frequently of late. A defense Mike Vrabel has deserved.

Terms like 'gritty' and 'tough' and 'physical' and 'bruising' were tossed into the Titans lexicon by convenience at times - largely thanks to the brute making men look like toddlers out of the backfield - without any sustained justification on defense. While being a unit that has always played hard under Vrabel, the inconsistency in production has often muddied its threat in comparison to others in the league's Championship-chasing upper echelon. Perhaps no longer.

First-year defensive coordinator Shane Bowen, promoted from outside linebackers coach during the offseason, is pulling the strings to a refreshingly different proposition.

The Titans are currently ranked fifth in the NFL with 23 sacks so far on the year; outside linebacker Harold Landry III (nine), interior lineman Jeffery Simmons (5.5) and defensive end Denico Autry (five) have 19.5 between them alone - more than the 19 Tennessee recorded across the entire 2020 campaign, which marked the third fewest in the league and tied-fewest by a playoff team in NFL history.

"We knew a lot of people were doubting us," said defensive lineman Simmons. "We knew that everyone was having thoughts with Derrick (Henry) missing. We miss Derrick. It sucks that he got hurt.

"But one thing about is, and I was saying on the sideline, 'Defense wins championships.' It's going to happen, our offense may stall in a drive or whatever it may be. But as long as the defense go out and put the fire out, that's what we're about."

What's more, they are first in sacks (19) and second in pressure percentage (30) when not blitzing, according to ESPN Stats & Info. In fact, Next Gen Stats had them blitzing Stafford on just four of 53 dropbacks - up the four-man rush!

Bowen has weaponised his unit to be funky and smart, slippery and explosive, bringing heat up front with a cocktail of stunts and simulated pressure while throwing in post-snap movement with safety rotations and inverted coverages before topping it all off with some good old-fashioned play-closing effort and communication.

They gave the Rams fits; few give the Rams fits. Sunday's opening was a FITting reflection of what the Titans are offering up front as they delivered sacks on back-to-back plays.

The first saw Autry become beneficiary of a stunt orchestrated by Teair Tart and Simmons on the inside: Tart, playing 2-technique, crosses the face of the right guard and attacks the center upon the snap at the same time Simmons, in 3-technique over the left guard's shoulder, switches with him to drag out the now-vacated right guard. At that point Autry is pushed into the open A gap by the right tackle before hauling down Stafford, who had been forced to delay his release momentarily by not only fine coverage downfield but Tart's decision to drop a step and raise his hands to impair the quarterback's vision. High motor, calculated, collective effort pass rushing.

The second underlined the power of Tennessee's four-man rush as it bludgeoned what began as a seven-man protection including the chip-blocking tight end that would eventually break off underneath.

This time the Titans played a widespread 5-tech, 3-tech, 3-tech, 9-tech, Autry using speed to cross-chop inside the right guard and keeping his balance beyond a trip from the center - preoccupied with Bud Dupree looping in from his left - to reach Stafford, who wriggles up through the pocket to survive, at least for the moment. In the meantime, Simmons comes out of his bull-rush on the left tackle before having the flexibility to bend around the center and wrap Stafford for the sack. One dominant closer is good, but a gelling, unrelenting quartet also works. 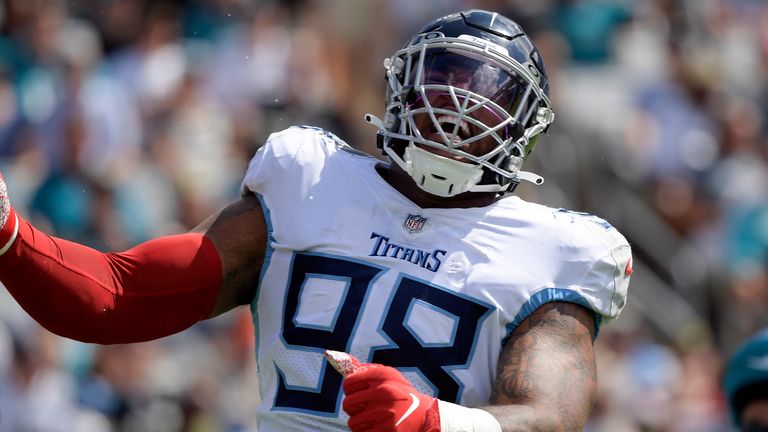 Stafford later threw an ugly interception while being tossed into his own end zone on third-and-four in the second quarter, similar to that of Carson Wentz in the fourth quarter the previous week.

Bowen simulates pressure from David Long, who is shaded over the shoulder of the right guard before retreating into coverage, which lures a now-assignment-less Austin Corbett to look right and check on the right tackle's battle with Landry. It creates a brief but big enough window for Simmons to escape on the flush stunt and smother Stafford, who gets the ball out in a bid to prevent the safety only to see Long positioned for an easy pick having also been well placed to cut off the lane to Cooper Kupp on the shallow crosser.

All five sacks on the day came via four-man rushes, it would have been six were it not for Long's interception.

Where it might have faltered in the past, the Titans' defense rewarded Henry and co against the Bills in Week Six, stuffing Allen on fourth-down in the final seconds to seal a 34-31 win during which they had three sacks, eight quarterback hits and an interception.

Landry's sack on Allen on third-and-10 in the first quarter had been testament to Tennessee's success on defense as a collective: Byard is firstly wise to the route combination and ignores the dig route in favour of cutting off the crosser underneath in an inverted Cover 3, by which point Landry has already collapsed the pocket on an interior stunt to beat a converging Autry to the sack.

Speed and power and intensity up front complemented by the IQ of Byard, who admitted this week he was not even supposed to be in the position that resulted in his pick six against the Rams having read Stafford's intentions and left his hook/curl zone to jump on the flat route. Instincts, conviction and growing confidence serving a defender well. 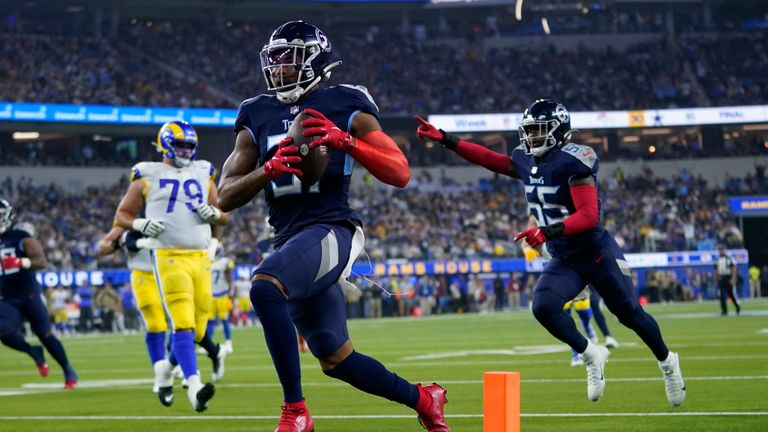 Byard himself is having some year with five interceptions and 11 pass defenses through nine games, including four picks in his last five outings. His interception against the Bills was one of his more routine and primarily thanks to the sheer speed from Autry to breeze by the right tackle and tip Allen's pass in his direction. Nonetheless, it still needed him to react, and react he did.

"He's somebody that is extremely intelligent," said Saints head coach Sean Payton. "That serves him well when you watch it (tape). He has great ball skills. He has climbed on routes, stayed on top of routes, you name it. He's one of those guys that understands passing game principles.

"He understands what the offense is trying to do and I think generally speaking, good safeties, the ball kind of finds them. He's one of those guys."

The Titans are ranked 19th in total defense after finishing 28th in 2020, and 14th in scoring in contrast to 24th last year; they are trending the right way. 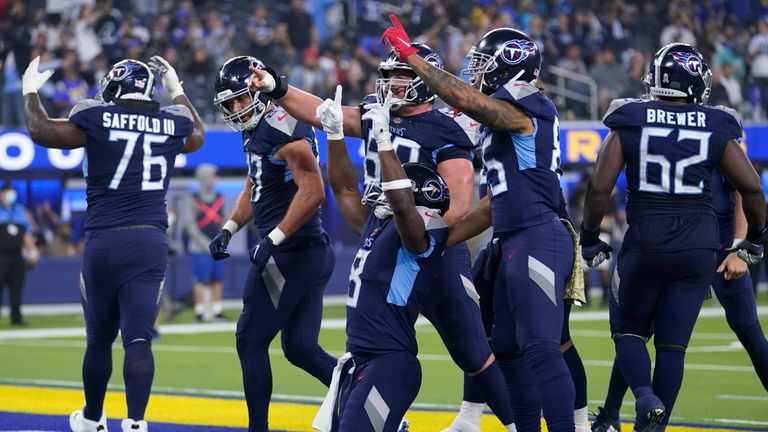 Landry is ranked third in the league with 47 pressures, followed closely by Simmons and Autry with a tied-fifth-most 42 apiece. Simmons and Autry, meanwhile, lead the NFL with 27 and 20 pressures since Week Six, respectively - the Colts allowing Autry to depart in free agency might go down as a rare miss on general manager Chris Ballard's glowing offseason record.

It should be said Tennessee are also still waiting to see the best of Dupree after the former Pittsburgh Steelers edge rusher arrived alongside Autry on a five-year, $82.5m deal as part of the organisation's defensive spending spree.

Kansas City's dip in form aside, keeping Patrick Mahomes and the Chiefs out of the end zone is no fluke. And if their goalline stand against the Bills did not put teams on alert, frustrating the Rams as they did certainly will have.

Now, suddenly, the more pressing questions seem to orientate towards how Ryan Tannehill, the newly-arrived Adrian Peterson and the Titans offense respond without Henry.