Mike Vrabel and Joe Burrow have become two of the NFL's most admired figures as varying beacons of 'toughness' at the forefront of their respective teams; watch the Cincinnati Bengals @ Tennessee Titans live on Sky Sports NFL from 6pm on Sunday

Mike Vrabel and Joe Burrow share a defining trait. One of refusal to comply with hardship as two of the NFL's unwavering competitors with a zest for defiance, a knack for winning and a nonchalance while doing so.

They meet on Sunday, Vrabel burying marquee losses and so-so roster depth with the buoyancy of another playoff-bound campaign, Burrow shrugging off a rich history of physical punishment and injury to his chief assassin to keep Cincinnati's season alive after a stuttering start.

Vrabel repels regression, Burrow deters deterrence and vice versa, both having been instrumental in installing and since embodying the identity of their respective, different organisations.

They represent varying faces of toughness: tough to beat, tough to rattle, tough to keep down. Neither are adverse to animation, but while the wrath of Vrabel is not to be trifled with and the swagger of Burrow not to be denied, their ability to galvanise is built predominantly on wily football intelligence and situational poise as opposed to rah-rah rallying cries.

Vrabel's Titans sit 7-3 as the third seed in the AFC having won seven of their last eight despite trading away lead receiver AJ Brown in the offseason and losing starting left tackle Taylor Lewan and 2021 sack leader Harold Landry to season-ending knee injuries at the beginning of the campaign.

Burrow's Bengals are 6-4 and in the hunt for a second straight playoff campaign with six wins in their last eight despite being without the Jerry Rice to their Joe Montana in Ja'Marr Chase for three-and-a-bit games and ongoing pass protection frailties that have allowed the fourth-most sacks in the league through 11 weeks. 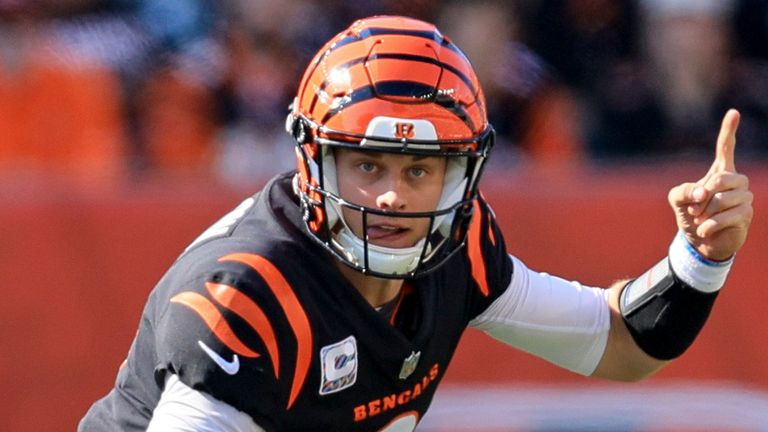 Both subscribe to the proverbial 'find a way' club. Vrabel may not officially feature on Bill Belichick's coaching tree, but with his seasoned defensive nous and talent for maximising personnel he might be the most accurate modern beacon for Belichickism among the Foxboro luminary's former players/staff that have taken on head coaching gigs. Burrow dices defenses with Montana precision and demands admiration with Joe Namath charm as the once-overlooked Ohio State backup-turned-LSU National Champion and Bengals resurrector.

The Titans have surpassed their projected win total in every season and reached the playoffs in three of the four years since Vrabel was appointed head coach in 2018, while only four teams own a better record than Tennessee (48-27) in that period. His consistency comes despite disparity in production either side of the ball, the Titans ranking 20th (2021) and 21st (2018) and no higher than 10th (2019) in total DVOA in his four full seasons in charge thus far: Vrabel's offense has been top 10 in DVOA just twice (sixth in 2019, fourth in 2020) between ranking 23rd in 2018 and 20th in 2021, while his defense has finished 18th, 18th, 29th and 12th since his introduction. He gets by without being spectacular.

"It starts with intelligence and toughness, those are the two things Mike Vrabel stands on," former three-time Super Bowl winner and three-time NFL Executive of the Year Scott Pioli recently told Sky Sports, having been with the New England Patriots during Vrabel's time there as a player. "He's extremely intelligent. Not just with football, but just in life, he pays attention, he listens with his ears and eyes, he sees everything that is going on. When it comes to toughness, I spent 26 years in the NFL, I don't know too many people that are tougher mentally and physically than Mike Vrabel.

"He just has this ability and strength about his personality where he knows his limitations but has no problem pushing himself. Those are the tenants on which he has built his football team." Elsewhere Burrow has overcome a torn ACL as a rookie in 2020 and a league-high 51 sacks in 2021 to lead the Bengals to the Super Bowl, by way of an 18-point comeback AFC Championship Game win over the Kansas City Chiefs in Arrowhead, and snap a run of five losing playoff-less campaigns inside two seasons since being selected No 1 overall. And he is spearheading their postseason pursuit again at present having spent much of the summer putting weight back on in the wake of his appendix rupturing, while currently standing as the most sacked quarterback in the NFL (115) during the time he has been in the league.

"Joe Burrow is unbelievable, he simply has the guts off a burglar, he's fearless, he can put the ball anywhere he wants to put it," NFL analyst and former offensive lineman Brian Baldinger told Sky Sports. "As accurate as anybody in this business. And he's just as tough as can be, he gets hit, he gets sacked and he just keeps coming right back at you. They're chasing the Baltimore Ravens right now because of Joe Burrow's ability."

In three games without Chase, Burrow has thrown for 793 passing yards at a completion percentage of 70.5 for seven touchdowns and three interceptions as the second-highest-graded passer in the league since Week Eight. He delivered in Joe Cool style again in Sunday's 37-30 win over the Pittsburgh Steelers, leading a 10-play 92-yard drive iced by a touchdown pass to Samaje Period to go up 17-10 in the second quarter before adding welcome insurance to a four-point advantage with 9.33 remaining in the fourth with an eight-play, 93-yard march capped by another scoring strike to Perine to hoist Cincinnati towards victory. 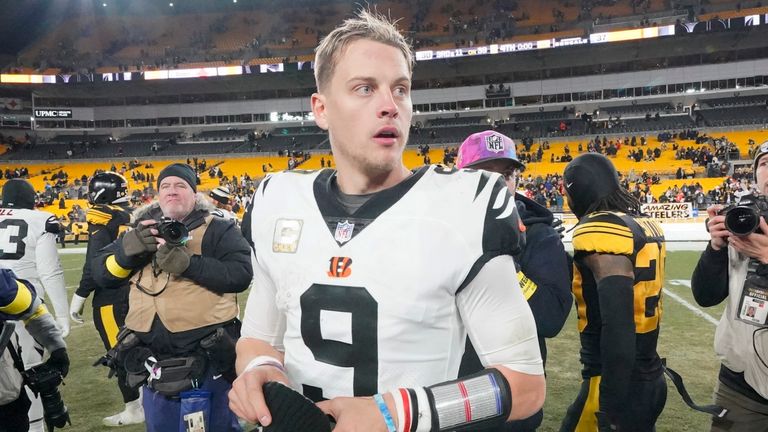 "Joe Burrow, he might not be the guy that's always mentioned with (Patrick) Mahomes and Josh Allen but he's definitely right up there as one of the best quarterbacks in the league."

Burrow was a perfect 11 of 11 for 159 yards across the two possessions, having also connected with Trenton Irwin on a one-yard backfoot, off-platform touchdown dagger with a completion probability of 47.5 (Next Gen Stats) to cap a seven-play drive that put the Bengals up 24-20.

Where others might have withered in the face of a healthy, TJ Watt-boosted Steelers defense, Burrow elected to take over and to call game. In doing so he also tied Kurt Warner for third fastest player to 10,000 career passing yards in NFL history (36 games) behind Justin Herbert (35 games) and Patrick Mahomes (34 games).

Vrabel had been doing Vrabel in Thursday night's 27-17 win over the Green Bay Packers at Lambeau Field: a run-focused defensive plan had limited Derrick Henry to 87 yards from 28 carries, so instead Vrabel and offensive coordinator Todd Downing turned to Ryan Tannehill and recently-injured rookie receiver Treylon Burks as the Titans reeled off their most productive passing game of the year. The week before Henry had been reduced to 53 rushing yards against the Denver Broncos, so they turned to 2020 undrafted receiver Nick Westbrook-Ikhine for a two-touchdown performance to help thwart a top-three defense. 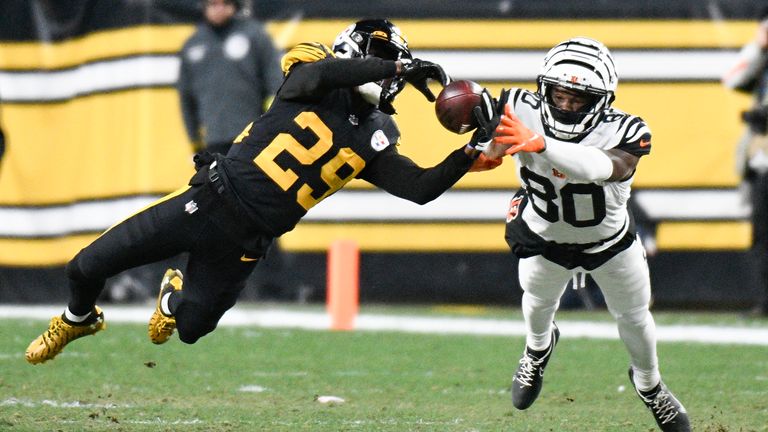 He finds an answer, just as he did after losing back-to-back rushing champion Henry to injury for nine games last season, only to extract a combined 916 rushing yards from D'Onta Foreman and Dontrell Hilliard in his absence on the way to the AFC South title at 11-5 (one win off the No 1 seed in the AFC) and a Divisional Round playoff against the Bengals, where they were eventually halted 19-16. By the end of the campaign Vrabel had fielded an NFL record 91 players amid the team's barrage of injuries.

Tough faces tough in Week 12. Burrow has been pressured on a tied-fourth most 118 dropbacks in the NFL so far in 2022, though enters the game with a second-best 109.5 passer rating under pressure having averaged a fifth-quickest time to throw of 2.58 seconds (Next Gen Stats). The Titans meanwhile lead the NFL with 143 quarterback pressures while having one of the league's lowest blitz rates as Vrabel and Shane Bowen continue to provoke envy elsewhere with their four-man rush success up front, which has contributed to their No 1 ranked third down defense. That is while

Vrabel is a clock management wizard, an empathetic and natural man manager and motivator, a gifted defensive mind and a respected demander of unflagging high standards. Burrow is an unflappable pocket pilot with unerring accuracy, veteran processing, off-script artistry and a complaint-free attitude to team adversity. Both as mentally and physically tough as can be found in the NFL, in which they will boast no shortage of admirers.