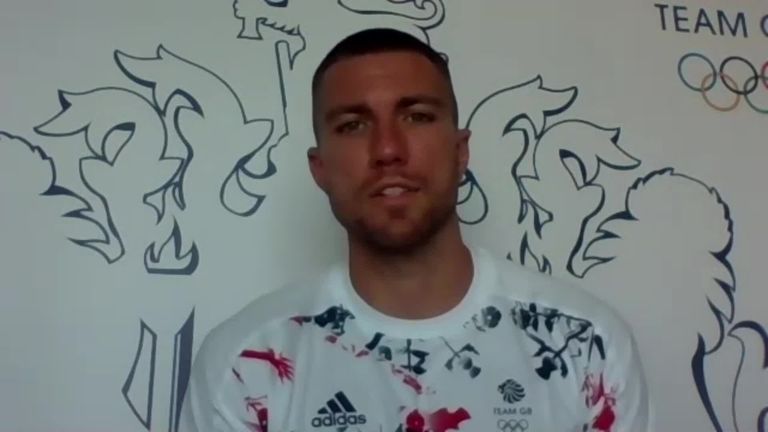 Great Britain's 110m hurdler Andrew Pozzi says his pre-Tokyo 2020 Olympics training suggests he arrives at the Games as good as ever despite a lack of competitive racing this season.

Pozzi, 29, is targeting his first Olympics medal in his third appearance after previously competing in London, where he pulled up injured in the heats, and Rio.

During the 2020 season, disrupted by the coronavirus, Pozzi signalled he had the ability to be a medal contender for the delayed Tokyo Games by running three of the six fastest times in the world.

However, after beginning 2021 with European Indoor 60m silver he has overcome some "minor obstacles" which have prevented him from putting into competition the hard work he has made at his Formia base in Italy.

"I have had a couple of bumps, interruptions in the last six weeks," Pozzi told Sky Sports News after arriving in Tokyo.

"I come in with a lot of confidence from that. I have not had a great race season in terms of opportunities this year, it has been much more difficult."

Pozzi was third behind Jamaican duo Ronald Levy and Omar McLeod at the British Grand Prix in Gateshead in his most recent event earlier this month - just his fifth race over the 110m hurdles this year.

"Being objective, looking at the season, I am probably coming in being ranked 10th," added Pozzi, who is yet to go to sub-13.25 this year.

"There are a lot of people that have run fast times this year. It's definitely not a case of me and there are two other people going for it. It is a very competitive event this year.

"I would definitely love to win a medal but being realistic my focus is very much running season's best or personal best in as later round as possible, ideally that is the final.

"I need to give a performance that I am proud of and usually that level of performance would challenge for a medal.

"I haven't run the fastest time so far yet in competition, but my training objectively tells me that I am as good as I have ever been and better."

Conditions in Tokyo are hot and humid but Pozzi says he is not fazed that and will be well prepared when the competition begins on August 3.

"Where I train in Formia it is exceptionally hot, very stuffy at times," he said.

"I have come from a climate where it feels 30 degrees every day and it is much hotter to be honest so I am very used to it.

"I am not probably someone who says 'this is great' but it doesn't concern me. Maybe it would have done more so in the past. But it doesn't really factor into my thinking."