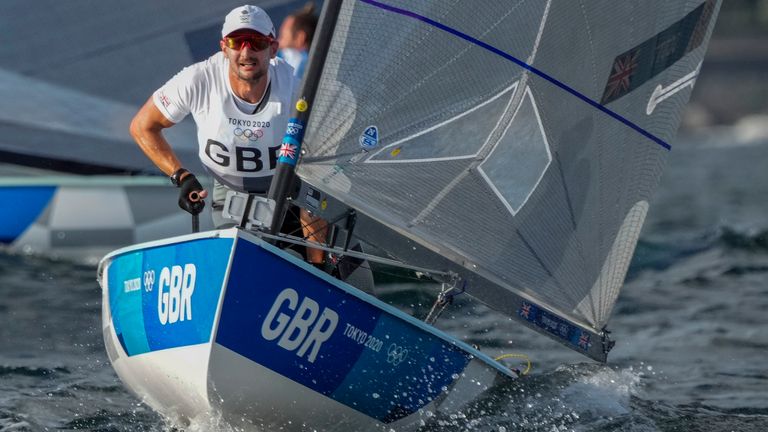 Great Britain's Giles Scott has won the gold medal in the men's Finn class to retain his Olympic title in Tokyo.

It is Britain's sixth successive title in the boat dating back to Iain Percy's success in Sydney 21 years ago. Ben Ainslie then won three consecutive titles before Scott clinched his first gold in Rio.

He had a nine-point lead going into the final medal race but had to play catch-up after a poor start and crossed the line in fifth, which was just enough to keep him ahead of Hungary's Zsombor Berecz.

Scott left himself a lot of work to do after fearing he had gone too early and decided to go back across the start line.

He said: "I don't think I was over at the start but I played it super safe because that was the only way I could mess things up. I made the call to go quick and then I had quite a lot on.

"I made it by the skin of my teeth, it was properly to the wire, it was really tight. I tried to stay relaxed but I've never been involved in a boat race as close as that."

The gold medal for Scott follows Dylan Fletcher and Stuart Bithell's triumph in the 49er men's race at the Enoshima harbour earlier on Tuesday.

The double gold medal triumph made it three sailing medals overall at the Tokyo Games following Emma Wilson's bronze in windsurfing and took Britain's total number of golds to 13 at these Olympics.

John Gimson and Anna Burnet then picked up a silver medal in the mixed Nacra 17.

In the 49er class, Fletcher and Bithell went into their final medal race, where double points are awarded, in second, four points behind New Zealand's Peter Burling and Blair Tuke, but the narrowest of victories for them and third for New Zealand saw the British pair claim the title.

Fletcher and Bithell's biggest obstacle turned out to be Germany but, having taken the final turn in second, the British pair just edged over the finish line in front.

The two 49er medal races were among those postponed from Monday due to a lack of wind at the harbour, and competitors were glad to get out on the water after a day of inactivity as winds picked up on Tuesday.

Gimson and Burnet were guaranteed a medal going into the final race of the mixed Nacra 17 and finished safely in fifth to stay in second place behind Italians Ruggero Tita and Caterina Banti.

Britain are also favourites to win a fourth sailing gold in the women's 470 on Wednesday, with Hannah Mills and Eilidh McIntyre holding a dominant lead and already certain of a medal.