Jack Laugher says overcoming his personal difficulties to win bronze at Tokyo "means more" than his gold at the Rio Games in 2016; The 26-year-old revealed Simone Biles speaking out about her own difficulties with mental health helped him validate how he felt 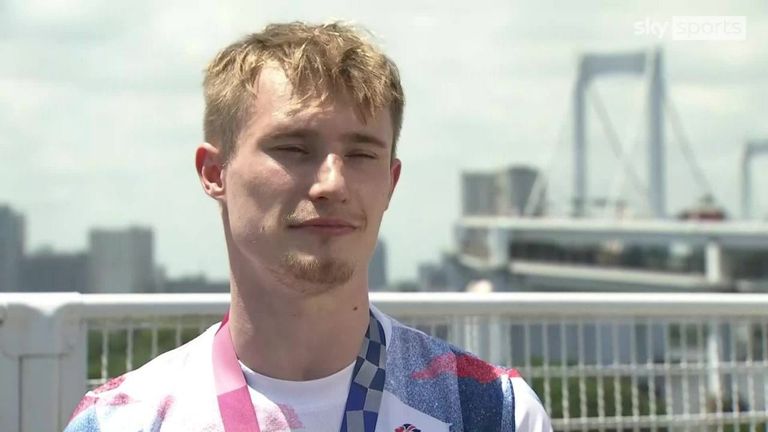 British diver Jack Laugher says he almost quit the sport due to struggles with mental health - and overcoming those difficulties to win bronze in Tokyo "means more" than his gold medal at the Rio Games in 2016.

Laugher reflected on the triumph as a personal victory which "meant everything" to him and showed that his hard work through extremely challenging times had paid off.

"It felt just amazing. It felt like a huge weight off my shoulders yesterday," Laugher said.

"I've been through a lot over the last couple of years. My diving career has really taken a turn for the worst and my mental health has done the same as well.

"But yesterday felt like a triumph. It felt like a culmination of a lot of hard work, love and support from a lot of people and I just broke down.

"I was so nervous going into my last dive but I really tried to stay concentrated and as soon as I saw that I was on the podium I was just so relieved that everything that I've overcome, I felt like I'd finally started to put it behind me and like I was finally back to myself again."

Laugher spoke of how he suffered a huge dent in confidence during the World Championships in 2019 and this saw him fall into a rut which he struggled to get out of.

"I pretty much failed my last dive when I was so far ahead, going for my first World Championship title," said Laugher.

"I slipped from first to third place and that one really affected me massively. My confidence was in an absolute state.

"Then the problem kept persisting and that was when it really started to affect my mental health. I couldn't get out of the rut, I couldn't understand why it was happening.

"I was turning up to training every day and giving it 110 per cent and I was still making this mistake day in, day out. I had massive anxiety around training, a tremendous struggle of actually being physically scared of the dive which I've never had before.

"I utilised my friends and family so much and pulled on them to help me, and they are the people who helped me out of the rut.

"When I was at my lowest, I wanted to quit because I wasn't enjoying it, I hated it, it was awful and there's only so much a man can take really.

"But now I'm here with a medal around my neck I feel like it's redemption, I feel like I'm back and hopefully I can use this momentum now to keep pushing myself forward and trying to be the best version of me I can be."

American gymnast Simone Biles withdrew from the women's team all-round final to protect her mental health, and Laugher admitted this helped him validate his own feelings and emotions towards his own personal difficulties.

Biles, who later pulled out of the individual vault and uneven bars finals, followed by the floor final on Sunday, went on to win bronze in the beam final to clinch her seventh Olympic medal.

Laugher said he felt a "massive amount of empathy" for Biles and that the problem she was facing was "extremely similar" to what he was going through.

"It very much made me feel like a superhuman athlete like Simone Biles, one of the best we'll ever see is going through a problem like that, that I myself am going through.

"It really helped me confirm that my feelings are real, it was a very real thing that I was going through.

"I think that's the amazing thing about these Games - people have been talking about mental health more than ever and for a lot of people it will hopefully validate what they're going through at home and feel like they can start making progress and start getting the help they need and deserve."