Sky Brown, 13, became the youngest GB medallist at a Games, surpassing the record set by former swimmer Sarah Hardcastle who won silver and bronze aged 15 in 1984; Brown: "I'm going to go on some surf trips and skate a little bit and hopefully get into the Olympics for surfing and skating" 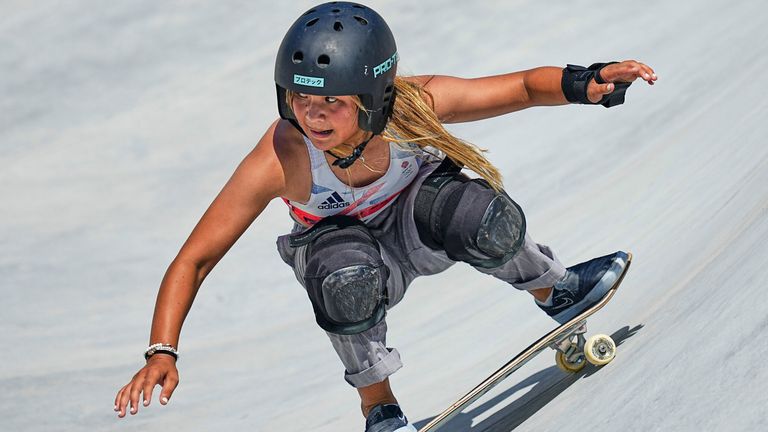 The 13-year-old won a fantastic bronze in the women's park skateboarding event on Wednesday with Japan's Sakura Yosozumi (19) and Kokona Hiraki (12) taking gold and silver.

She fell twice while attempting a Kickflip Indy trick in her first two runs but recovered well and held her nerve on the final run to secure a podium place and replace former swimmer Sarah Hardcastle as Britain's youngest summer Games medallist.

But just over 12 months after suffering a fractured skull and broken bones in her arm during a practice session, one sport and a third-place finish at her first Olympics isn't enough for X-Games champion Brown, who is aiming to take part in another new Olympic sport, surfing, in 2024.

She may have her work cut out, though, because two years ago, Paris organisers chose Tahiti in the South Pacific - which is 9,760 miles (15,700km) from the French capital - as the location for the Games' surfing competition.

When asked whether she plans to compete in three years, Brown told Sky Sports News: "I hope so. When I get back home I'm going to be surfing a lot.

"I've been surfing a lot before I came here too and I think I'm going to go on some surf trips and skate a little bit and hopefully get into the [next] Olympics for surfing and skating." 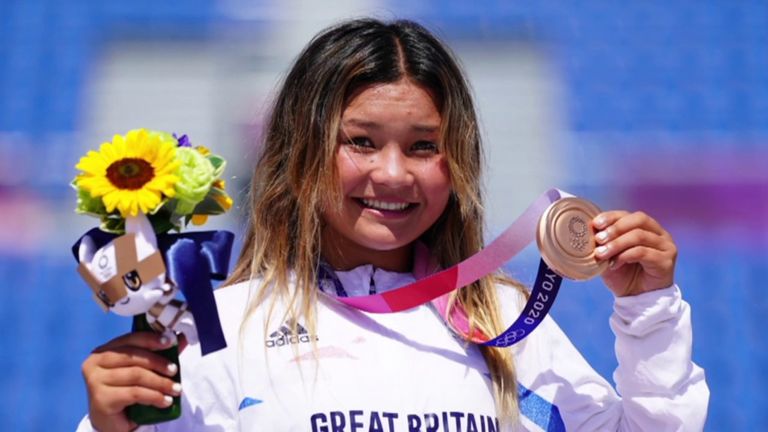 Born in Miyazaki, Japan, to a British father and a Japanese mother, Brown competed at the US Open in 2016, was first selected to compete for GB in 2018 and finished third at the World Skateboarding Championships a year later.

Her father and coach Stu was watching on at the Ariake Urban Sports Park and Brown celebrated her latest achievement with family back at home via a video call before claiming her bronze medal alongside Yosozumi and Hiraki on the podium.

Sky Brown, 13, has won the bronze medal in the women's park skateboarding event for Team GB, becoming the youngest British medallist at the summer Olympics.

Reflecting on her unprecedented success, Brown said: "It's insane, I mean it was unbelievable. I was speechless, I had so many things going through my mind and having the medal was incredible.

"I just try to enjoy the time. Having my friends there doing really well, it just made me really happy."

The youngest person to win an Olympic medal in #TeamGB history 🇬🇧

An unbelievable achievement from the extraordinary Sky Brown 🥉#Tokyo2020

On her setbacks earlier in the final, she said: "It made it [the bronze medal] feel even better, I was definitely a little shocked because I was expecting to get a little faster than that but I got it and I'm happy."

Brown winning the park skateboarding bronze medal is expected to provide inspiration for girls nationwide to take up the sport and the young Olympian wants people her age to try and get involved in various disciplines until they find an activity they enjoy.

She explained: "Skateboarding is a really beautiful, very cool sport. I think lots of people will love it and you can do it anywhere, you know?

"You don't have to find a [skate] park, you can do it on a flat run. Everyone can skate.

"If you haven't found a sport yet then just do it all. I think you can do all different kinds of sports and that's what I do. Just get out there, try new things and take baby steps and see what happens."