Tokyo 2020 Olympics: Adam Peaty and Tom Daley go for gold in the pool

Adam Peaty could become the first British swimmer to retain an Olympic title in the 100m breaststroke; triathlete Jonny Brownlee hopes to go one better than silver in 2016 and American superstar Katie Ledecky defends her 400m freestyle crown against Australian rival Ariarne Titmus

Monday at the Olympic Games will see Adam Peaty aiming to become the first British swimmer to retain an Olympic title in the pool, while Tom Daley goes in search of an elusive gold in the men’s 10m synchro event.

Having gone unbeaten in the past seven years, Peaty gets the chance to make history in Tokyo, with the final taking place at 3.12am BST.

In total, 21 medals will be on offer on Monday, including for the first time ever in women's skateboarding.

Meanwhile, the first canoe slalom medal racing takes place and the rugby sevens competition is set to get underway.

What not to miss

Peaty could make history in Japan as the first British swimmer to defend his Olympic title.

With a record six world titles over 50 and 100m, he's perhaps the most dominant force in Team GB's entire squad out in Tokyo.

Until April 30, the top 20 fastest swims ever in the event had his name next to them.

After setting a new world record to take gold in 2016, even Olympic legend Michael Phelps was impressed: "That's one of the grossest swims I've seen. I'm just glad I don't have to race him."

Peaty's current world record time is more than a second faster than his nearest rival Arno Kamminga, making the 26-year-old red hot favourite to triumph in the Japanese capital.

Appearing at his fourth Olympics, Daley will be desperate to finally come out on top in the men's 10m synchro event alongside debutant Matty Lee.

After becoming Britain's youngest ever summer Olympian at the age of 14 in Beijing in 2008, he went on to secure individual bronze at his home Games in London in 2012.

The 27-year-old failed to reach the individual final at the last Games, but has since gone on to win a second world title in 2019.

He's got form in this particular event too, having claimed bronze in Rio de Janeiro in 2016 with Daniel Goodfellow.

With Phelps having retired after Rio with an astonishing 23 Olympic gold medals, Ledecky has the chance to become the new face of swimming, as she targets four individual titles in Japan.

The American will have to be at her best though if she's to stave off the threat of Ariarne Titmus, who handed the 24-year-old her first defeat over 400m at a major event in the 2019 World Championships.

The Australian has also recorded the fastest time in the world this year over the distance.

Jonny Brownlee aims to top the podium in the triathlon around Odaiba Marine Park.

His brother Alistair is the two-time defending champion, with Jonny taking bronze in 2012 and silver in 2016.

However, Alistair has failed to qualify this time, leaving Jonny and Alex Yee, who booked his spot after winning the World Triathlon Series event in Leeds, to carry British hopes on this occasion. 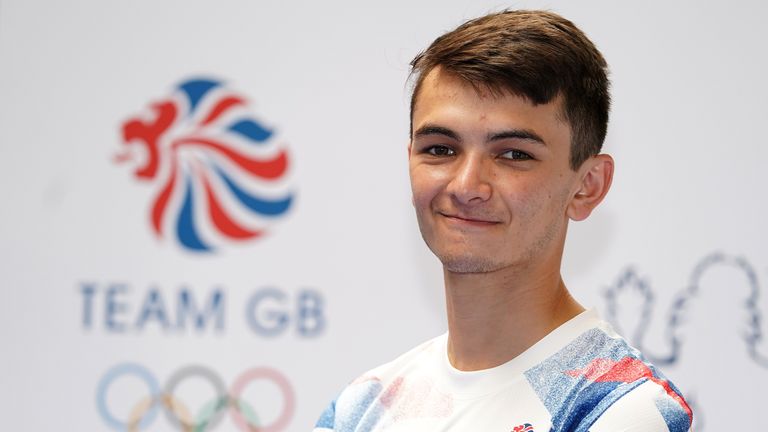 Olympic debutant Adam Burgess, who is a European silver medallist and multiple World Cup medallist, hopes to be involved in the first canoe slalom medal racing of the Games in the C1 event.

As Britain's lone fencer in Tokyo, Marcus Mepstead has an outside chance of success in the men's foil event, having won world silver two years ago in the event.

The rugby sevens kicks off on Monday when Team GB's men face a double header against Canada and hosts Japan.

The Brits, who sealed silver as the sport made its Olympic debut in Rio, will bid to go one better this time around, but face stiff competition from the likes of New Zealand, South Africa and current holders Fiji, with the contest for gold scheduled to take place on Wednesday.

Great Britain's men's and women's hockey teams, meanwhile, are both in action in their second pool games as the men face Canada before the women's encounter with South Africa.

Where the medals will be won

The maiden women's skateboarding medals will be handed out in the street event at the Ariake Sports Park. At 00.30am BST the first of four preliminary heats will take place before the final starts at 4.25am BST.

Leticia Bufoni will be hard to beat, with the Brazilian having been crowned X Games champion on five occasions.

In gymnastics, Japan bid to defend their title in the men's team event after edging out Russia and China at the last Games.

The reigning champions will be without legend Kohei Uchimura though on home soil as he's chosen to focus on the individual events.

A mixed doubles event will feature in the table tennis at the Olympics for the first time.

That's good news for China, who have claimed 28 of the 32 gold medals awarded since the sport was introduced to the Games in 1988.

Meanwhile, the course for the men's mountain bike cross-country event features Mount Fuji and has been described as one of the most beautiful ever created at an Olympics.