The 23-year-old performed the role at the end of a measured and poignant Opening Ceremony at the Olympic Stadium in Tokyo; the four-time Grand Slam winner is the first tennis player to be handed the honour in Olympic history

Naomi Osaka was given the honour of lighting the Olympic cauldron at the Opening Ceremony of the delayed Tokyo 2020 Games.

The 23-year-old tennis player follows in the footsteps of a long line of iconic athletes who have been chosen to light the Olympic cauldron at a Games.

In Atlanta back in 1996, Muhammad Ali created one of the most powerful moments in the Games' history before Cathy Freeman did the same, four years later in Sydney. At the most recent Games in Rio de Janeiro, the honour was handed to Vanderlei Cordeiro de Lima.

The Olympic Cauldron has been lit! 🔥@naomiosaka does the honours as the curtain rises on #Tokyo2020. #OpeningCeremony | #StrongerTogether pic.twitter.com/6bYlwnMDfh

Osaka, who has been open about her mental health struggles recently, received the torch at the end of a relay that included great icons of Japanese sport, key workers, and children from regions affected by the earthquake and tsunami 10 years ago.

Prior to the ceremony taking place, it was thought Osaka might have a key role to play, after her first-round match was removed from the schedule for Saturday.

The lighting of the cauldron by Osaka came at the end of a considered and measured ceremony. It was titled 'United by Emotion' and delivered inside an empty Olympic Stadium in Tokyo.

"Undoubtedly the greatest athletic achievement and honour I will ever have in my life," Osaka said after the ceremony on social media.

"I have no words to describe the feelings I have right now, but I do know I am currently filled with gratefulness and thankfulness. Love you guys, thank you."

Undoubtedly the greatest athletic achievement and honor I will ever have in my life. I have no words to describe the feelings I have right now but I do know I am currently filled with gratefulness and thankfulness ❤️ love you guys thank you. pic.twitter.com/CacWQ5ToUD

When Thomas Bach, the International Olympic Committee president, addressed the athletes within the arena, as well as the few members of the media and dignitaries that were allowed to be present, he delivered a message of solidarity and resilience.

"Today is a moment of hope," Bach said. "Yes, it is very different from what all of us had imagined but let us cherish this moment because finally we are all here together.

"This is the power of sport, the message of solidarity, peace, and resilience. 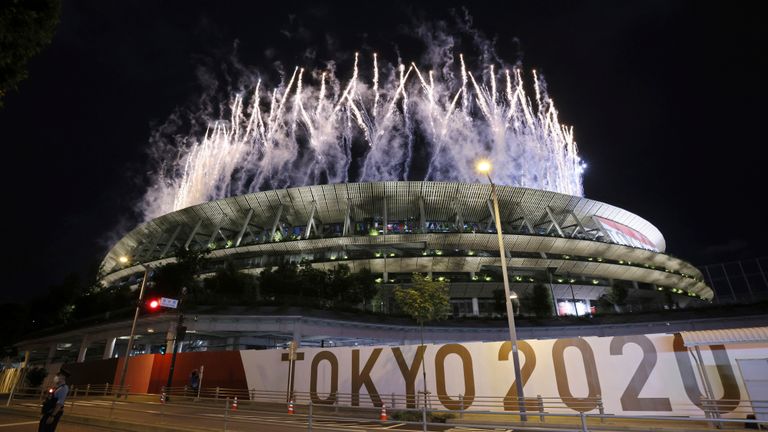 "My fellow Olympic athletes, you had to face great challenges on your Olympic journey.

"You did not know when you could train again, if you could see your coach tomorrow, if your teammates would be with you for the next competition, or if this competition would take place at all.

"You struggled, you persevered, you never gave up. And today you are making your Olympic dream come true. You are true Olympic athletes."

The ceremony was respectful of the current circumstances, with the majority of countries taking much smaller delegations of athletes than usual to it. The scale of the arrangements within the ceremony were also smaller than would otherwise have been the case.

The Olympic Flag is carried into the stadium by six athletes who have given their time and talent to serve as essential workers in their local communities.

A moment of silence featured to remember those who had been lost to COVID-19 and the Olympians who had passed away, including the Israeli athletes who lost their lives in Munich 1972. A revised Olympic motto was also shared: Faster, Higher, Stronger - Together.

The Olympic rings were constructed out of wood that came from trees grown from seeds brought by international athletes the last time Tokyo hosted the Olympic Games in 1964, while a performance of every sport's pictogram in succession and a drone display provided further uplifting moments.

Team GB were represented at the ceremony by just 22 athletes in total, with Hannah Mills and Mohamed Sbihi carrying the Union Jack flag together.