Tokyo 2020: Olympic champion Simone Biles out of team finals due to 'medical issue'

Simone Biles' bid to claim her first Olympic gold of the Tokyo Games suffered a setback as she was forced to withdraw after one rotation of the women's team final; Biles misjudged her opening vault, scoring 13.766, the lowest of the first rotation 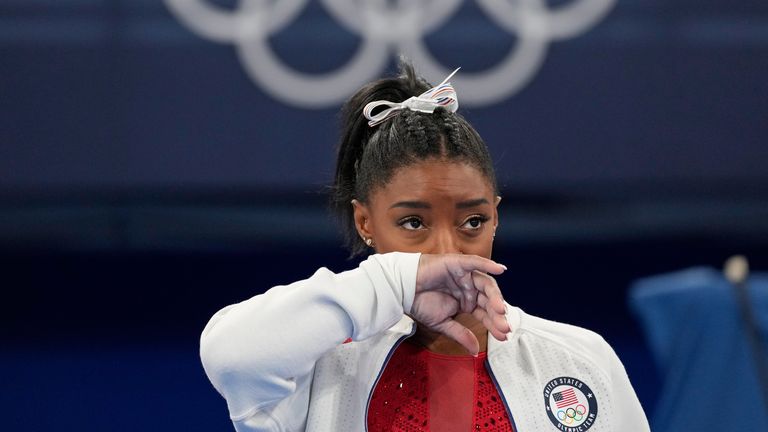 Reigning Olympic gymnastics champion Simone Biles was forced to withdraw from the team finals because of a "medical issue".

The 24-year-old US star, considered to be the greatest gymnast of all time, huddled with a trainer after landing her vault. She then exited the competition floor with the team doctor.

Biles returned several minutes later with her right leg wrapped. She took off her bar grips, hugged team-mates Grace McCallum, Sunisa Lee and Jordan Chiles before putting on a jacket and sweatpants.

A statement from USA Gymnastics read: "Simone Biles has withdrawn from the team final competition due to a medical issue.

"She will be assessed daily to determine medical clearance for future competitions."

The Americans will be forced to finish the rest of the competition without her, severely hampering their bid to claim a third straight Olympic title.

Biles arrived in Tokyo as the unquestioned star of the Games but struggled, at least by her high standards, during qualifying.

In a social media post on Monday, she admitted she felt like the weight of the world was on her shoulders and that the Olympics were no joke.

Biles won five medals in Rio de Janeiro five years ago and had a chance to top that after advancing to all five finals.

It remains to be seen whether she will be available for the all-around final on Thursday night and the event finals later in the Games.

The United States trailed the Russian Olympic Committee by 2.5 points after two rotations.