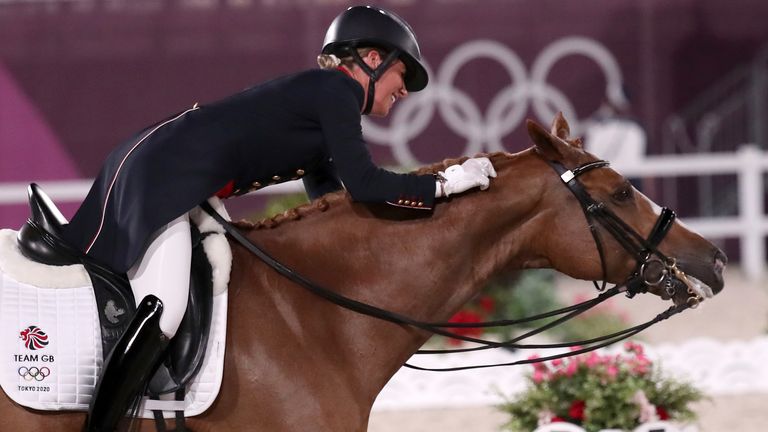 Charlotte Dujardin became Great Britain's most decorated female Olympian as she claimed bronze in the individual dressage aboard Gio at the Tokyo Games.

Dujardin had joined rower Dame Katherine Grainger and tennis player Kathleen McKane Godfree on five medals when Team GB took bronze in the team dressage event on Tuesday, and she added her sixth Olympic medal at the end of a dramatic day at Equestrian Park.

Dujardin and her horse Gio were in third place after the penultimate ride of the day, and there was an anxious wait as Germany's Dorothy Schneider and Showtime FRH took to the arena. However they could not do enough to overtake the British pairing and the bronze medal was secured.

Dujardin has now claimed three gold medals, one silver and two bronze medals in her Olympic career, which started at London 2012 and while her nine-year reign as Olympic individual dressage champion ended on another night of German domination, a podium finish saw her break the record of five Olympic medals.

It was a remarkable performance by 36-year-old Dujardin, given her horse Gio was contesting in his first major championship. She won double gold at London 2012, then individual gold and team silver in Rio, before collecting two bronze medals in Tokyo.

The gold medal went to Germany's Jessica Von Bredow-Werndl with TSF Dalera on 91.732 per cent, ahead of fellow German and silver medallist Isabell Werth, riding Bella Rose 2, on 89.657 per cent.

Dujardin posted 88.543 per cent after a display that almost defied logic, given how little Gio had done in terms of his career at the sport's elite level.