Sakura Yosozumi, 19, and Kokona Hiraki, 12, claimed gold and silver in the women's park skateboarding event; Sky Brown went into the Games as Great Britain's youngest athlete and has come back from suffering a fractured skull and broken bones last year

Sky Brown has been crowned Great Britain's youngest Olympic medallist after claiming bronze in the women's park skateboarding event at the Ariake Urban Arena in Tokyo.

After falling in her first two runs of the final, the 13-year-old nailed her last attempt with a score of 56.47 to finish behind Japanese pair Sakura Yosozumi and Kokona Hiraki.

Aged just 12, Hiraki duly eclipsed Brown to become the youngest Olympic medallist in 85 years. Favourite Misugu Okamoto fell on her final run and missed out on the podium.

Brown's achievement is all the more remarkable for the fractured skull and broken bones she suffered during a horrific fall in training last year.

She posted a video clip of the fall on her Instagram account, which has approaching one million followers, along with the message: "I'm excited to come back even stronger and even tougher. My heart wants to go so hard right now."

Brown, who was born in Miyazaki, Japan, to a Japanese mother and British father, competed at the US Open in 2016 at the age of eight, and was first elected to compete for Great Britain in 2018.

She arrived with plenty of profile, having won the US version of Dancing With The Stars: Juniors in 2018, and expressed her ambition to achieve the almost unprecedented feat of competing in two sports - skateboarding and surfing - at the Games, something from which she was subsequently dissuaded.

The youngest ever person to win a summer Olympic medal for #TeamGB pic.twitter.com/yEh5T0Ov5b

In 2019, Brown finished third at the World Skateboarding Championship, and the following year she effectively secured her Olympic qualification by winning a bronze medal at the Park World Championships in Sao Paulo, Brazil.

Last month, she warmed up for the Games by winning gold in the prestigious X Games, although neither of her key Olympic challengers, Okamoto and Hiraki, were present.

Hiraki was first up of the major contenders in qualifying amid the hottest day of the Games so far, with the temperature tipping 32 degrees with 90 per cent humidity.

The 12-year-old's best score from three runs, 52.46, was comfortably surpassed twice by Brown, with the Briton recording a best of 57.40 before Okamoto, the 15-year-old reigning world champion, laid down her mark with a leading 58.51.

Another Japanese skater, Yosozumi, raised the level in the final with a first run of 60.09 which would ultimately prove enough to give her the gold medal, while 12-year-old Hiraki posted an imposing 59.04.

Brown and favourite Okamoto struggled with a trick known as the kick flip indy, leaving both facing the prospect of having to go clean on their respective final routines to reach the podium. 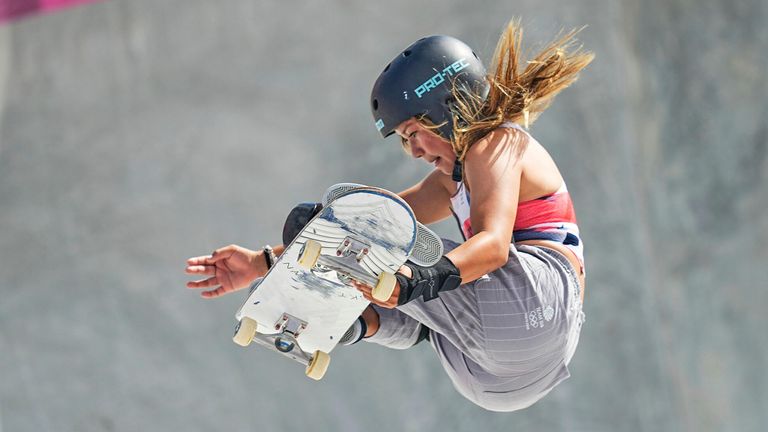 Brown stepped up when it mattered, her third score nudging her to bronze before another fall by Okamoto confirmed the Briton's historic medal.

Reflecting on her bronze medal, Brown said: "I'm so stoked. I can't believe it, it's unbelievable. I'm so happy to be on the podium with these guys, it's insane.

"The medal feels unreal, it's like a dream. I can't wait to show the medal to my family and friends.

"Sakura [Yosozumi] said, 'you've got it Sky, I know you're going to make it', and that really made me feel better.

"I really hope I inspire some girls. I feel like people think I'm too young and I can't do it but, if you believe in yourself, you can do anything. I believed in myself and I'm here."