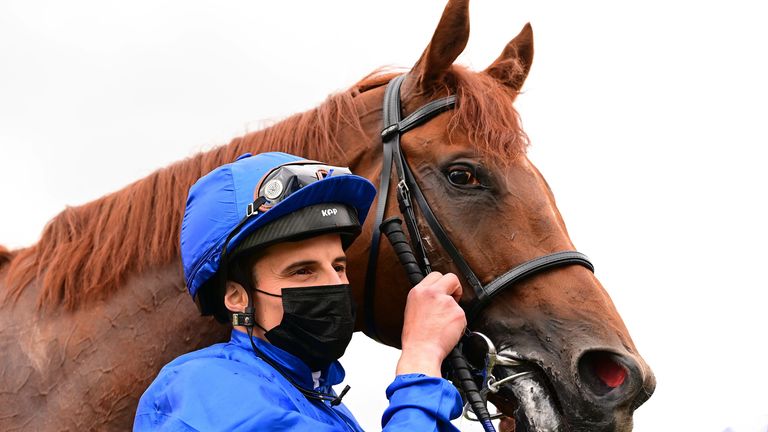 Hurricane Lane stormed to a decisive victory in the Grand Prix de Paris to double his Group One tally for the season and leave connections believing they have a "serious contender" for the Prix de l'Arc de Triomphe.

Charlie Appleby's Irish Derby hero, ridden once more by William Buick, was prominent throughout at ParisLongchamp, running past Aidan O'Brien's pace-setter The Mediterranean with apparent ease.

The son of Frankel, who was third in the Cazoo Derby at Epsom despite losing two shoes, finished six lengths clear of another of O'Brien's trio Wordsworth in second.

The William Haggas-trained second favourite, Alenquer, was given a patient ride by James Doyle and picked off a few rivals late-on for third, with The Mediterranean finishing fourth after a brave effort from the front.

Hurricane Lane now has five wins from six career starts and could head back to France next.

Buick told Sky Sports Racing: "It really was a special performance. Yesterday was his fifth race this season and he's been in some battles. He's a horse with a fantastic constitution and is obviously blessed with ability as well.

"Credit to Charlie and the team. He came back from Ireland, they were clearly very happy with him but it was a brave call to supplement him for France.

"Not many horses can deal with those races in that time-frame, it's all really happened quite quickly for him, but if you saw him in the preliminaries last night, he was just the same as he has been in the races earlier in the season.

"I spoke to Charlie after the race and everybody just wants to get him home first and let the dust settle. I will be very surprised if the Arc isn't under strong consideration for him.

"He ticks a lot of boxes. Three-year-olds have a great record in the Arc and last night was a massive box ticked for sure."

Appleby believes he is one of the leading lights in this year's Classic division.

He said: "He's obviously been a very exciting horse to deal with and he's only been beaten once in his life and that was in the Derby when I felt inexperience caught us out. Today's performance has franked him as one of the best three-year-olds in Europe and he's an exciting horse.

"As we always do, we'll allow the dust to settle but you would have to be thinking about him as a serious contender for the Arc.

"We'll give him a bit of a break now because he's run in an English Derby, and Irish Derby and then backed it up two and a half weeks later in a Grand Prix de Paris. He deserves to have a break, but whether he can give himself a break is another thing.

Buick's only other ride on the card at ParisLongchamp ended in disappointment as Joe Tuite's well-backed filly Via Sistina - a 5-1 joint-second favourite - finished last of 10 in the Group Two Prix De Malleret.

The impressive Goodwood winner had raced prominently early but faded to the line, eventually finishing eight-and-a-half lengths behind the winner, Andre Fabre's Babylone.

Buick is likely to partner Hurricane Lane's stablemate Adayar in the King George VI And Queen Elizabeth Stakes at Ascot on July 24.

The Cazoo Derby winner will attempt to become the first horse since Galileo in 2001 to complete the Derby-King George double as the three-year-old takes on older horses for the first time in his career.

"Adayar was very good in the Derby, he was an emphatic winner," Buick said.

"It's a different test for him, taking on older horses for the first time, but the team are very happy with him we're looking forward to it.

"Physically, it looks like he's got stronger and natural progression would suggest he'll improve.

"He's already a brilliant Derby winner so as long as he can stay at that level, that's pretty good."