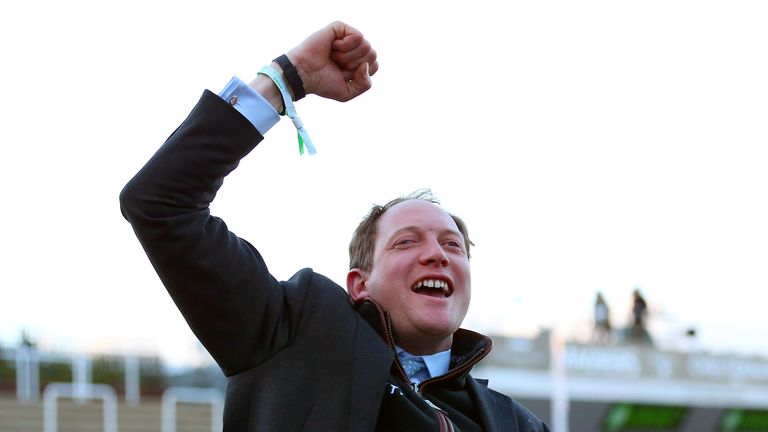 Trainer Ben Pauling is hoping for an exciting season as he puts the finishing touches to a new yard, built on an active golf course in Gloucestershire

Ben Pauling is hoping to come out swinging this season as he puts the finishing touches to a new yard built on an active golf course in Gloucestershire.

The Cheltenham Festival-winning trainer has developed a new facility at Naunton Downs Golf Club, now run by his wife Sophie, which includes a 95-box stable, gallops and an area for owners.

After something of a "nothing year", which did include one Grade Two success with The Cob in the River Don Novices' Hurdle at Doncaster in January, Pauling is keen to hit the ground running in this campaign.

His team includes plenty of novice chase prospects, headlined by Your Darling and the Harry Redknapp-owned Shakem Up'arry.

Pauling told Sky Sports Racing: "Last year, for so many reasons, was just a bit of a nothing year. We had enough winners but without the owners it was tough going.

"I feel very excited about the season ahead. We're in the closing stages of building our brand new yard and it's an exciting time with some very nice horses.

"We purchased a golf course back in January 2020 and the yard is integrated throughout the course.

"There a few rules, such as if the horses are on the course, you have to wait to play your shot. It will be fun to have the two work alongside each other."

"He was a remarkable horse last season, he just didn't look back. In the River Don he was really quite smart.

"Cheltenham [Albert Bartlett Novices' Hurdle] was probably a race too far. I don't think he was out of his depth, just nothing really went right for the English at Cheltenham this year.

"He's schooling well over fences and we'll be looking to get him out in early November.

"He's quite an obnoxious horse in that he doesn't really respect hurdles but he's always jumped baby fences with more respect so hopefully this is his game.

"He stays very well and is rated in the mid 140s, so if converts that he could be quite useful."

"He's been beaten by some very nice horses and only won one race, which is rather extraordinary.

"He's a real jumping machine and his whole career has been aimed to getting him over fences.

"His schooling has been absolutely spot on and I think he is very well handicapped off his hurdles mark.

"I hope he'll be a really nice chase because Harry Redknapp [owner] and I are really quite fond of this horse."

"He's entered on Tuesday at Huntingdon in a novices' handicap chase and is similar to Shakem Up'arry in that he's a chaser through and through.

"We've always thought plenty of this horse and shows an awful lot at home, but has only shown snippets of that on the track.

"He is probably a three-miler so the fact he was won over two miles is a bonus.

"I'm hoping he can progress through handicaps and become a good horse by the spring."

"He did everything wrong to start with last season but got much better to win a Newbury bumper.

"He probably wasn't himself at Aintree, it certainly wasn't his best performance by any stretch of the imagination.

"He's electric over his hurdles, a real classy hurdler and not devoid of speed. We're going to start him over two miles."

"There's a very nice horse called Guardino who won a bumper at Kempton and came from the Irish point-to-point circuit. We barely trained him for Kempton and he went there half-fit but still managed to win.

"He's come back in so much more relaxed and is a novice hurdler I think will go well.

"De La Mar Rocket won a bumper very impressively down at Exeter. He's going to be a mud-lark but I think a proper type.

"Harper's Brook and Mucho Mas were both pretty good in bumpers last season and are horses who I think, having had some pretty nice novices in the past, can become proper horses.

"Global Citizen had a nothing season last year but seems to be much better. We'll probably dive between hurdles and fences throughout the season but just to get him back on track would be great."