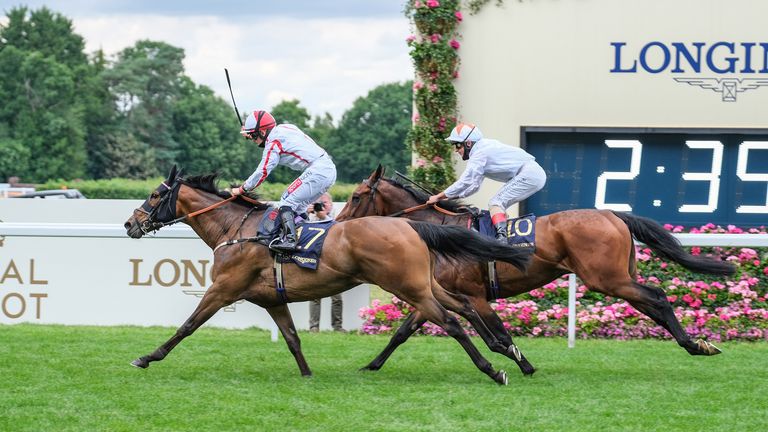 Hollie Doyle says there's still room for improvement for her ahead of QIPCO British Champions Day on Saturday, live on Sky Sports Racing

The 25-year-old has enjoyed a stunning three years, riding 151 winners in 2020, and looks well on the way to beating that tally in 2021 with plenty of the campaign still to come.

She also picked up a first Royal Ascot victory in 2020 onboard Scarlet Dragon in the Duke of Edinburgh Stakes and backed that up this year with a win on Amtiyaz in the Copper Horse Stakes.

"It's definitely my favourite racecourse," Doyle told Sky Sports Racing. "I've obviously had some really good days here and a lot of luck but I think it's such a beautiful track to ride and it's very fair.

"From the four [furlong] to the three, the race really starts to develop and it's quite a deceiving turn for home. Whilst it's a sharp run in, it's pretty stiff so you don't want to commit too soon but you don't want to let them get away from you.

"The straight course is a very stiff mile. From the four-and-a-half, you run downhill for a furlong-and-a-half but then it's stiff uphill as well.

"I find it quite hard to make the running here because you are giving everyone a lead and getting taken on a long way out so you are very vulnerable - it takes a bit to win from the front and I find it's an easier track to take a lead on."

Whilst she has enjoyed plenty of big race success since 2019, Doyle added there is plenty of improvement to come from her on the big stage.

"You see it happen, people have a good year or two like I have, have a quiet year and you don't see them again so I'm always pretty conscious of not letting that happen," Doyle said.

"Tactically, there's a lot I can be better at and hopefully within the next few years, I can ride tighter and sharper and get that experience.

"My first winner was in 2013 as an amateur so it's taken me a while to get where I've got. The last three or four years were pretty good and I really picked up but it was a bit of a struggle before that.

"The problem was I wasn't very good and I knew it. That's probably good because I knew I needed to get better and I didn't think I was the bee's knees when I wasn't.

"I wouldn't change how things have happened for me though.

"When I'm on the horse, I don't really get nervy. Maybe in the morning at home, I would be a bit twitchy but when I'm at the races, I have got a job to do and I feel quite content really."

We also spoke to Hollie about several of her big race victories at Ascot, as well as her thoughts on the upcoming QIPCO British Champions Day meeting, live on Sky Sports Racing.

"He was very settled early on and three parts of the way on the further I was going the better and I'm thinking 'here we go!'

"I went into the race and Alan [King] told me to ride him to run well and get a place but I had Stradivarius on my inside and I was thinking, 'I'm going a bit better than you'.

"I was going so well and remember turning in three down and he just took me to the front and away.

"I couldn't believe my eyes. I was gobsmacked at how far clear he had pulled and I think a lot of people thought it was a fluke or a one-off or that he was a ground dependant horse but he's proven that he's not.

"I felt like I was galloping on a golf course with him as he was handling it so well - he's a true stayer. For a horse that stays that distance, he's actually got a few gears which is quite rare really."

"He's an old monkey! I won the Old Rowley Cup on him as a five-pound claimer a few years ago and I hadn't really ridden him that much in-between.

"Everything just fell perfect - he switched off straight away, didn't pick the bridle up, managed to get the splits up the straight and we got up on the line but he was cooperative that day.

"But that's just him, he's got so much ability but you don't know which horse is going to show up on the day."

"This year has been tricky with him really. He's only had his ground probably once or twice when he was only beaten a length by Dream of Dreams and I can't knock him for that.

"The next two runs were on quick ground which isn't what he wants but we are hoping he can come back on Champions Day and hopefully replicate what he did last year.

"The reason he likes it here and on the soft ground is because he just outstays everything. He's actually ran over 10 furlongs so you know he'll get the trip well!"

"I think everyone looks forward to it. It's a great way to cap off the season with the Champion Jockey and Champion Apprentice being crowned.

"It's a bit more relaxed than Royal Ascot because of the time of the year. It can be a bit of a lottery as it's been a long season and some horses might've had a hard year so I think anything can happen on the autumn ground."