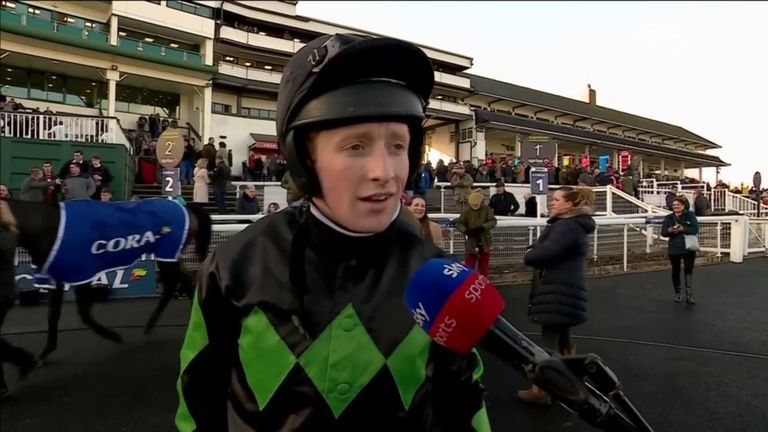 Jockey Stan Sheppard is unsure if he will be back later this month to ride Welsh National hope Iwilldoit at Chepstow, but says whoever gets the job will be able to enjoy their Christmas lunch!

The 24-year-old jockey rode his rivals into submission at the Welsh track as eight-year-old Iwilldoit jumped from the front and was never headed, finishing 24 lengths clear of 9/2 second favourite Colorado Doc.

It capped off a remarkable 24 hours for Sheppard, who landed his first Grade Two victory on Lossiemouth in the Ballymore Winter Novices' Hurdle at Sandown on Friday.

Sheppard told Sky Sports Racing: "He was brilliant today. I threw the reins at him at the start and never looked back. Every time I took a pull, he would nudge his nose out and try to take me on so I just left him to it."

Asked if he would be back to ride Iwilldoit in the Welsh National later this month, Sheppard said: "That's out of my pay grade but I made sure I won by as far as I could so whoever does ride him can have a bit of Christmas dinner!"

Iwilldoit is a general 14/1 (Sky Bet) for the Welsh National, having started the day as a 33/1 outsider.

Ask Me Early put down his marker for the Chepstow Christmas feature earlier on the card with an easy victory in the Play The Coral "Racing Super Series" Novices' Hurdle.

Harry Fry's seven-year-old, a three-time winner over fences last season, was the only finisher of five runners over two-miles and seven-and-a-half furlongs at the Welsh track.

Sky Bet cut Ask Me Early to 6/1 from 8/1 for the Welsh National on December 27, live on Sky Sports Racing.

Fry told Sky Sports Racing: "The proof will be in the pudding when we come back here on the 27th but we were making the most of the fact that he is a novice over hurdles to protect his mark for the big day. That's that box ticked and onwards and upwards.

"The Welsh National is worth a lot more than the trial so fingers crossed we can come back here in similar form and run well. Everything has gone to plan so far and hopefully it stays that way."