Qipco Champion Stakes: Baaeed to take on maximum of nine rivals at Ascot ahead of retirement

The star four-year-old could line up against Derby winner Adayar in the Champion Stakes on Saturday; stablemate My Prospero is also a potential rival, while Aidan O'Brien has High Definition and Stone Age entered

Baaeed will face a maximum of nine rivals when he bids to crown an unbeaten career with victory in the Qipco Champion Stakes at Ascot on Saturday.

The William Haggas-trained four-year-old stretched his winning run to double figures when successfully stepping up to a mile and a quarter in the Juddmonte International at York in August - his sixth consecutive victory at Group One level.

A step up to a mile and a half for the Prix de l'Arc de Triomphe was briefly considered, but connections ultimately decided to stick at 10 furlongs for what will be his swansong before being retired to stud.

Jim Crowley has steered Baaeed to each of his top-level wins and is looking forward to being on board for the final time this weekend following a pleasing Monday morning workout.

"I wasn't on him this morning - I only get the keys on raceday - but I believe he went very well," the jockey told Sky Sports Racing.

"It's a proper race. Adayar is a Derby and King George winner and we probably haven't seen the best of Bay Bridge. The others probably have a lot to do. 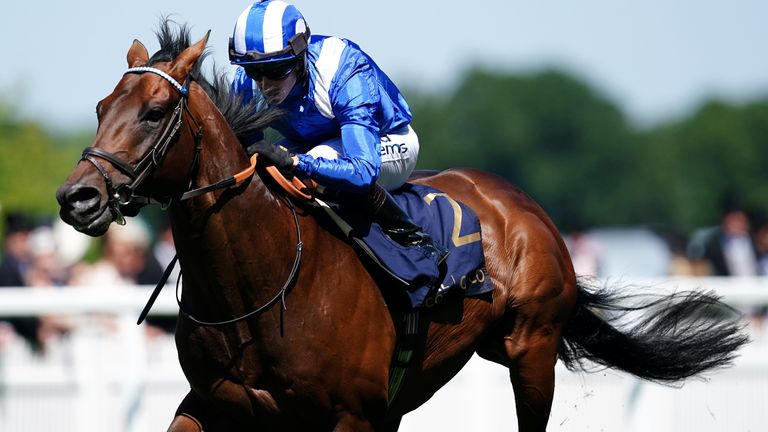 Jockey Jim Crowley has the latest on Baaeed ahead of his final run in the Champion Stakes at Ascot on Saturday.

"I'm looking forward to it. Hopefully we have a nice, dry week - not too much rain.

"I knew going up to a mile and a quarter would see the best of him and he put the race to bed very quickly at York. "He's had an easy run all year really - he hasn't really had to have a tough race. I'm sure I'll have a tougher one on Saturday."

Haggas has also confirmed Dubai Honour, who was fourth behind his illustrious stablemate at York, as well as My Prospero, who claimed a third win from five starts in a Group Two in France last time out.

The biggest threat to Baaeed appears to be last year's Derby and King George hero Adayar, who steps back up in class after slamming two inferior rivals on his belated reappearance at Doncaster.

Aidan O'Brien could call upon High Definition and Stone Age, while Noel Meade's Helvic Dream and the Jim Bolger-trained Mac Swiney could also travel from Ireland.