Carrie Roberts: The British Army player on the march with England Women

Carrie Roberts, who serves as a sergeant in the Army, is back in the England set-up nearly six years after making her debut and will be playing for St Helens when the 2021 Women's Super League gets under way

Carrie Roberts can barely remember a time where she was not involved in some sort of ball sport.

Given she lived in the rugby league hotbed of St Helens from the age of 10 and is now part of the England Women's set-up, though, it might come as a surprise that the oval-ball game was not necessarily one which held sway.

It was not until the age of 19 Roberts played organised rugby - and even then it was rugby union, having taken it up after joining the Army and later going on to represent them all over the world prior to making the switch to league.

"There was a running joke in my family that I would constantly come back with a different ball wherever I'd been," Roberts said of her childhood. "A bouncy ball, a rugby ball - I always had a ball."

"It wasn't really rugby which interested me, it was just being out with the boys and playing any sort of ball sport.

"Then when I joined the Army, it was that ethos of the Army Rugby Union team which really made me think 'I'm going to put a bit of effort into this because I really am enjoying it'."

The military training instructor in the Royal Electrical & Mechanical Engineers made rapid progress in the 15-man code, earning a place in Bristol's Premier 15s squad after impressing for the second team and then joining Saracens when work took her closer to London.

An invitation to play for the Army soon followed, taking Roberts as far afield as the USA, Australia and Fiji on tours, then taking the opportunity to cross codes when the rugby league team came calling.

The three-quarter made the transition seamlessly, earning a place in the England team for both internationals against France in 2015 and being named player of the match in the 14-14 draw after scoring two tries.

A new posting in the south of the country and then deployment to Afghanistan interrupted her rugby career, but she caught the eye of current national team head coach Craig Richards with her outstanding display as the British Army beat York City Knights to lift the Challenge Shield in 2019.

"You're always looking for players who can add to the squad, and first and foremost it was the stature of Carrie on an edge," Richards said.

England Women's head coach Craig Richards on his hopes of playing a mid-season Test and his aims for the Rugby League World Cup.

"One of the things I wanted when I first took over the side was, I thought our outside backs needed to be bigger if we were going to compete at international level.

"On the back of that, it was her aggression. There was some rawness in what she did, but she was really aggressive on the edge.

"She ran in two tries, but it wasn't so much she scored them, it was her aggression and the will to get on the end of it. There were also a couple of really aggressive tackles where it was raw but of international standard."

That 40-4 victory over York at the Mend-A-Hose Jungle marked the first time any British Army team - men's or women's - had claimed a national honour in rugby league and came on the back of a gruelling semi-final against Featherstone Rovers which the forces side clinched in extra-time. 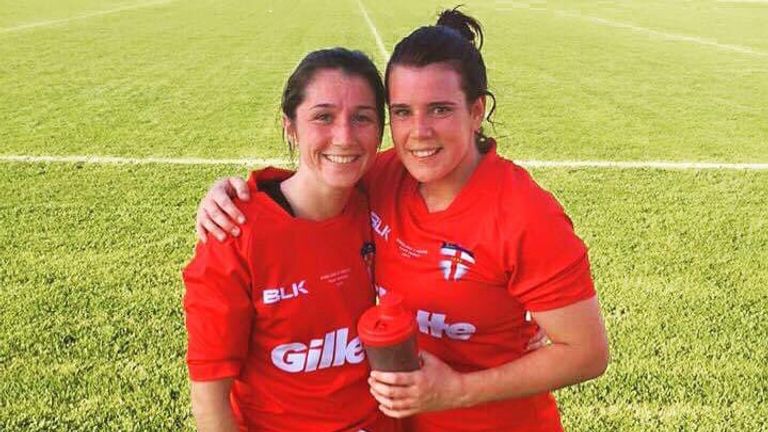 There was a running joke in my family that I would constantly come back with a different ball wherever I'd been.

That success did much to raise the profile of the sport within the Army and Roberts was delighted her own display led to her being recalled to the England squad nearly six years after making her debut.

"It was a massive occasion because we were competing for the Challenge Shield - even more so for us because the British Army had never won any sort of silverware," Roberts said.

"For us, we were all geared up in the changing rooms and we couldn't wait to get out there to smash it.

"We had the confidence because we did well in the semi-finals, but I just played out of my skin for the girls and to represent the country. I felt I had a good game and I'm glad I got selected for that."

Roberts has been granted a place on the Army's elite sport programme which means she can dedicate herself full-time to her England ambitions in the build-up to this year's Rugby League World Cup on home soil.

That has allowed her to join hometown club St Helens for the 2021 Women's Super League season, which has a provisional start date of mid-April, and she cannot wait to have something to look forward to other than training after the Covid-19 pandemic led to last year's women's competitions being cancelled.

"There are only so many cones you can run to," Roberts said. "I can't wait to get involved with the Super League team.

"Just to pull that St Helens top on is going to be amazing. All of my friends and family are from St Helens now, so it will be amazing to get all of them to come down and watch, pull that shirt on and do the team proud.

"It's something I've really been looking forward to during this lockdown and, fingers crossed, I'll get a starting shirt."