Willie Isa is excited to see Wigan Warriors' youngsters making their mark for the club in Super League, even if it means he is having to get used to playing at centre on a more regular basis rather than his preferred second-row position.

Injuries to others in the squad have meant Isa has spent the 2021 campaign playing in the three-quarters - something his back-row partner Liam Farrell has had to do at times too - with the Warriors' young guns being given an opportunity to feature elsewhere in the team.

The emergence of Kai Pearce-Paul this season means the Auckland-born forward might be set for an even longer spell there, but Isa is happy to embrace whatever role head coach Adrian Lam asks him to play and is equally pleased to see Wigan's next generation seizing their chance.

"I've always been like that since I've been at the club," Isa said. "I've been playing back row the last couple of years and centre all this year, really - I haven't even seen the back row now and probably won't because Kai Pearce-Paul is killing it!

"But fair play to him and I love it. That's what's brilliant about this sport, there is always someone going to take your spot or they're always challenging for spots.

"We've got Liam Farrell, Mr Consistent, on the other side so it's a great back row and we're just waiting for John Bateman to get his boots back on again.

"But it's important to embrace each role as it comes and we've got the mentality at this club wherever you play you've got to do your job, and I'm doing the best I can in this job." 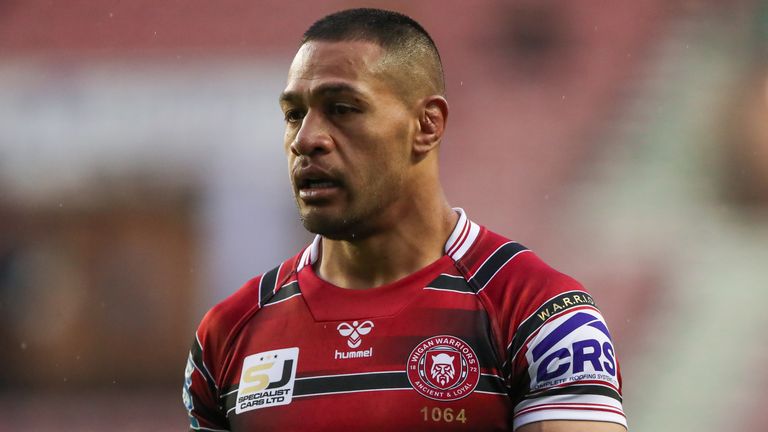 It's important to embrace each role as it comes and we've got the mentality at this club wherever you play you've got to do your job, and I'm doing the best I can in this job.

Isa is now regarded as one of the senior players in the Wigan squad, and not just because he turned 32 in January. Indeed, his experience in both the NRL and Super League from a 13-year-and-counting career is the biggest part of him attaining that tag.

The one-time Samoa international sees it as a responsibility to pass on the knowledge he has gleaned from his time at rugby league's highest levels to the likes of Pearce-Paul, knowing they will one day be doing the same for their up-and-coming team-mates.

It is not so much playing advice he gives though, more what it takes to make it and perform consistently at the highest levels, as well as maximise their individual attributes.

"People think when you pass on advice, you're trying to change peoples' games, but you've got to embrace what Kai brings to the team and try to adapt to what their biggest characteristics and strengths are," Isa said.

"Sometimes you've got to step back a bit and let them flourish, but at the same time there are principles at this club you've got to abide by, and they understand that.

"It's just the experiences of where they've never been and it's an everyday thing with me, the mentality of trying to work hard and get everything out whether it's a stretch class, a recovery session or a little skill block. It's different understanding to actually doing it, but they're young guys and you've got to be patient.

"But it's exciting and these guys are getting opportunities, and if you look at other clubs, I don't think they'd play all these young lads at one time. We embrace it and we love it - that's what this club is about, bringing through the youth from our system and putting them in at the deep end, which has been brilliant."

A 25-12 win over Wakefield Trinity last Friday, inspired by another player in an unfamiliar role in Jackson Hastings at full-back, means the Warriors are currently on a run of three games unbeaten and the run of five straight defeats which preceded it becoming a fading memory. 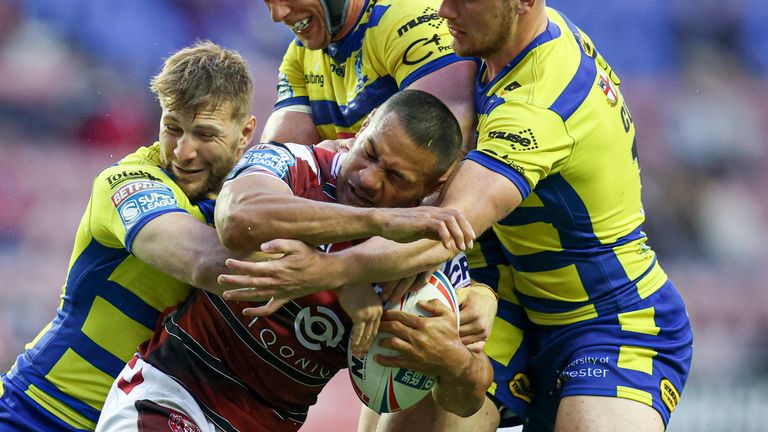 We've always had great games against Warrington since I've been at Wigan and the stand-out ones would be 2016 and 2018 Grand Finals.

Last year's League Leaders' Shield winners face the toughest test of that revival so far on Wednesday evening when they face fellow play-off contenders and old rivals Warrington Wolves - a team they suffered a 40-14 defeat to just under a month ago - at the Halliwell Jones Stadium, live on Sky Sports.

Isa, who spent four seasons with another of Warrington's rivals Widnes Vikings prior to joining Wigan in 2016, is relishing this contest and the memories of two recent Super League Grand Final wins over the Wolves are spurring him on.

"I'm always keen to play against teams like Warrington," Isa said. "We've always had great games against Warrington since I've been at Wigan and the stand-out ones would be 2016 and 2018 Grand Finals.

"We've always had tight battles and especially through the middle it's always close games. They play very expansive rugby league which is great on the eye and great for the fans to watch.

"But we're trying to build as best we can, and we're excited for the challenge. We never back down and we're always keen for a good rugby league game."