Head coach Woolf, who guided St Helens to the 2020 title as well, was full of praise for the efforts of his team. "It's a very deserved win from a group of blokes who haven't just worked hard this year, but worked hard for three years," he said

A sequence which began under head coach Woolf's predecessor Justin Holbrook and continued in the 46-year-old's first season in charge last year has carried on into 2021 courtesy of Saturday's 12-10 victory over Catalans Dragons.

It meant Saints matched the achievement of Leeds Rhinos' golden generation in the mid-to-late 2000s, becoming only the second team in Super League history to win the showpiece game three years running as Woolf's side held out late on to deny Catalans a maiden title.

Naiqama stars as Saints make it three in row

"I thought our defence to win that game in the last 10 minutes with all that fatigue and three sets on our line, I think we're the only team in the competition which can do that," Woolf said.

"It's a very deserved win from a group of blokes who haven't just worked hard this year, but worked hard for three years to put themselves in this position.

"It doesn't get done that often for a reason - because it's very hard to do."

Two tries either side of half-time from Kevin Naiqama, who now returns to his home in Australia and is set to call time on his playing career, set St Helens on course for victory over the League Leaders' Shield winners. 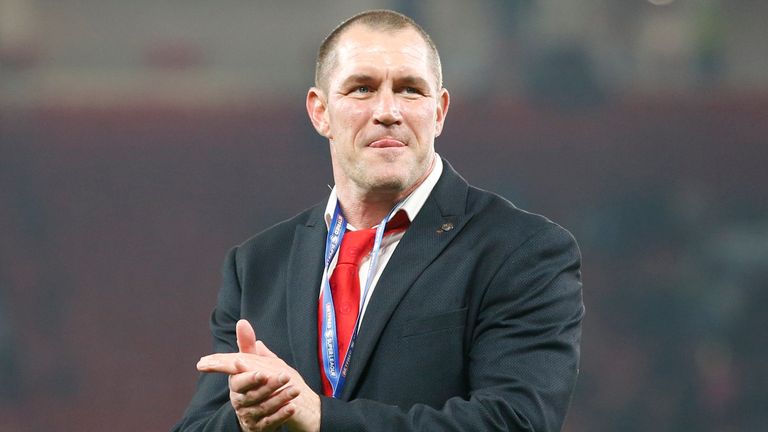 It's a very deserved win from a group of blokes who haven't just worked hard this year, but worked hard for three years to put themselves in this position.

Naiqama capped a memorable night by receiving the Harry Sunderland Trophy for being voted player of the match at Old Trafford and although the Fiji international was grateful to be honoured with that accolade, his main concern was making sure the team got the desired result.

"You couldn't write a better fairy-tale ending, but all I wanted to do was win," Naiqama said. "The man of the match, that's irrelevant to me.

"All I wanted to do was do my job and do what I can to help get that win. That's just a bonus that came with it.

"I'm just glad the players all bought into what we're trying to do and at the end of the day we got the result.

"Like Woolfy said, that's something which has been building for three years and I'm just so glad what we've achieved. The enormity of it is going to be hard to process because it's so hard to put into words."

The victory ensured St Helens completed the Super League and Challenge Cup double for the first time since 2006 too, as well as being the first team to hold both major honours since old rivals Wigan Warriors in 2013.

Nevertheless, Woolf believes there is still more to come from his side as they aim to extend their stranglehold on Super League when the 2022 season gets underway - after celebrating this success, of course.

"With different players coming in different positions, there are going to be different things we can work on and different strengths, so we'll be a slightly different team next season.

"It's really important we enjoy a special group of men who have achieved something really special and deserve a lot of acknowledgement. St Helens should be really proud of the group which represent them."