Head coach Hardman hailed the efforts of his Saints team over the past two years as they completed the treble. "We knew we would be ready for 2021 because we'd be back even better and I'm really proud of the girls," he said

By Marc Bazeley at Emerald Headingley

Derek Hardman believes the genesis of St Helens' treble-winning season was laid at the start of the cancelled 2020 campaign after they capped a memorable year by sealing Women's Super League Grand Final glory.

Having emerged from the 2019 season as beaten semi-finalist in both the Super League play-offs and Challenge Cup, head coach Hardman felt Saints were well-placed to go on and claim honours last year before the Covid-19 pandemic forced the cancellation of the entire season.

But there was no let-up from his side when the 2021 campaign got underway, claiming both the Challenge Cup and League Leaders' Shield before a historic year was capped with a 28-0 win over reigning champions Leeds Rhinos in Sunday's Grand Final on the back of two tries from Leah Burke.

"It's absolutely amazing," Hardman said. "We set our stall out from 2020 and we were ready then. We knew we would be ready for 2021 because we'd be back even better and I'm really proud of the girls.

"I thought Leeds defend very well for the first 20, it was really close and it could go either way, but we knew if we stayed in the arm-wrestle our fitness would tell.

"Then the little kicks from Zoe Harris for Leah to score, it took that to break their defence down so I think that's testament to Leeds' defence." 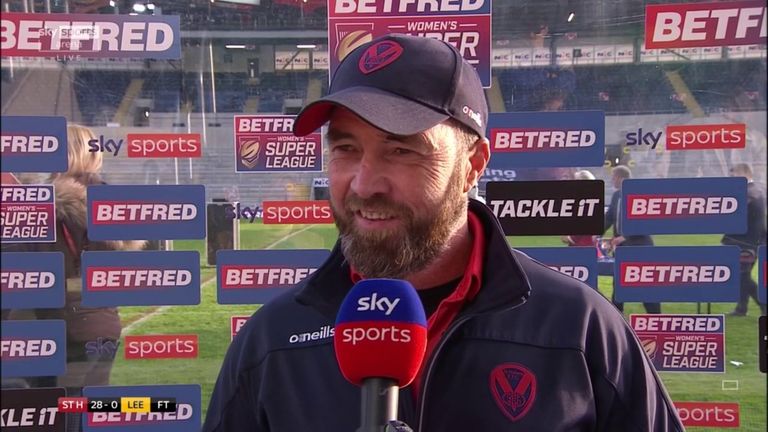 Winger Burke and half-back Harris, who grabbed a try to go with her two assists, may have grabbed the headlines, but much of the foundation work for Saints' victory in front of over 4,000 fans at Emerald Headingley was done by player of the match Chantelle Crowl.

The prop helped her side gain a foothold with some strong running and offloading, particularly in the first half, and while Crowl felt her team-mates deserved just as much praise she was nonetheless delighted to be honoured in such a way.

"I feel so lucky to get it because everybody on that pitch deserved it, not just me," Crowl said. "This is for me and the girls; we've all worked for each other, but it's a good feeling - I'm not going to lie! 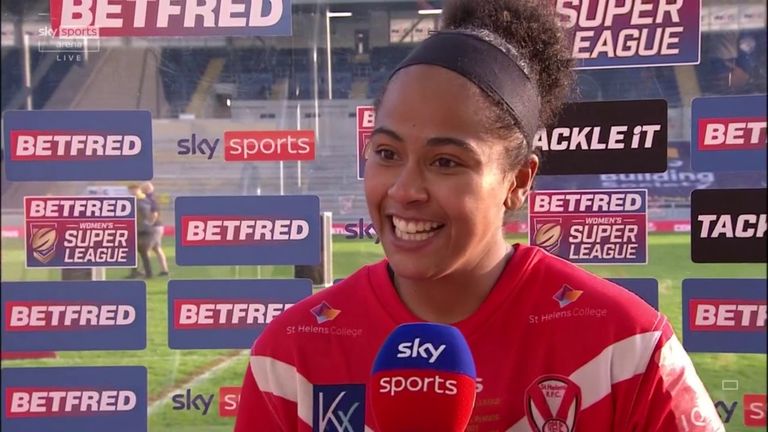 "Before a game, the way I think about how I'm going to play, my offloads, how fast I'm going to run and my power, but when I speak to my captain it's about getting the right offloads and not doing it at the wrong time.

"I think it paid off today, we did it at the right time and didn't make too many errors off it."

As well as suffering a defeat in the final on their home turf, Leeds saw Sophie Nuttall stretchered off towards the end of the first half due to concerns over a possible neck injury sustained while making a tackle.

Rhinos Women's captain @CorkaHill said she was proud of her team mates and predicts a bright future for the team.

However, Rhinos head coach Lois Forsell has her fingers crossed Nuttall being taken to hospital was just precautionary and reported the winger was in good spirits when she spoke to her at half-time in the changing room.

As for the match itself, the first-year Leeds boss was proud of her squad's efforts, but was left to rue chances they were unable to make the most of before St Helens pulled away in the second half.

"That's why it's so disappointing," Forsell said. "They started off how we asked them to and for the first 20 minutes we gave a good account of ourselves, but then missed opportunities on the back of that.

"We gave ourselves too much to do, but also didn't start the second half as well as Saints did. We showed some real grit and determination in the last five minutes of the game, but that's not what you do in a Grand Final - you to do it for the full 80."