Tex Hoy: New Hull FC signing takes step out of his comfort zone with move from NRL to Super League

Tex Hoy will have a couple of familiar faces to help him settle into life in Kingston Upon Hull when he swaps the NRL for the Betfred Super League at the end of the year. Unfortunately, though, they will both moving to his new club's bitter cross-city rivals.

The 22-year-old has agreed a two-year deal with an option for a third with Hull FC as he seeks regular playing opportunities and the chance to sample a new life away from his home city club Newcastle Knights.

Also making the move to these shores with him are team-mate Sauaso 'Jesse' Sue and Knights assistant Willie Peters, albeit with Hull Kingston Rovers. The former will be adding presence to the pack, while the latter is Tony Smith's permanent successor as head coach in the east of the city.

It is already adding extra spice to what Hoy is well aware is the fierce, burning rivalry between the two Hull clubs.

"When the first article came about a potential move, Willie called me and I think the first thing he said was 'are you going to be my enemy?'," Hoy said.

"Jesse Sue is another one, he's saying 'are you going to be my neighbour?', so it's obviously going to help me having people over there I know. 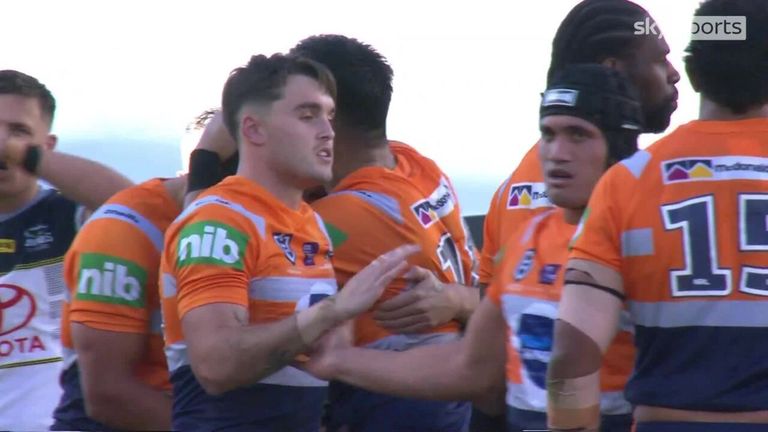 "They're the enemy team, but outside of football they're still my mates and it will still be good to have people over there I know."

Although he is moving from one costal city to another, it will still be something of a change of pace for Hoy. For starters, the East Yorkshire coast is hardly noted as a surfing location like back home where his father Matt honed the skills which helped him become the No 5-ranked surfer in the world during his own sporting career.

It is not just the presence of Peters and Sue which will should help ease him into his new surroundings though, but also the fact that, like Newcastle, rugby league is deeply ingrained in the culture of the city.

"They stick with you through thick and thin; a couple of years ago the Knights got a couple of wooden spoons and they were probably still getting in the top five crowds in the NRL.

"I think they're the best fans in the NRL; they always show up, they always support you, and they're big critics because they love their team and their town. When you're hearing Newcastle chants it's probably one of the most motivating things and gives you your second wind pretty quickly.

"I've heard that's pretty similar to Hull as well with the loud roars and how passionate they are for their team, and I get a similar feeling to what it is back in Newcastle."

Being the son of a high-profile athlete was not Hoy's only brush with Novocastrian sporting royalty when he was growing up though, with two of the city's - and, indeed, Australia's - rugby league icons being friends of the family.

Hoy's mother is close friends with the wife of Matty Johns, who he would spend summer holidays practising with. By extension, he got to know Matty's brother and one of Australia's rugby league Immortals, Andrew Johns - who was also friends with dad and is now a specialist coaching consultant with the Knights.

"He might give you tips like 'this is how you kick a footy like this' and 'if you want the ball to curve that way you kick it like this'," Hoy said of learning from Matty.

"It's the same with Andrew; he's an Immortal known for his kicking and being able to kick a ball however he wants it.

"He's part of the club now at Newcastle, he's always had pointers and he's just a good coach in general - one of the smartest footy heads I know. You just sit there and pick his brains and when he speaks you just listen because you know he's going to give you the best advice possible.

"My younger years, they were just there to teach me little things and now I've gone into top grade at Newcastle, Joey [Andrew Johns] tries to take your footy to the next step."

Hoy, capable of playing at either full-back or in the halves, will remain with Newcastle until the end of the current NRL season, but is already relishing the next chapter of his life in Hull where he follows Castleford Tigers half-back Jake Trueman in signing for the Black and Whites for 2023.

The advice of another Knights coach in ex-Hull FC prop Mark O'Meley helped in his decision to move to the MKM Stadium too and it is not just on the playing side where Hoy is hoping to benefit.

"You get to an age where you just know everything around your town and not a lot of pressure is being put on you," Hoy said.

"Stuff like that made my decision to get out of my comfort zone and just start a new chapter and learn new things without having my friends and family a stone's throw away from me.

"I'm just looking to grow up as a human and to come and play consistent footy every week at a high level."