Ryan Hall will undergo a scan after sustaining a knee injury during Leeds' 48-22 win over Toulouse in their Super 8s Qualifiers opener at Emerald Headingley Stadium.

The England winger, who has agreed a move to Sydney Roosters at the end of the season, was forced off early in the second half after appearing to twist his knee.

Hall, 30, scored one of the Rhinos' nine tries and Leeds' director of rugby Kevin Sinfield is now waiting to discover the severity of the problem.

"It's probably too early to say because he is walking around in there and he does tend to recover very quickly from what could be deemed to be really serious injuries," said Sinfield after the match.

"He's smiling, but we will get him scanned on Monday morning. At this stage, I would say he's a doubt for next week's trip to London Broncos."

Former Warrington hooker Brad Dwyer opened the scoring early on and Australian centre Joel Moon claimed a first-half brace, while Hall was also on target. Yet the French visitors claimed three first-half tries to make it 20-16 at the break.

The first try of the second period crucially went to Leeds as they turned up the heat and powered to victory.

Shaun Edwards says there are"high-profile" rugby union players who have expressed an interest in switching codes.

"I'm pleased with the win - I thought we played some really good stuff in patches," added Sinfield.

"We need to get those patches for longer periods but I thought Toulouse had a real go. They came back at us at the end of the first half and the opportunism and offload with which they played caused us some problems.

"Thankfully we were able to stick in there, especially at the start of the second half. It was a real challenge for our guys but we came through it. It's nice to start this campaign off with a win and on the right foot." 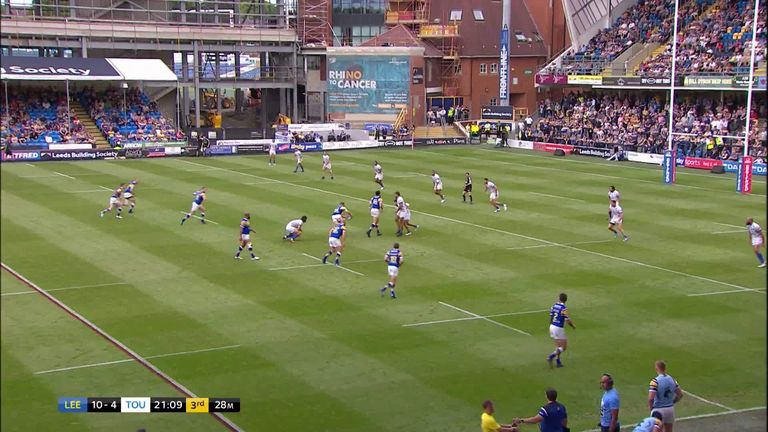 Watch highlights of the match at Emerald Headingley Stadium

Toulouse coach Sylvain Houles was left frustrated with his side's defensive display, although he took heart from their attacking prowess which also brought a late fourth try from Chris Centrone.

Houles, who lost former Wigan prop Eddy Pettybourne to injury early in the second half, said: "I thought our defence let us down.

"We did come back in the first half and showed some character to do that, but Leeds got us around the ruck and we didn't manage to control them.

"That showed us what the next level is for us and it's an area for improvement. Attacking-wise, we asked them a lot of questions and we will learn from the whole experience and take confidence from it."