Second-row Shane Wright had little hesitation in switching to Salford from NRL side North Queensland Cowboys when the offer of a two-year contract came up; "I'm excited for the opportunity and willing just to jump in, have a crack and see what happens"

Shane Wright is already finding plenty of similarities between Townsville and Salford since swapping the NRL for Super League, even if the weather is not one of them.

Had he still been with North Queensland Cowboys, the second row would be preparing for the 2022 campaign in relatively balmy conditions in north-eastern Australia, rather than the depths of winter in the north-west of England with Salford Red Devils.

But the cities themselves both have a strong history of rugby league with professional clubs backed by a fervent fanbase, something which helped Wright decide to move around the world to pursue his ambitions in the sport.

"It's a massive move because I'm coming across the other side of the world, but the things which were most in my mind were the climate and the weather," Wright said. "Playing in Townsville, I come from a place where in the winter it doesn't go below 20 degrees.

"But I always thought at some time in my rugby league career I'd want to come over and play in Super League, so I'm excited for the opportunity and willing just to jump in, have a crack and see what happens.

"Townsville is a small place, but there is still a strong backing for rugby league and the club in general.

"I can see some similarities here. Obviously with the two big soccer teams in Manchester United and Manchester City, we might lose some fans to them, but I've heard good things about how the crowd really gets behind the team here." 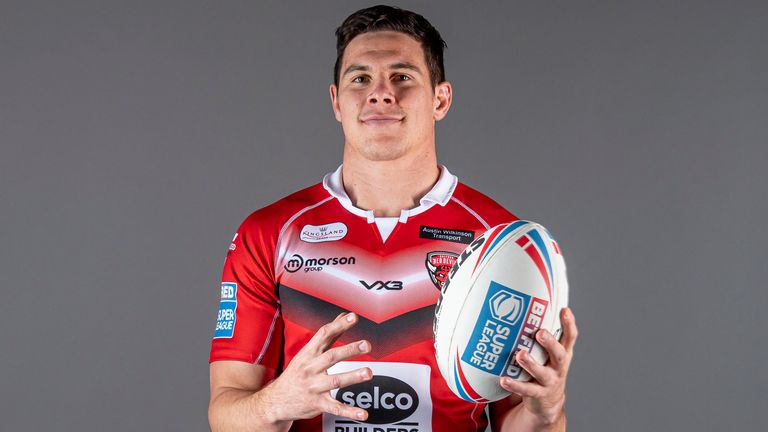 I want to come over and do my best, and hopefully that resonates and contributes to the team doing well as well.

Wright had initially been planning to seek further opportunities in the NRL, but Salford were one of the first clubs to approach him and that early interest stayed in the 25-year-old's mind when it came to making his mind up and signing a two-year contract.

He took advice from former Red Devils three-quarter Mark Henry, now on the strength and conditioning staff with the Cowboys, and good friend and former Leigh Centurions forward Lachlan Burr before opting to make the move to Super League too.

St Helens head coach Kristian Woolf, formerly a coach at the Cowboys, and ex-North Queensland full-back Lachlan Coote - now at Hull Kingston Rovers - also both offered Wright glowing assessments and he is now eager to make his mark as the Red Devils aim to rebound from a tough 2021 which saw them finish 11th.

"They said it was a very passionate club, and I come from a club and an area where people are passionate about [rugby league]," Wright said.

"That was one of the main things as well. The club have done well a couple of years back and last year they had a bit of a tough year, but so did I, I guess, so I'm just hungry to try to contribute and get this club back to where it belongs.

"They all said it takes maybe a little while to adjust, but it was some of their best days of rugby league, so everybody had good things to say about Super League."

Wright has quickly settled into his new life in the UK, aided by living with fellow Red Devils forward Sam Luckley and being given a good welcome by his new team-mates.

It is not just a new start for him, but also the club he has joined as the Paul Rowley era gets underway and Wright has noticed the intensity at training, with the hope he can be part of a Salford team which reaches a major final after the fairytale runs to Old Trafford in 2019 and Wembley in 2020.

Ryan Brierley on being back working with Paul Rowley at Salford and how he has embraced a positional move to full-back.

"In Australia, it can be very intense at times, but I feel as if it's just as intense here at the moment," Wright said.

"The boys are really ripping in and wanting to improve from last year, so training has been pretty full on, but you can see the club is in a good place at the moment.

"Just as a personal goal, I want to come over and do my best, and hopefully that resonates and contributes to the team doing well as well.

"If I get my game right, I can contribute to the team doing better. But I'm here to keep improving my game and getting the club back to where it belongs."