Team of the week: The top performers from the Challenge Cup final, Super League and the NRL

Castleford Tigers and St Helens all have representatives in our team following the Challenge Cup final, as well as stand-out players from Super League, the NRL and the 1895 Cup final

We put together a XIII of stand-out players from the Challenge Cup and 1895 Cup finals, along with the weekend's Super League and NRL matches...

This year's Challenge Cup final proved to be a bittersweet one for Evalds, who was named Lance Todd Trophy winner but finished on the losing team.

A slick move between him and Peter Mata'utia led to the full-back opening the scoring for Castleford with a try, while he constantly asked questions of their opponents with his running game.

Castleford's Niall Evalds on being awarded the Lance Todd Trophy and moving on from their Challenge Cup final defeat.

The winger gobbled up the metres for Salford as they chalked up another win in Super League by defeating Wakefield Trinity 24-14 on Friday evening.

Sio carried for 192 metres with an average gain of 10 metres per carry, busting five tackles and making one clean break while also scoring a try.

Inu bagged two tries for the Red Devils as they secured victory over Wakefield in a home match which was moved to the Halliwell Jones Stadium due to pitch maintenance taking place at the AJ Bell Stadium.

The centre provided an assist for a try too, made five tackle breaks and one clean break, along with carrying for 90 metres with an average gain of 10 metres per carry. Two tries from the Papua New Guinea international helped the reigning NRL champions make it 14 wins in a row as they overcame Newcastle Knights 48-4.

Olam came up with an assist too, along with carrying for 197 metres and 60 post-contact metres, plus breaking the line three times.

Two tries from Ikuvalu helped put the Roosters on course for a 34-18 win away to North Queensland Cowboys in Saturday's NRL encounter.

Along with crossing twice, Ikuvalu covered 217 metres and 97 post-contact metres with the ball in hand, as well as breaking the line three times.

The 18-year-old son of Leon Pryce showed another glimpse of his undoubted potential with a player-of-the-match display in Huddersfield's 14-12 defeat to Wigan in Super League.

Pryce scored his first professional try, carry for 109 metres with an average gain of nine metres which came on the back of him making nine tackle breaks and one clean break.

The 22-year-old was given the job of filling in for stand-out half-back James Maloney due to the Australian being suspended and produced a strong showing in the win over Leeds Rhinos.

Mourgue scored a try and set one up in the 27-18 win, as well as carrying for 56 metres, breaking six tackles and kicking five goals for the Super League leaders. 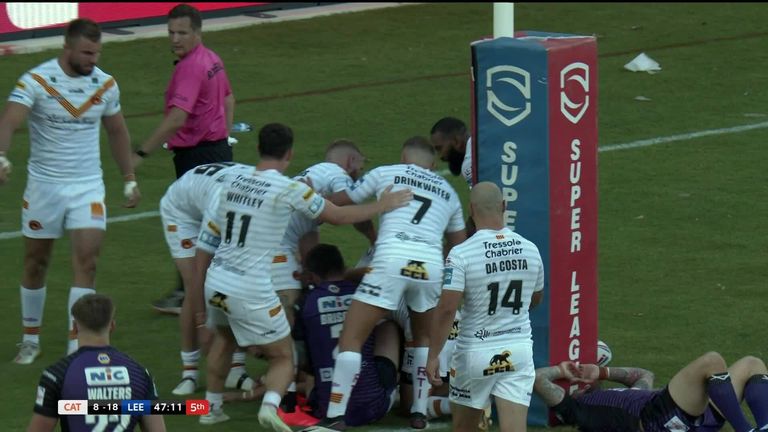 Playing off the interchange bench, prop Kasiano made a big impact for the Dragons as they maintained their impressive form at home to Leeds on Friday evening.

The New Zealand-born 30-year-old was one of five try-scorers for Catalans, with his score coming on the back of making 124 metres with an average gain of 12 metres per carry, six tackle breaks and two clean breaks.

The St Helens captain led from the front in the Challenge Cup final with another 80-minute spell at hooker, helping his side clinch the trophy for the first time since 2008.

Roby's try early in the second half helped get Saints back on level terms after they trailed 12-6 at the break and was at the forefront to claim his fourth winners' medal in the competition.

Another player who made a big impact off the interchange bench, Havard gave Wigan plenty of go-forward as they edged out Huddersfield in Friday's Super League encounter.

He carried for 124 metres per carry with an average gain of nine metres per carry, along with breaking out of one tackle. The 20-year-old also put in a big defensive shift with 37 tackles.

Rovers captain Lockwood became the first from the club to lift a trophy at Wembley since 1983 as they overcame York City Knights 41-34 in a thrilling 1895 Cup final on Saturday, putting in a strong performance for his club in the process.

That only tells part of the story for the second row though, who had dashed back to Yorkshire soon after arriving in London the previous day having been told his wife had gone into labour, only for him to link up with the team again at 8.30am on the day of the match after it proved to be a false alarm.

A try from the second row helped put the seal on Wigan's win at home to Huddersfield, capping another strong performance in the pack for the Warriors.

As well as his score, Farrell covered 175 metres with the ball in hand and bust three tackles, as well as coming up with 43 tackles on the defensive side.

The utility forward was at his rampaging best on a hot day at Wembley Stadium in the Cup final, keeping Castleford's defence on their toes.

Paasi made some big carries with the ball in hand, particularly in the second half which helped St Helens gain a foothold in a match they went on to win.