Wigan 16-6 Salford: Warriors make it four wins out of five in Super League 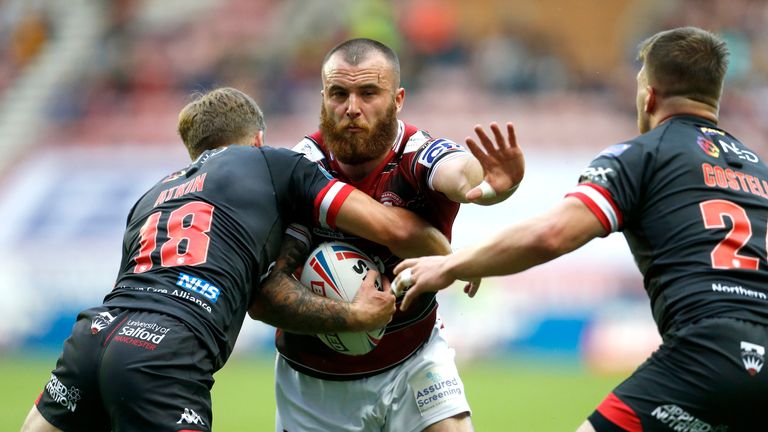 Wigan made it four wins from their last five Betfred Super League matches as they got the better of a spirited Salford 16-6 in a tough, yet scrappy encounter.

In a low-scoring first half, both teams scored a try apiece as Salford went in leading 6-4 at the break, but it could have been very different.

Wigan dominated the opening 20 minutes and could have been three scores up, but they led 4-0 with Sam Halsall grabbing his second try for the club with the opener.

That score affected Wigan more than Salford, and the Red Devils came fighting back with Joe Burgess scoring against his former club. Morgan Smithies and Josh Johnson were sent to the sin bin for fighting, before Harvey Livett kicked Salford ahead on the hooter with a penalty.

Wigan were the better team in the second period and dominated possession, but their inability to turn possession into points will start to concern coach Adrian Lam.

Wigan were the better side in the opening 15 minutes and could have been more than four points in front. Halsall, Ethan Havard and Liam Marshall all went close before they posted their first points.

Jackson Hastings was once again controlling matters and it was his cutout ball that almost saw Marshall score the opener but he was held short. Seconds later, Hastings combined on the right with Willie Isa, who then sent Halsall in for the opening try.

An error from Smith, as he kicked out on the full, saw the Red Devils get good field position and they took full advantage. Tui Lolohea took on the Wigan line, he then fed Livett who sent Burgess in to score against his former club. Livett failed to convert as the score was 4-4.

That try spurred the Red Devils and it was Wigan who now looked tired and devoid of any attacking ideas. Both teams were then reduced to 12 men as Smithies and Johnson were sin-binned after a little altercation.

This was definitely a half of two halves, Wigan could have been well in front, but they ended up going in trailing as Livett kicked a penalty late in the half.

Wigan looked a different side in attack in the second half with Hastings taking more control in the halves, and Smith was now finding holes in the Salford defence. Wigan then levelled matters with a Smith penalty following a high tackle.

Livett was then penalised with a high shot on Joe Bullock and Smith made sure the Warriors edged ahead with another two points.

It took until 15 minutes of the second half for Salford to launch a meaningful attack, and they almost scored as Danny Addy was held just short of the line on the last tackle.

The Warriors almost went the full length of the field, as Smithies made a break and Hastings then sent Jake Bibby clear. It looked like the ex-Salford man was going to score but he was halted by a Kevin Brown tackle and dropped the ball in the process.

Salford were finding it difficult to stop Hastings, but Ata Hingano found a way and unfortunately it was illegal as he took the Australian high and spent 10 minutes in the bin. Smith slotted over the penalty as Wigan now led 10-6.

Wigan finally broke Salford's spirit in the 68th minute when Powell crashed over from close range following a strong run from John Bateman. Smith converted and Wigan were out of sight at 16-6.