Two tries from Tom Briscoe, plus scores from Zane Tetevano, Cameron Smith, Rob Lui, Brad Dwyer, Ash Handley and Kruise Leeming secured the win for Leeds; Luke Gale was forced off in the first half with a knee injury 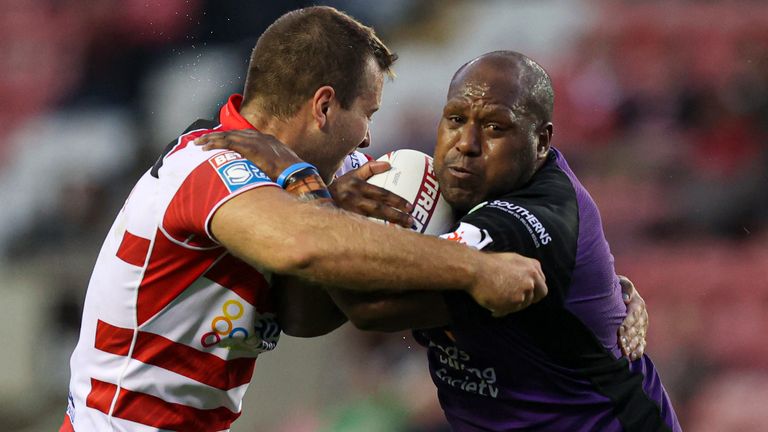 Leeds Rhinos revived their Super League play-off hopes with an eight-try victory over bottom-side Leigh Centurions, but it came at a cost as playmaker Luke Gale was forced off with a first-half knee injury.

The Rhinos had lost their previous two games, but they had too much class for a Centurions side who slumped to their 16th consecutive Super League defeat this season and remain relegation favourites.

The loss of Gale inside the opening quarter cast a shadow over the 46-10 victory as he joined a casualty list which already includes a number of key players.

The Rhinos overcome injuries to Gale and Hurrell to run out 46-10 winners at Leigh Centurions with some impressive performances by the younger members of the squad pic.twitter.com/hGaQXGaunI

The England scrum-half was hurt in a tackle and was forced off in clear discomfort before his left knee was put in a brace as he watched the rest of the game from the sidelines.

The result was nevertheless a boost to Leeds' hopes of a top-six finish and they claimed the opening try in the 10th minute.

Having won a set restart, some neat passing from the Rhinos culminated in Kruise Leeming cleverly delaying a pass which allowed Zane Tetevano to crash over the line from close range.

Rhyse Martin added the conversion to make it 6-0 but moments later Gale was forced off through injury and replaced by Brad Dwyer.

The switch saw Leeming move into the halves alongside Rob Lui but soon after the Rhinos thought they had claimed a second try as Lui's offload sent Martin over the line inside the right channel, but his pass was slightly forward and the score was chalked off.

Leigh second-rower Matty Foster was forced off for a head injury assessment and replaced by Matty Gee before Leeds scored a second try in the 20th minute. Harry Newman and Dwyer combined to send Tom Briscoe over in the right corner, but Martin could not convert, ending a run of 34 successful conversion attempts.

Spirited Leigh responded when Gee showed impressive strength to force his way over the line before a tackle by Tetevano on Matty Russell saw the Leigh winger forced off, with the incident placed on report by referee Robert Hicks.

Leeds led 10-6 at half-time but scored a fine third try in the 47th minute when Richie Myler's superb pass sent Briscoe diving over in the right corner for his second of the evening.

Martin converted and then added a penalty to make it 24-6 before Leigh claimed a second try when James Bell's pass sent Gee over again, although Craig Mullen's conversion rebounded off a post.

But Lui then scampered over from close range to score and Dwyer burst clear to cross before Handley touched down in the left corner and Leeming did likewise in the last minute, with Martin ending up with seven goals.