St Helens all but ended local rivals Warrington's hopes of a top-two finish in the Betfred Super League with an exciting 24-14 victory at the Halliwell Jones stadium.

The win for the champions means it is set to be a straight head-to-head between Kristian Woolf's side and leaders Catalans Dragons for the league leaders' shield with the top two clashing at Newcastle's St James' Park next weekend in the Magic Weekend.

Warrington replied with tries from Ben Currie and George Williams and three goals from Stefan Ratchford. 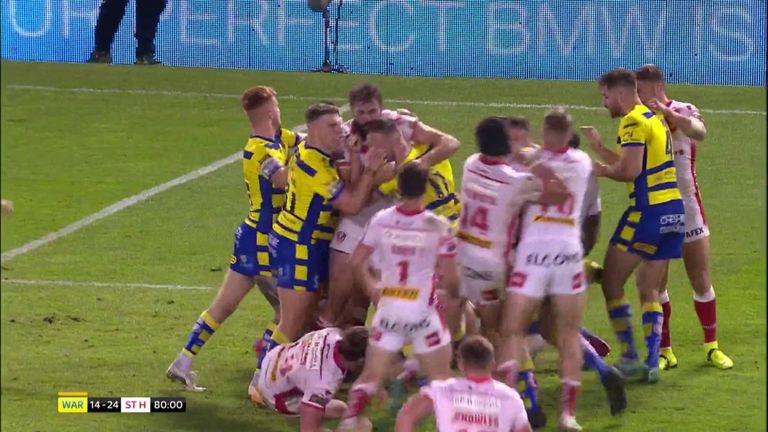 The Wolves were without prop Mike Cooper who sustained a leg injury in Thursday's win over Huddersfield so Joe Philbin took his place in the front row and Jason Clark returned to the starting line-up - after injury - at loose forward.

St Helens welcomed back Tommy Makinson and Bentley after suspension and Percival returned at centre after being rested in the win over Leigh which saw the champions lose key half-back Jonny Lomax with a hamstring problem, so the versatile Jack Welsby started at stand-off.

Saints started in impressive fashion and almost took the lead after just three minutes but Currie got to James Roby's kick over the line ahead of Coote after confirmation from the video referee.

The visitors continued to dominate the first half and two tries in four minutes gave the champions a lead their early pressure deserved.

Firstly, Welsby's great pass allowed Naiqama to touch down and then, four minutes later, Coote's break and pass gave the supporting Dodd a clear run to the line.

Coote was on target with one conversion to give Saints a 10-0 advantage midway through the first half.

The Wolves were making little impression on a fierce St Helens defensive effort in the opening half hour and - on the rare occasion they did come close to the line - they could find no way through some uncompromising tackling.

But despite being second best for most of the half, the home side turned the game on its head with two tries in the final eight minutes of the half.

Williams - on his home debut - was provider for Warrington's opening try after 32 minutes when his break allowed Currie to race clear and then Jake Mamo and Josh Thewlis combined down the right and the winger's kick ahead was gathered by the former Wigan man, who crashed over in the corner.

Ratchford was on target with both conversions and booted over a penalty after the half-time hooter had sounded to give Warrington an unlikely 14-10 advantage at the break.

The away side started the second half on the front foot again and after Currie had denied Naiqama with a try-saving tackle, they regained the lead when Joe Batchelor stole the ball from Mamo and handed it on to Percival, who raced 70 metres for a thrilling try which Coote converted.

It gave the champions the momentum back and Woolf's men made sure of victory when Bentley went over and Coote converted to stretch the lead to 22-14.

In a scrappy finish, Tom Lineham was sent to the sin bin for a high tackle on Coote with the full-back landing the resulting penalty.

In the dying seconds, Gareth Widdop and Bentley were also shown yellow cards after a skirmish.