Beauden Barrett: All Black hopes to claim No 10 jersey after Japan move

Despite taking a year out from Super Rugby, Beauden Barrett is eager to impress All Blacks head coach Ian Foster and claim the No 10 jersey, having featured heavily for New Zealand at full-back in recent years 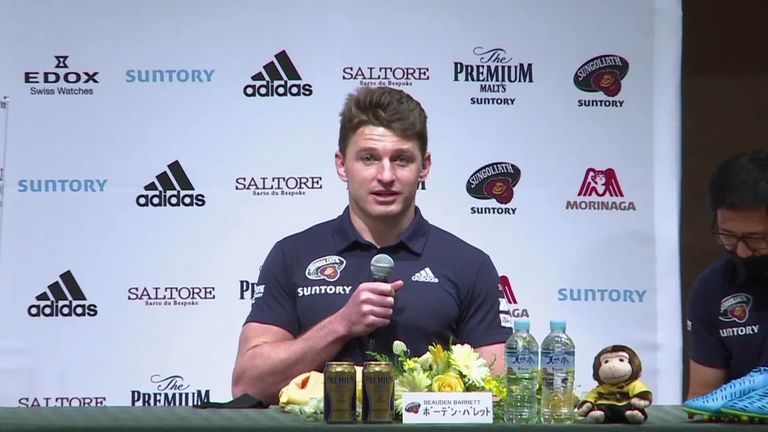 Beauden Barrett said he hopes to remain in contention for the New Zealand No 10 jersey by impressing in Japan's Top League, as he was unveiled as a Suntory Sungoliath player in Tokyo on Wednesday.

Part of Barrett's contract with New Zealand Rugby (NZR) allows him to play a sabbatical overseas, and the two-time World Rugby Player of the Year has joined Suntory for the 2021 Top League season, which begins next week.

Despite taking a year out from Super Rugby and the spotlight of playing at home, the 29-year-old is eager to impress All Blacks boss Ian Foster and claim the No 10 jersey, having featured heavily at full-back in recent years.

"I have got a little bit of work to do in terms of slotting back into that role (fly-half)," Barrett told reporters.

"I think one would expect me to play a little more at number 10 and that is certainly something I am aspiring to do back in New Zealand for the All Blacks."

Barrett is one of a number of high-profile foreign players who have joined Japanese clubs this season, including compatriots Kieran Read, TJ Perenara and Ben Smith.

Barrett could have chosen to play a season in France where, as a non-exempt foreign-based player, he would have ruled himself out for contention for the All Blacks. But he chose Japan in large part because that would allow him to better prepare for the 2023 Rugby World Cup.

"I am really happy about the decision that I made."

Top League, which was completely scrapped last year because of the coronavirus pandemic, is due to begin next weekend and Barrett says despite a rise in cases recently, he holds no regrets over the move.

Barrett said: "It's the world we live in at the moment, it is challenging, unpredictable, but as players and people, I think we have to remain optimistic and as positive as possible.

"So we also have to be good at adapting. If things change as players, we have to be ready for change. Yes, absolutely, I would still come."