Marcus Smith, who won the Premiership last season before receiving a Lions call-up, is expected to be Eddie Jones' No 10, with Owen Farrell poised to play at inside centre ahead of Tests against Tonga, Australia and South Africa in November

Captain Owen Farrell is ready to help shape Marcus Smith's development in the international ranks as England prepare for the Autumn Nations Series.

Smith, a Premiership title winner last season with Harlequins, is expected to be Eddie Jones' starting No 10 following the omission of George Ford for the Tests against Tonga, Australia and South Africa at Twickenham in November.

Farrell is in turn poised to play at inside centre and he has backed the 22-year-old to be a game-changer for England after his rapid rise in the game was highlighted by a call-up to the British and Irish Lions squad in the summer.

"Marcus is a massive talent and a very exciting player. He's someone who can unlock a game himself but he's also got a brilliant eye for how to make a team work as well," Farrell said.

"You want to make sure he keeps that sort of balance and he's got the attitude to do that - hopefully for a long time. 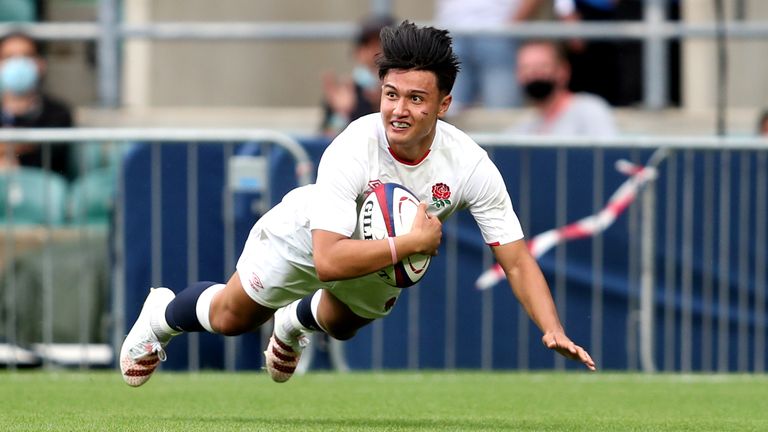 "He's a brilliant lad and he's not just a very talented player, but a proper student of the game"

"Marcus is someone who loves talking rugby. He loves chatting about the game and trying to understand the game a bit better. If I can help him do that in any way possible, I'd love to.

"We have worked together before and he has been in camps before when he was a bit younger.

"I shared a room with him in the past and it was good to get to know him a bit better over the summer with the Lions.

"He's a brilliant lad and he's not just a very talented player, but a proper student of the game.

"That sounds a bit cliche, but he is really bothered about getting better and understanding the game a bit more. He loves chatting about rugby, so that made it easy for me to get on with him!"

Former England international Mike Brown has suggested that there could be a power struggle between Smith and Farrell moving forward.

But as England continue their preparations for the 2023 World Cup in France, Farrell is adamant two-cap international Smith has the presence to be an on-field leader.

"Marcus seems like he's confident and that's because, for me, he's done the work. He understands the game and knows exactly what he wants to get out of it," Farrell said.

"He speaks sense and that helps your confidence and helps when it comes to playing in the position that he does. He is doing that really well at the minute."

Despite his standing as captain, Farrell, 30, is aware he needs to be at his best to avoid having his own international future cast into doubt.

"I've never thought no one was undroppable. You always have to work hard to be in this team, to play in these games. That's never going to be any different," he said.

"I don't expect anything from a squad announcement anyway. I don't expect anybody to be in. You're waiting for a phone call to see if you're picked yourself. You don't want to expect too much."