Autumn Nations Series: Johnny Sexton calls on Ireland to push on from win over New Zealand

Ireland captain Sexton wants the team to push on after toppling the All Blacks in Saturday's clash in Dublin. "There's a lot of room for improvement - we need to keep our feet on the ground and keep driving this," he said

Johnny Sexton has warned Ireland's thrilling 29-20 win over New Zealand cannot be the peak of the team's achievements.

A raucous Dublin crowd were treated to the best display of the Andy Farrell era as tries from native Kiwi James Lowe, Ronan Kelleher and Caelan Doris laid the foundations for Ireland's third victory over the All Blacks in the past five meetings, with Joey Carbery adding three crucial late penalties.

Ireland failed to build on those previous successes when it mattered, suffering a crushing Rugby World Cup quarter-final defeat at New Zealand's hands in 2019 and captain Sexton - who added five points with his boot on Saturday before being replaced by Carbery due to a twisted knee - wants the latest headline-grabbing triumph to be a springboard for the future.

"We've already identified that this is the start of a two-year journey and we've said that," Sexton said. "This is the start and it's important that we continually improve.

"Obviously, this being a peak is no good to anybody. There's a lot of room for improvement - we need to keep our feet on the ground and keep driving this. 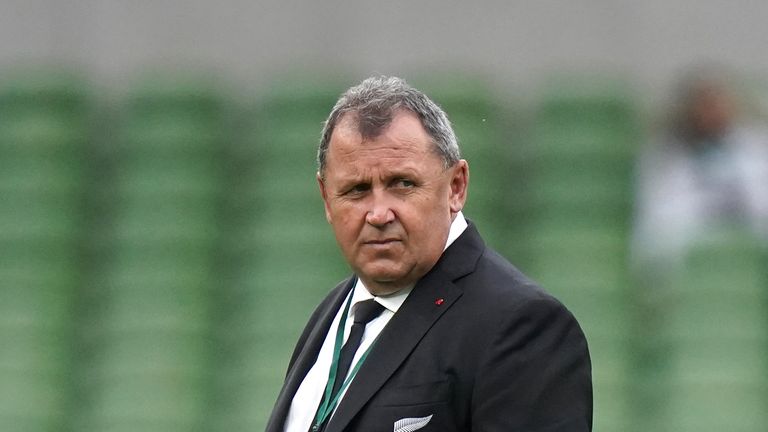 "There's a lot of young guys, very young, a lot younger than me, and they need to realise that this is still a start and we need to keep building.

"The great thing about beating New Zealand is that it gives a lift to the country but you don't win a trophy and you don't have something to show for it, as such. As happy as we are, we need to push on."

Ireland dominated from start to finish to beat New Zealand 29-20 at an electric Aviva Stadium on Saturday.

Ireland's preparations to face the three-time world champions included the disruption of undergoing additional PCR testing on Friday following a potential case of coronavirus for an unnamed player.

Farrell's men shrugged off the Covid episode and harnessed the spirit of Biden's letter as they flew out of the blocks in front of the stadium's first capacity crowd for a rugby match in almost two years.

But, following Lowe's early score, they somehow trailed 10-5 at the break after failing to capitalise on their superiority.

Obviously, this being a peak is no good to anybody. There's lot of room for improvement - we need to keep our feet on the ground and keep driving this.

Despite the half-time deficit, head coach Farrell remained optimistic his side would find a clinical edge in the second period.

"We weren't frustrated in the sense that we knew from the players that when we were at our best, we were causing them trouble," Farrell said.

"The sense of confidence was there. We talked about just being calm and sticking to the process. There's all sorts of things that can go through your mind regarding thinking too far ahead and winning."

New Zealand hooker Codie Taylor returned from the sin bin to score a first-half breakaway try for the visitors, while 10 points from the boot of Jordie Barrett and a Will Jordan score kept them in contention until the end.

Ian Foster said Ireland's performance was the best he had faced as New Zealand head coach and had no complaints about the result.

"Congratulations to Ireland, they thoroughly deserved their win," Foster said. "I was really impressed with them today, they played a high-tempo game, kept us chasing.

"When it really mattered at the end, we just didn't quite have the composure to take the opportunity that we had presented to us.

"That was a very, very good performance and probably the best performance I've come up against in my time. I thought they were pretty polished."

The below-par All Blacks threatened to snatch victory but, trailing 23-17 with 11 minutes to go, Akira Ioane's try was disallowed for a forward pass to the frustration of Foster.

"I thought Akiri's was a great try but the TMO didn't and that's probably the story of the game," Foster said.