Despite feeling more than a little fearful, Dr Ranj Singh agreed to swap the cosy This Morning studio sofa for the rough and tumble of a rugby tackle bag as Mark McAdam took him to train with Harlequins for a special Rainbow Laces Day episode of 'I'm Game' 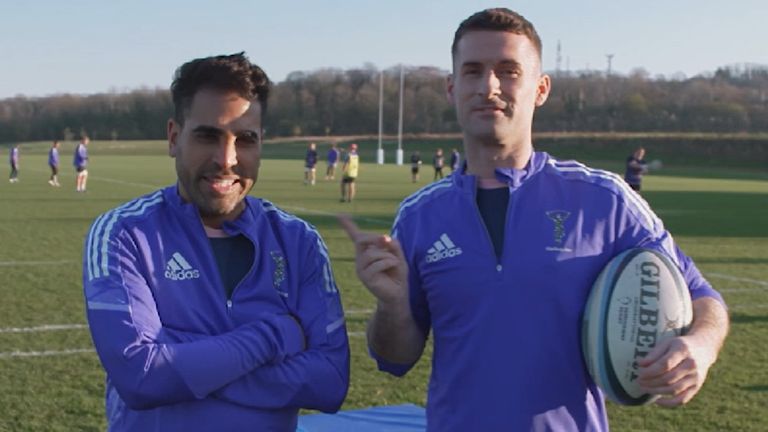 For TV's Dr Ranj, trust is everything - whether he's answering medical questions on This Morning, helping teenagers get through the rollercoaster ride of growing up, or most importantly, dispensing advice at a children's ICU in a London hospital.

However, the prospect of a day out at Harlequins' Surrey Sports Park training ground for a new episode of 'I'm Game', in support of the Rainbow Laces campaign, left the former Strictly Come Dancing star decidedly sceptical.

Host Mark McAdam throws down the challenge of a return to rugby union - a sport that Dr Ranj consciously avoided as a teenager back home in Kent.

But having recently been taken to watch a live rugby match, where he found himself enjoying the action and the atmosphere more than he expected, the paediatrician was prepared to take the plunge out on the pitch.

"I was hoping to reconnect with a game that I didn't get to enjoy when I was a kid," says Dr Ranj.

"I always felt like sport wasn't my place. I didn't feel very welcome."

The aim of 'I'm Game' is to take celebrities and sports stars out of their comfort zones, and on hand to help on this occasion was a Quins great - former England captain Chris Robshaw.

"I'm curious to play again," Ranj tells the flanker. "But it's been 30 odd years so I'm a bit rusty - and there's a part of me that is terrified!"

After the kitting out, it's time to warm up with some not-so-simple exercises, one of which requires Mark and Ranj to team up for a rugby 'drag race' - just not the version they enjoy watching from the comfort of their sofas.

There's a simple scrum introduction too, and then a chance to take a breather as Ranj reflects on his adolescence and early adulthood.

"My family are Punjabi Sikhs. We have a lot of culture and customs - a lot of that heritage is wonderful," he explains.

To all those people telling me to do my job… HIIIIIEEEEEEEEE! 👋🏾

Married at the age of 26, he came out as gay to his wife four years later and they subsequently divorced.

"I made choices that weren't always putting myself first," he says. "It was all about what's going to make those people around me happy."

Knuckling down and lifting up

There's certainly a parallel with sport, in which athletes who are LGBTQ+ often feel they must conform to their environments in order to be successful.

However, in recent years, men's rugby stars such as Robshaw have helped to shift perceptions and break down stereotypes in the game. By sharing pictures from Pride in London on social, supporting Quins' historic Pride Game matches, and speaking up on inclusion, the 35-year-old - who joined San Diego Legion in Major League Rugby after leaving the Stoop last year - is the definition of an active ally.

"I believe we are going in the right direction," he tells Dr Ranj. "We want to judge people on talent - the only reason you're not going to be invited back after today is because you're not good enough!"

In a bid to prove Robshaw wrong, Ranj throws himself into the tackle-bag test, with Mark bearing the brunt of his burst of enthusiasm.

Could Quins have unearthed a flanker sensation? "This is what sport should be about - it's about what you can do, not who you are," says the potential new recruit.

Alas, that's just one aspect of the game, and despite a kicking masterclass from the club's England back Danny Care, the good doctor is less precise with the boot, even leaving the Sky Sports cameraman ducking for cover.

There's just time for one more routine - and it proves to be the high point of the day.

Christian Scotland-Williamson towers above Ranj - the lock is well over a foot taller - and takes responsibility for a lift that's loftier than anything ever seen in Strictly.

"You're 100 per cent trusting the people around you. You feel really vulnerable," he says.

Find out what happened when Dr Ranj was hoisted in the lineout, and get his full diagnosis on what went down at Harlequins, by watching the video above.

Catch up on previous episodes of 'I'm Game' here, along with Jamie Carragher's trampolining test! Look out for another new episode on Sky Sports News later this week.

Your story of being LGBTQ+ or an ally could help to make sport everyone's game - please contact us here to discuss further.