Wales v England: Phil Davies has a boot in both camps

When the teams take to the field at the Principality Stadium on Saturday, one man that will be keeping a very keen eye on proceedings will be Phil Davies.

When you hear that name, one automatically assumes that it's the former Scarlets and Wales back row and now current Namibia head coach.

However, to the likes of Jonny Wilkinson, Phil Vickery, Alun Wyn Jones and George North, the Phil Davies that they automatically think of is someone totally different. The man in question is the former England Schools coach and more latterly, first-team director of rugby at Llandovery College.

In 1999, following his tenure with England Schools, the Davies family decided to move back to Wales and he was soon appointed director of rugby at Llandovery College. His impressive coaching techniques once again bore fruit and a number of current and former players plying their trade in the Aviva Premiership and across the Severn Bridge in Wales owe a great deal of gratitude to Davies' coaching.

The independent school in Mid-Wales, an hour north of Cardiff, has provided more Welsh internationals than any other school in Wales. The current captains of both Wales' men and women's sides - Alun Wyn Jones and Carys Phillips - were both educated at Llandovery.

Davies coached at Llandovery for 14 years before retiring in 2013. His roll call of past pupils at the Carmarthenshire school include George North, Rhodri Gomer-Davies, Emyr Phillips, James Merriman, Rhodri Jones, and Jack Roberts.

The College has another famous son in the late Carwyn James. He taught and coached at the school prior to leading the Lions to their first and only series win to date in New Zealand in 1971.

Davies believes that his former pupil Alun Wyn Jones will captain his country to victory at the Principality Stadium on Saturday and he also thinks the Ospreys lock would be the right man to lead the Lions this summer.

"As soon as Alun Wyn turned up at Llandovery, I knew we had a special player on our hands," said Davies. 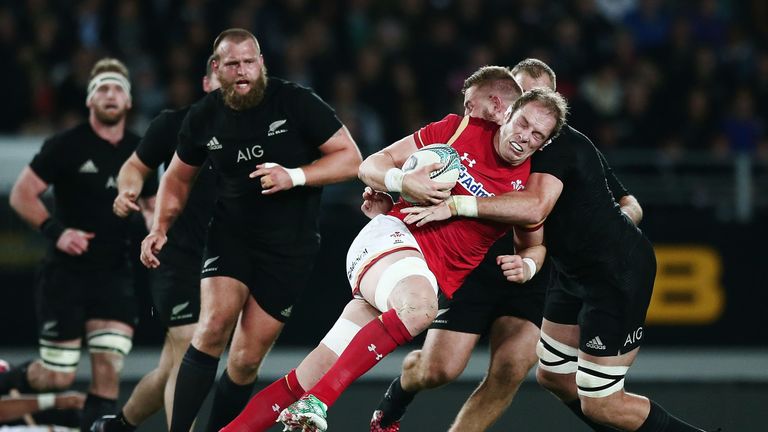 We had a number of impressive players come through the ranks at the college, but Alun Wyn was a class apart.

"We had a number of impressive players come through the ranks at the college, but Alun Wyn was a class apart. Every time he captained the college side, he led by example and was the perfect role model, both on and off the pitch.

"I always knew that he'd one day captain Wales, and I wish him the very best of luck this Saturday and hope that come the summer, he'll be leading the Lions down in New Zealand."

Saturday will be the 130th meeting between Wales and England in all competitions. The visitors narrowly edge the head-to-head battle winning 60 of those meetings. Wales have won 57, and 12 of the encounters have been draws.

In the last six matches in Cardiff, Wales have won four although England won the most recent meeting at the stadium 21-16 in 2015.

Will Greenwood had a prolific strike rate when turning out for England against Wales. He played them on five occasions in this tournament and was on the winning side each time, scoring six tries including a hat-trick in Cardiff in 2001.

The World Cup-winning centre believes Saturday will be another classic encounter but thinks that his fellow countrymen will come out on top.

"I loved playing against Wales," he said. "The atmosphere was always electric in Cardiff and there was nothing sweeter than coming back over the bridge with the big 'W' in the bag.

"My prediction for Saturday? Both head and heart say England."

Former Wales Captain, Ieuan Evans, the scorer of that try in Cardiff in 1993 believes the result will favour the men in red.

Evans played for Wales 72 times and scored an impressive 33 tries. He was captain on that famous day in 1993 when he scored the only try of the game to record a 10-9 win and prevent England from winning the Grand Slam.

He said: "Wales v England, a fixture to get the pulses going, a special occasion and electric atmosphere, though not sure we ever throw Daffodils Eddie!

"It is going to be a tight game with Alun Wyn leading Wales to victory."

Whatever the result come Saturday night, Mr Davies will be one proud coach.