We look at how all the British and Irish Lions players rated after the 2021 tour to South Africa which ended in a 2-1 Test series loss; Lions lose decisive Test 19-16 on Saturday

The British and Irish Lions fell to an agonising 2-1 series defeat after South Africa won the decisive final Test 19-16.

Here we rate the players involved against the Springboks.

Stuart Hogg: 5/10
The Lions stuck by him for the second Test but Hogg was shaky under the high ball and had no chance to shine in attack.

Liam Williams: 5
Appeared in the decider and while he lived up to his 'Bomb Diffuser' billing, he wasted a glorious try-scoring opportunity. 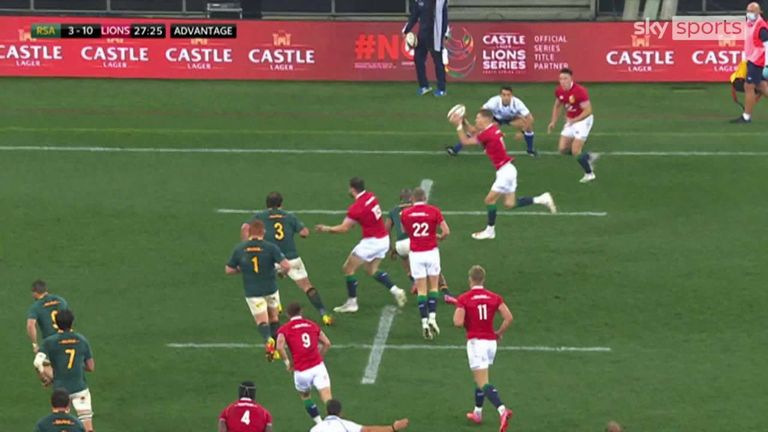 Anthony Watson: 6
The pick of the back three in the second Test yet was dropped by Warren Gatland. A lethal runner, but needed to see more ball.

Josh Adams: 7
The tour's leading try-scorer was in position to pounce in the decider in his solitary appearance in the series but Williams went it alone.

Duhan van der Merwe: 6
Saved his best until last. Lucky to escape the axe after first two Tests but his powerful running was a feature of the final clash.

Chris Harris: 6
Brought in for one Test and then jettisoned, but left his mark on South Africa with a crunching early tackle that was felt in the stands.

Elliot Daly: 6
Started the first Test at outside centre but the arm wrestle was not his type of match and he spent the next two on the bench.

Robbie Henshaw: 8
The pick of the Lions backs in the series and he will return to Ireland with his reputation enhanced.

Bundee Aki: 7
Among Gatland's regrets must be that Aki and Henshaw were not paired together until the end. Aki brought power and passion.

Dan Biggar: 7
Solid enough at fly-half but the change brought about by Finn Russell's entrance into the final Test was dramatic.

Owen Farrell: 6
Steady when he came on as a replacement in the first two Tests, but generally looked out of sorts on the tour.

Finn Russell: 8
What a difference a player makes. Transformed the Lions' attacking game in the decider, if only he had been fit for the whole series.

Ali Price: 7
Truly came alive when Russell stepped off the bench. Rose to the occasion and improved during the first Test.

Conor Murray: 6
Displaced Price for the second game and then found himself back on the bench. Best days are behind him.

Rory Sutherland: 5
Vulnerability at the scrum was exposed in the first Test and as soon as Wyn Jones was fit, he was gone.

Mako Vunipola: 7
Rediscovered some of his best form and can still be a force, but his scrummaging remains a weakness.

Wyn Jones: 8
Missed the first two Test with a shoulder injury and showed in the third why he had left a giant hole in the Lions' front row.

Ken Owens: 7
Scored a try from a maul and his only start in the decider saw a much tidier line-out display.

Luke Cowan-Dickie: 7
Unlucky to be dropped with the series tied at 1-1. Forceful and direct, although there were a few line-out wobbles in the opener.

Tadhg Furlong: 8
A stalwart of the series who never took a backwards step at tighthead. Scrummaged well and powerful in the loose.

Kyle Sinckler: 7
Served the Lions well as an impact replacement later on and should have been in the original squad.

Alun Wyn Jones: 8
'Lazarus' produced one of the most remarkable injury comebacks in rugby, all that was missing was a series triumph.

Adam Beard: 6
Brought on to the bench for the final Test to negate South Africa's maul and was fully involved in the close quarter combat.

Tadhg Beirne: 6
A strong tour never got the reward it deserved with two cameo appearances his only contribution to the series.

Courtney Lawes: 8
Alongside Itoje, the England bruiser was a towering presence in the first Test. A physical presence throughout.

Tom Curry: 7
More was expected of a player who has been pulling up trees for England. Defence and work rate were brilliant at times, but he was also quiet.

Jack Conan: 8
Another Irish ever-present for the series, Conan tackled and carried relentlessly. A rallying point for the Lions.

Taulupe Faletau: 6
A big-name casualty of Gatland's ruthless streak in selection and was disappointing for the 21 minutes he was on the pitch.

Sam Simmonds: 6
His only appearance was for the final quarter of the series but he was unable to turn the tide against the determined Springboks.

Hamish Watson: 6
Picked on the bench for the first Test and played only 24 minutes, but acquitted himself well.