Autumn internationals 2021: Louis Lynagh and Adam Radwan aiming to wing it for England

Wingers Louis Lynagh and Adam Radwan are among the up-and-coming players who have shone in the Premiership and are now aiming to earn a place in Eddie Jones' England squad for November's Tests against Tonga, South Africa and Australia

The day before England’s autumn internationals training squad gathered at The Lensbury for this week's three-day camp, head coach Eddie Jones was at the Twickenham Stoop for Harlequins’ Gallagher Premiership clash with Worcester Warriors.

Six of the 45-man squad Jones named last week were in action as the reigning Premiership champions triumph 35-29 over the Warriors, among them being one of the Australian's more intriguing selections in uncapped winger Louis Lynagh.

The 20-year-old, who scored two tries in last season's Premiership final success against Exeter and finished his maiden campaign with a total of six in 11 appearances, was not among the scorers as Quins made it two wins from two at the start of the new campaign.

But Lynagh has done plenty to impress head coach Tabai Matson since he linked up with Harlequins in the summer, and the former New Zealand and Fiji international centre is impressed with how the wide man seizes any opportunity he gets.

"At the end of this camp it will be really interesting to see if Eddie thinks he's going to be an international-calibre winger," Matson said. "What you want from your wingers is the ability to finish and he's been prolific.

"He's got lots of things to work on because international rugby is another step up again, but every week he just puts up his hand.

"Every time he gets an opportunity, he takes it and that shows us a glimpse of what he's capable of in the future."

I really enjoy pressure. I think being put in a group with 44 other guys who are regarded as the best in the country, I can only get better from that.

Lynagh has long been tagged for senior international honours, having been part of the England set-up at U16, U18 and U19 level despite being the son of Australia's Rugby World Cup-winning fly-half Michael Lynagh.

Eligible to play for Italy as well as England and the Wallabies due to being born in Treviso, Lynagh knows having such a famous surname comes with its own expectations. However, it is something he has come to embrace.

"Ever since I was a schoolboy, I've had a target on my back," Lynagh said last week after receiving his call up. "People say, 'Oh, that's so-and-so's son', they expect things.

"If I don't score two tries and run the length of the field, they call me a bad player. Ever since then I've been trying to overcome those odds.

"I really enjoy pressure. I think being put in a group with 44 other guys who are regarded as the best in the country, I can only get better from that."

Along with Lynagh and another player with a former international father in Northampton Saints' uncapped 21-year-old Ollie Sleightholme, one other emerging winger Jones will run the rule over ahead of November's Tests against Tonga, Australia and South Africa is Adam Radwan.

The Newcastle Falcons wide-man has slowly built his reputation in the north-east, coming through the academy set-up at Kingston Park and honing his skills with a loan spell at National League One club Darlington Mowden Park before making his top-flight debut in 2017.

A hat-trick on his England bow during the 70-14 win over Canada at Twickenham in July saw Radwan announce his presence on the international stage in style and while he will face tougher tests this autumn if he does get another opportunity, the 23-year-old has shown a tantalising glimpse of what he is capable of. 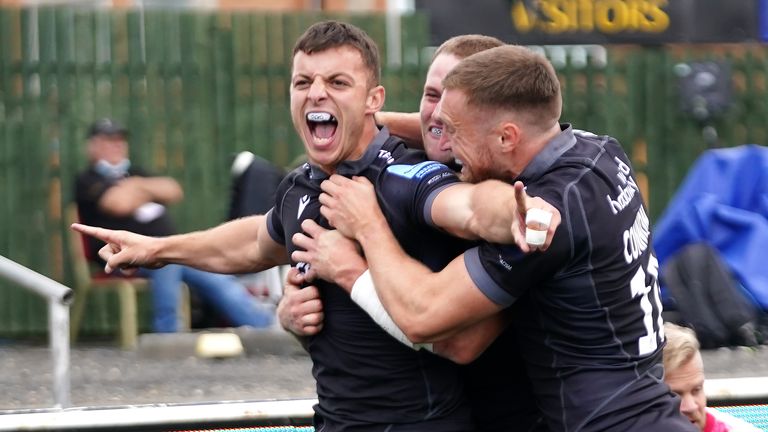 You give him a sniff, and I don't think there are many in the Premiership who are faster or whose footwork is as good.

"You give him a sniff, and I don't think there are many in the Premiership who are faster or whose footwork is as good," Falcons head coach Dave Walder said in the wake of Radwan grabbing his second try of the Premiership season during Saturday's 20-13 win away to Bath.

"He came back really well in the summer. He works very hard on his game, and if he can score tries like that, then it is all good.

"He is the sort of player we like to see at Newcastle."

The opening match of the autumn against Tonga perhaps offers Jones the best opportunity to experiment with his line-up, although barring injury it is unlikely any of the young wingers will usurp either of the established pair of Anthony Watson and Jonny May for the clashes with the world champion Springboks or an Australia side showing signs of improvement under Dave Rennie.

Nevertheless, players such as Lynagh and Radwan can stake a claim for future involvement and Jones is fully cognisant of the importance of bringing new players into the fold as England build towards the next global gathering in two years' time.

"We are now selecting with the World Cup in mind," Jones said. "Almost after the Lions tour, you draw bit of a line in the sand because then you're in the last two years before the World Cup and everything you do counts."