Sara Cox: Gallagher Premiership's first female referee striving to stay at the top of the game

Cox became the first woman to referee a Premiership game when she took charge of the match between Harlequins and Worcester. "At some point, when I'm a little bit older and retired I'll look back and say 'wow, that was pretty cool'," she said

It says much about Sara Cox's approach that in the aftermath of her history-making appointment as the first female referee of a Gallagher Premiership, her immediate thoughts were when she would get the opportunity to review her performance.

Cox took charge of the match between reigning champions Harlequins and Worcester Warriors at The Twickenham Stoop on Saturday, earning praise for her handling of the match and congratulations for continuing to break down barriers.

But after enjoying some down-time with her partner in central London the following day, the Devon official's focus switched back to working on her craft and how to ensure this appointment is not just a one-off.

"It's still a little bit surreal at the moment and there are still things I want to go back and look at, and I want to go back to that performance element of it and see where I can improve," Cox told Sky Sports.

"At some point, when I'm a little bit older and retired I'll look back and say 'wow, that was pretty cool'.

"The atmosphere was amazing, the players, the engagement I've had on social media, the engagement from family and friends has been unreal and I couldn't have asked for anything better, to be honest."

Cox's introduction to rugby came through playing for Cullompton, but injury led to her switching to officiating at the age of 17 and she has never looked back, becoming the world's first professional female referee when she became centrally contracted to the RFU in 2016. 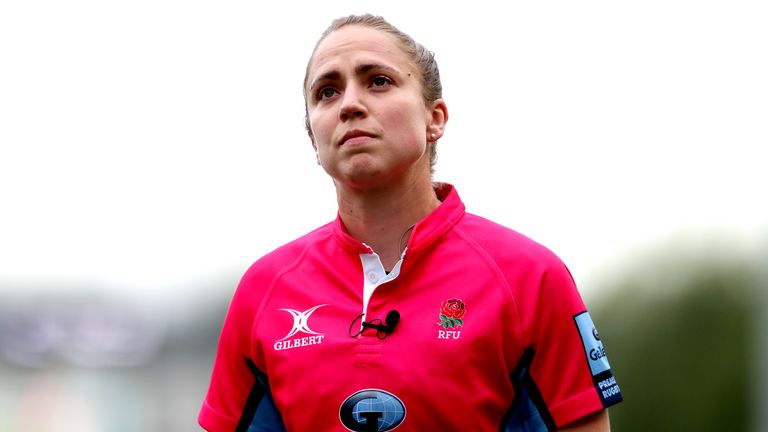 At some point, when I'm a little bit older and retired I'll look back and say 'wow, that was pretty cool'.

Saturday's first was another ticked off that list and while Cox has ambitions of making it to Test level, she has never forgotten the work she did in the early days of her officiating career to get to this point.

"Where I was based, I got involved in all of the community stuff on some pretty dire pitches all the way through to these plush pitches," Cox said. "For me, it was always about that journey through all that.

"There were some hard times when it was shooting down with rain and you're in a bog and just keeping going, and times where you didn't perform quite as expected. Then you go back to the drawing board and see where you can pull from other people as well.

"I'm working hard in the background to make sure I get better and better so there is that way of keeping that momentum.

"At the end of the day, if I stagnate, I don't deserve to be there so it's one of those where as long as I keep moving and keep getting better those appointments will come."

Cox hopes more female officials will start to make their way through the system, with the RFU doing more to encourage others to follow in her footsteps.

However, she sees herself more as a role model for all officials and hopes the attention which has fallen on her recently will help shine a light on the work referees put off the pitch as well as on it.

"Looking at some of the programmes the RFU put in place, I'd like it to be the case that we just go out and we are referees, not female or male referees - we just go and do our job," Cox said.

"I'm hoping I'm a role model for everyone, no matter what their gender is, and that it now brings a bit of light on what we do as referees.

"We do a lot in the background and we do a lot to better ourselves as well, so fingers crossed people start looking at that, want to be involved at any level and be part of the game."

As for Saturday's match itself, it did not pass of entirely without incident as Cox had to send Worcester winger Noah Heward to the sin-bin for an aerial challenge on Quins full-back Tyrone Green. 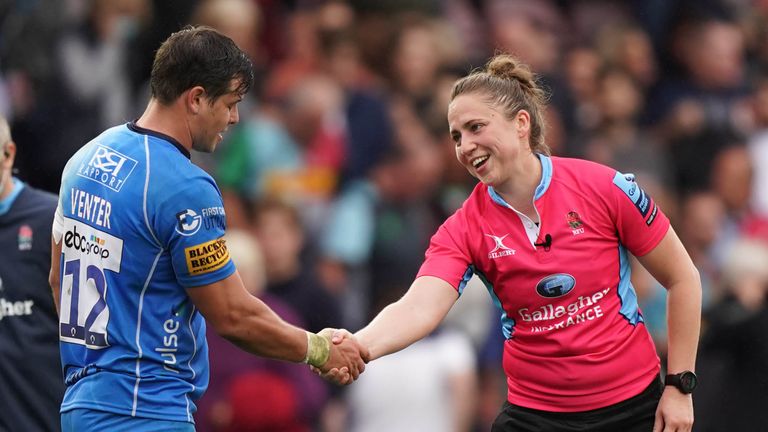 Every single one of them came up to me after the game and shook my hand and congratulated me, and it was really good because there are certain big names in there who've done amazing things.

Sara Cox on the response of the players on Saturday

Nevertheless, she was delighted with the response from the players during the game and, perhaps most importantly, had appreciation for a job well shown by both teams at the final whistle.

"They were amazing, and I honestly couldn't have asked for better from them," Cox said. "Every single one of them came up to me after the game and shook my hand and congratulated me, and it was really good because there are certain big names in there who've done amazing things.

"It's a learning opportunity for me, but for them to say congratulations as well and really buy into that, I couldn't have asked for any better."