By Raz Mirza at Queen's Club

Top-seed Marin Cilic will take on Nick Kyrgios for a place in the Fever-Tree Championships final at Queen's Club, after both won their respective quarter-final matches on Friday.

Croatian big-hitter Cilic will be feeling confident ahead of Wimbledon and having buried Fernando Verdasco and Gilles Muller in a barrage of aces, the world No 6 inflicted similar punishment on fifth-seed Querrey.

Kyrgios blasted 32 aces for the second successive match as he ended Lopez's reign as Queen's champion with his latest astonishing display of big-serving.

The world No 21 now has a tournament-leading 82 aces in his three matches at Queen's this week.

Kyrgios, who defeated Cilic to win the Marseille title in 2016, says he expects his semi-final clash on Saturday to be "very tough".

"I know it's going to be very tough," said the 23-year-old. "Last time I played him was a while ago, Marseille final, but, yeah, it's going to be tough. He obviously feels very confident on the grass and and looked really, really good against Querrey."

A resurgent Novak Djokovic, looking for his first Queen's Club title, ended Frenchman Adrian Mannarino's run with a 7-5 6-1 victory to record a milestone 800th career win for the former world No 1. 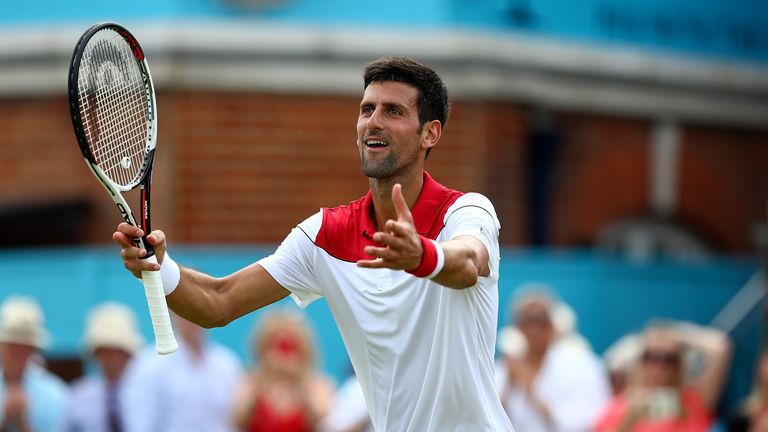 It's still the sport that I love with all my heart. I put in that heart every single day.

"When you work all your life for something and then you get rewards for it, of course it's obviously very positive and I'm thrilled. I'm grateful, as well, as I'm able to play so many matches and to win so many matches in my career.

"It's still the sport that I love with all my heart. I put in that heart every single day, and I'm just very glad to be able to play semi-finals here after Rome and Roland Garros tournaments that went pretty well for me."

The 12-time Grand Slam champion will face Jeremy Chardy in the last four after the Frenchman ended the hopes of American Frances Tiafoe 6-4 6-4.

Breaks at the start of both sets proved decisive as Chardy, who has won in Surbiton and reached the Libema Open final last week, saved all nine break points he faced.

We have tennis coverage from the ATP Tour as Roger Federer bids for another title at the Gerry Weber Open in Halle. Watch the action live on Sky Sports Arena this weekend.

We will have news, previews, live blogs, reports and expert analysis from Queen's, Halle, and Wimbledon. On the move? Head to our app for mobile devices and iPad, or follow our Twitter account @SkySportsTennis to join in the conversation.

Never miss the big kick-off or have to deal with interrupted games or low quality streams with a NOW TV Sky Sports Pass this summer. You'll get exclusive coverage of the 147th Open from Carnoustie, The Ryder Cup. England's summer Rugby tour to South Africa, ATP Tour, World Darts Matchplay, and loads more starting from just £7.99. No contract.