Novak Djokovic and Rafael Nadal are set to meet in the ATP Cup final as they helped their respective teams - Serbia and Spain - progress into the competition's deciding-tie.

The repeat of last year's Australian Open final will headline the singles ties on Sunday with Spain looking to add the ATP Cup title to their Davis Cup victory in November.

Djokovic and Nadal have met 54 times previously, more than any other two players in the Open Era, and currently the Serb leads the head-to-head standings with 28 wins to 26.

The world No 2 has won nine of the last 12 meetings against Nadal however the Spaniard showed that his tenacity is as strong as ever against Alex de Minaur in Spain's semi-final.

Nadal had to come back from a set down in order to prevail 4-6 7-5 6-1 against the Australian and as the pressure mounted, his level raised.

He endured De Minaur's relentless attacking play for most of the first two sets until he created a significant momentum swing.

After saving a break-point at 5-5, Nadal won six consecutive games to clinch the second set and take a 4-0 lead in the third.

The Spaniard didn't want a repeat of the previous night's loss to David Goffin so, after being broken by De Minaur, he broke back immediately and then served it out in two hours and 13 minutes.

Roberto Bautista Agut had earlier beaten Nick Kyrgios 6-1 6-4 to give Spain a 1-0 lead meaning that Nadal's result has ensured Spain's progression before the final doubles match. 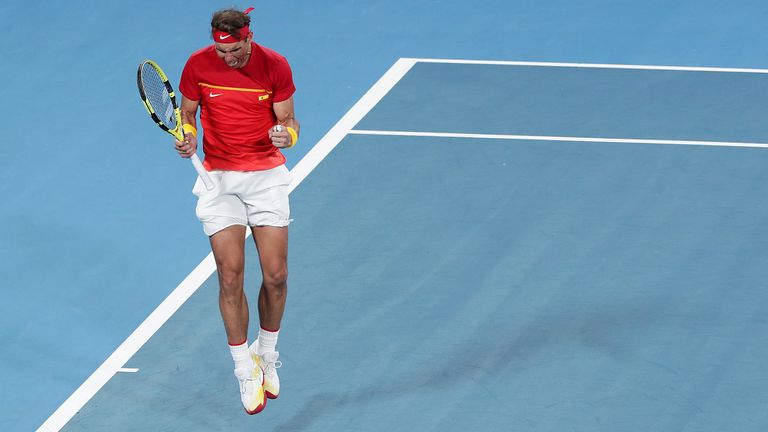 It's going to be a super tough final against Serbia. Novak likes to play here and Serbia has a great team and is playing very well. But Roberto played an amazing match this afternoon and we have a good team, so we are ready for it.

The Serbian dominated the first set with a game-plan that nullified the rangy Russian's strengths, before Medvedev rallied to level the semi-final clash.

In the deciding set, Djokovic gained a pivotal break in a long fifth game after a protracted rally ended in an exchange of volleys and drop shots.

However, Medvedev pushed him to the end and forced the world No 2 to produce some of his best tennis as he served for the match.

The seven-time Australian Open champion saved a break-point with some desperation - lunging to reach a volley, scrambling to get to a drop shot and then coming up with a makeshift forehand as he stretched back to get to deuce again.

It was a point that had the crowd and team-mates of both players on their feet.

After saving three break points in the last game, Djokovic completed the 6-1 5-7 6-4 victory to ensure that Serbia progressed into their first ATP Cup final.

"Exciting, exhausting, joyful, dreadful all at once," Djokovic said when asked for his summation.

"There were a lot of rallies and it was very exhausting. A very physical battle, but also mental battle ... some amazing points.

"Definitely one of the most exciting matches I've played against him or any of the top players in the last few years."

Dusan Lajovic had already beaten Karen Khachanov 7-5 7-6 (7-1) in the opening singles to provide the opportunity for unassailable 2-0 lead in the tie.