Serena Williams' rematch with Maria Sakkari comes close, but the Thiem vs Auger-Aliassime should be an instant classic

Dominic Thiem and Felix Auger-Aliassime will meet for the first time in what promises to be the popcorn match of this year's US Open.

The second seed from Austria has the experience and is hoping to finally get his hands on a Grand Slam title after three final defeats, including one to Novak Djokovic at the Australian Open in January.

But exciting Canadian Auger-Aliassime has been making the headlines at Flushing Meadows. The 20-year-old has not lost a set this week, and beat former world No 1 Andy Murray en route to the last 16 of a major for the first time.

Thiem has already said he will have to take his game to a higher level if he was to get the better of Auger-Aliassime in their first career encounter.

"The whole package is great. He's a great player, great person outside of the court. I think he has huge star potential. Unbelievable athlete, good looking. He has everything basically," Thiem admitted

"The only thing to my advantage is experience. This is his first fourth round at a Slam, so hopefully I can play that out a bit. It's going to be a nice one and I'm looking forward to it.

"I'm always looking forward to playing against these young superstars, as I'm 27 for a few days, not young any more."

I am not 100 per cent happy with the way I am playing yet.

"I am much happier, not 100 per cent yet, I still have to raise my level if I want to go deeper, especially in the next round," Thiem said of his game.

"Normally I am capable of doing this in the slams. I am not 100 per cent happy with the way I am playing yet. Today was a good win against a great champion and a good player and that should give me a boost."

Auger-Aliassime continues to look imperious, and his encounter against Thiem should be a tantalising clash.

The 15th seed trounced Corentin Moutet 6-1 6-0 6-3 to record his best performance in a Grand Slam.

He may still be baby-faced but he is determined to show a killer instinct on court.

"I'm here to impose myself," he said. "Outside the court I'm a pretty kind person but once I step on court, it's the best man that wins.

"Only one survives. You've got to step it up with that animal and killer instinct."

The Canadian is also aware of Thiem's strengths but Auger-Aliassime is more than prepared to test himself against one of the best players in the world.

"Obviously Dominic has been getting stronger and stronger year after year. You feel like step by step he's been reaching later stages of these tournaments, really becoming like a power in the tennis world," said Auger-Aliassime.

"For me, it would be a good match-up, interesting match-up for now, obviously to test myself against the best in the world, against the second seed of this tournament." 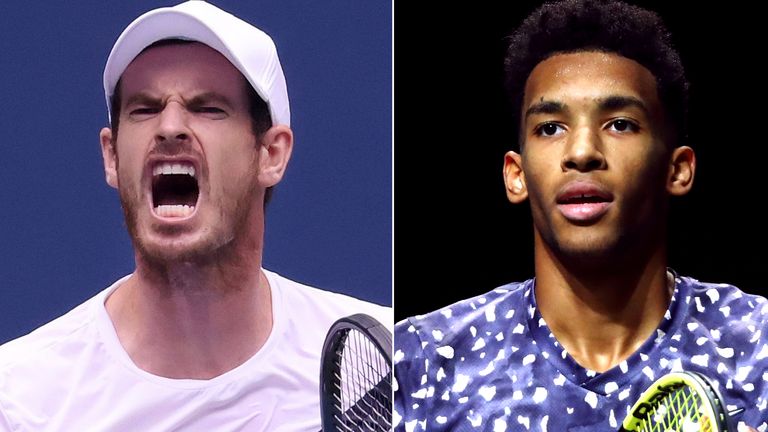 Britain's Murray was glowing in his assessment of young Auger-Aliassime before their second-round clash. A match which the Canadian won for the loss of just nine games in total against a three-time Grand Slam winner.

"He hits a big ball. He moves well," said Murray. "He's getting up to the top of the game. I think he quite obviously likes playing on the hard courts. He's had some struggles with his serve at times.

"He's a top, top young player. He'll have an excellent, excellent career for sure. He's been really good since he was very young. I think physically he's a fantastic mover, good athlete. He's developed fast."