Rafael Nadal extends his winning run at Roland Garros to 35 matches with a courageous four-set win over 10th seed Diego Schwartzman, who ended the Spaniard's streak of 36 consecutive sets won at Roland Garros

Rafael Nadal continued his bid for a record-extending 14th French Open title with a thrilling four-set victory over Diego Schwartzman in the quarter-finals.

In a repeat of last year's semi-final, Schwartzman performed magnificently to end Nadal's run of 36 consecutive sets at Roland Garros, but the irrepressible Spaniard rose to the challenge to book his place in Friday's semi-finals.

The capacity on a sun-bathed Court Philippe-Chatrier was extended to 5,000 fans for the first time this fortnight, and they were treated to a high-octane affair, which saw Nadal prevail 6-3 4-6 6-4 6-0 in two hours and 48 minutes.

We've got a match on our hands! @dieschwartzman takes the second set 6-4 against Nadal and ends his Roland Garros streak at 36 consecutive sets.#RolandGarros pic.twitter.com/4WwQ0H0Exr

Having advanced to the quarter-finals without dropping a set, Schwartzman was threatening a monumental upset against 'The King of Clay', who had lost just two of his previous 106 appearances on the red dirt.

Nevertheless, in the face of adversity, Nadal found another level to maintain his pursuit of a record 21st Grand Slam title; reeling off nine consecutive games from 4-3 adrift in the third to extend his winning run at the French Open to 35 matches.

The 35-year-old now faces a showdown against world No 1 Novak Djokovic for a place in Sunday's showpiece, after the 18-time Grand Slam champion battled past Matteo Berrettini in an eventful four-set affair on Wednesday evening

Imperious Nadal sends out a statement

Nadal was handed a time violation ahead of the opening set, but the indomitable Spaniard was undeterred as he defied some terrific tennis from Schwartzman to draw first blood in 45 minutes.

Schwartzman saved two break points in a high-quality fourth game, but a sequence of three consecutive breaks gave Nadal the upper hand and the defending champion duly closed out the opener with a commanding hold.

However, the Argentine brushed off that disappointment by storming into a 3-0 lead in the second. The 10th seed followed up a brilliant exchange at the net with a perfectly-pitched return to break, and suddenly the pendulum had shifted.

With Nadal's unblemished record at this year's Roland Garros under major threat, the third seed won 12 of the next 14 points to restore parity in the set, yet Schwartzman was unfazed, stopping the rot to move 4-3 ahead.

After the pair traded further holds, Schwartzman began to assert his authority in a series of gruelling baseline exchanges, and an uncharacteristic error from Nadal saw him lose his first set here since the 2019 final.

The 28-year-old also snapped Nadal's 38-set winning streak at Roland Garros back in 2018 and he was on the offensive early in the third, but having twice failed to fashion out break points from 15-30, he was inevitably punished in the closing stages of the set.

Despite executing some brilliant lobs earlier in the contest, Schwartzman's radar went agonisingly awry on break point at 4-4, and Nadal needed no further invitation, restoring his lead after landing 88 per cent of his first serves in set three.

This proved to be the beginning of the end for the diminutive Argentine, who was rendered helpless as Nadal produced a near-flawless fourth set to seal the deal in comprehensive fashion. 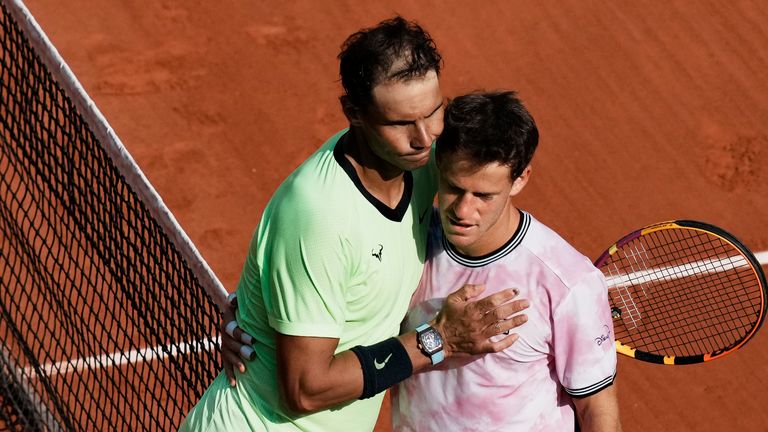 "Diego is such an amazing player with so much talent and I respect him so much, today was a very difficult challenge."

Nadal full of praise for Schwartzman...

The 20-time Grand Slam champion relinquished just five points in the final set, producing an array of outrageous winners and registering only two unforced errors to maintain his unrivalled love affair with the Parisian clay.

"Diego is such an amazing player with so much talent and I respect him so much; today was a very difficult challenge. To play in front of you where I have so much history is very special for me," Nadal reflected in his post-match address to the crowd.

"We know each other well, I started bad the second set and then was able to come back, but then the game at 4-4, returning with the wind helping, I played a bad game and had a tricky situation serving to not lose the set.

"Well done to him, he played well. I needed to play a little bit more aggressive and I think I did later, so I am very happy for that."