World No. 3 Alexander Zverev smashed the umpire's chair repeatedly with his racket after he and Marcelo Melo were beaten in their doubles match; the German had been due to face Peter Gojowczyk in the second round of the singles tournament; Zverev later apologised for his behaviour 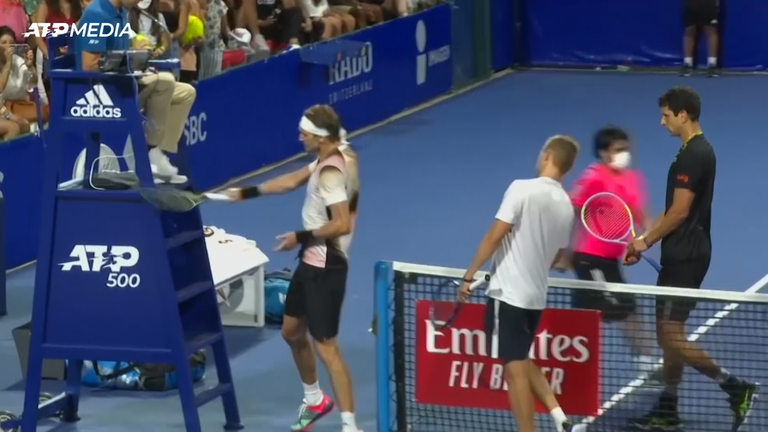 Alexander Zverev has been booted out of a tournament in Acapulco and faces a hefty punishment after repeatedly smashing an umpire's chair with his racket following a doubles match.

The incident occurred moments after the German and Brazilian partner Marcelo Melo were beaten 6-2 4-6 10-6 by Britain's Lloyd Glasspool and Finland's Harri Heliovaara,

The four players shook hands at the net before Zverev turned to the umpire and aggressively hit the chair with his racket three times, almost catching the official's leg with one swing.

As the umpire stood to climb down from his chair, 24-year-old Zverev walked back over and took another swing. He was heard to shout expletives towards the official too, having been upset by a line call earlier in the match.

Tournament organisers swiftly confirmed the world No. 3 would play no further part in the Mexican Open, posting on Twitter: "Due to unsportsmanlike conduct at the conclusion of his doubles match on Tuesday night, Alexander Zverev has been withdrawn from the tournament in Acapulco."

The ATP has yet to announce any sanctions, but its website shows the reigning Mexican Open champion's second-round opponent in the singles, Peter Gojowczyk, has been given a walkover to the quarter-finals.

'I am only disappointed in myself' - Zverev apologises

The German later apologised for his behaviour and has said sorry to the chair umpire.

"It is difficult to put into words how much I regret my behavior during and after the doubles match yesterday," Zverev said in an Instagram post.

"I have privately apologized to the chair umpire because my outburst towards him was wrong and unacceptable, and I am only disappointed in myself. It just should not have happened and there is no excuse. I would also like to apologize to my fans, the tournament and the sport that I love.

"As you know, I leave everything on the court. Yesterday, I left too much. I am going to take the coming days to reflect - on my actions and how I can ensure that it will not happen again. I am sorry for letting you down." 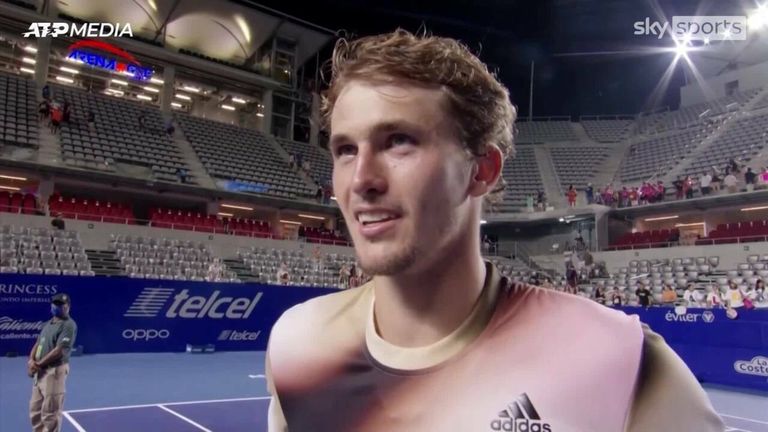 Zverev said earlier this week he was happy to have been part of history after beating Jenson Brooksby as their overnight tussle at the Mexican Open became the latest-ever finish to a professional match, ending shortly before 5am local time

The incident comes after Zverev and Jenson Brooksby created history the previous day as their overnight tussle at the Mexican Open became the latest-ever finish to a professional match, ending shortly before 5am local time.

The German second seed claimed a 3-6 7-6 (10-8) 6-2 victory in the best part of three and a half hours, eclipsing the 2008 Australian Open match between Lleyton Hewitt and Marcos Baghdatis, which finished at 4.34am.

Andy Murray was asked about the incident following his defeat by Jannik Sinner in Dubai.

Britain's former world No 1 said: "Look, it was not good. It was dangerous, reckless.

"I obviously understand lots of players, athletes across lots of sports, can get very frustrated. Certainly me, myself, I've not always acted in the way I would want on the tennis court. I'm certainly not claiming to be an angel. I'm not perfect myself.

"However, when you're ripping your tennis racket right next to the umpire multiple times, yeah, you can't be doing that.

"I know obviously one of the British guys who was playing, as well, a bit dangerous. It's graphite flying off the racquet, as well. Yeah, it was not good."

World No 1 Novak Djokovic agreed with the call to disqualify Zverev and hopes the German learns from his outburst.

Djokovic, who was disqualified from the US Open in 2020 after hitting the ball at the line umpire, said: "I made mistakes in the past where I've had tantrums on the court. I understand what the player is going through.

"But, of course, I do not justify his actions. I think the disqualification decision was not too harsh. I think it was correct under the circumstances.

"He has, with the words that he had in the statement, handled it in a right way. He said he made a mistake and his actions were not appropriate.

"Hopefully he can reflect on that and not let something like that happen ever again in his life. I'm sure he's going to approach it maturely." 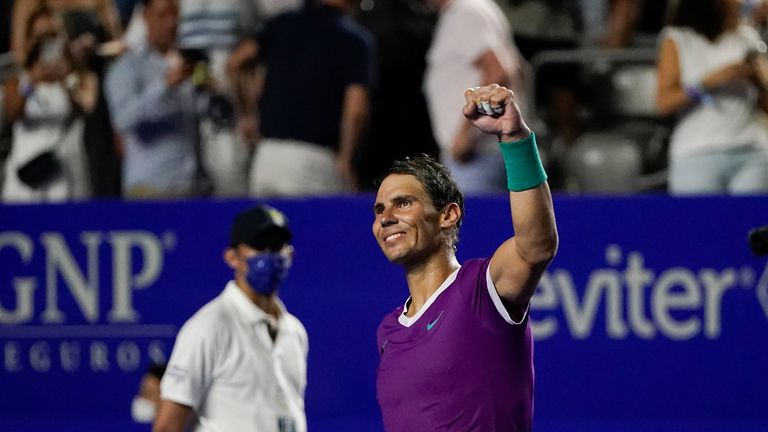 Rafael Nadal equalled his best career start to an ATP Tour season with a 6-3 6-2 win over American Denis Kudla.

Nadal, who played in his first match since winning the Australian Open, is now 11-0 this season.

The Spaniard will meet another American - world No 130 Stefan Kozlov in the second round.

"It has been a positive start, a good victory in straight sets. That's always very positive for the confidence," Nadal told the ATP after his win.

"I think I played a very solid match, a good effort today. Of course, there are a couple of things that I can do better, but in general terms, I played well so I can't complain at all."

British No 1 Cameron Norrie, fresh from securing his third ATP Tour title with a victory over Reilly Opelka in the final of the Delray Beach Open, also triumphed with a win over Daniel Altmaier.

The world No 12 will now face American John Isner in the final 16.