Andy Murray to 'make the most' of Grand Slam challenges

Andy Murray is "not expecting" to win Grand Slams into his mid-30s, despite the successes of Roger Federer and Rafa Nadal in 2017.

World No 1 Murray turned 30 last month but does not foresee himself challenging for top honours for many more years despite seeing Federer, 35, and Nadal, 31, win the Australian Open and French Open this year, respectively. 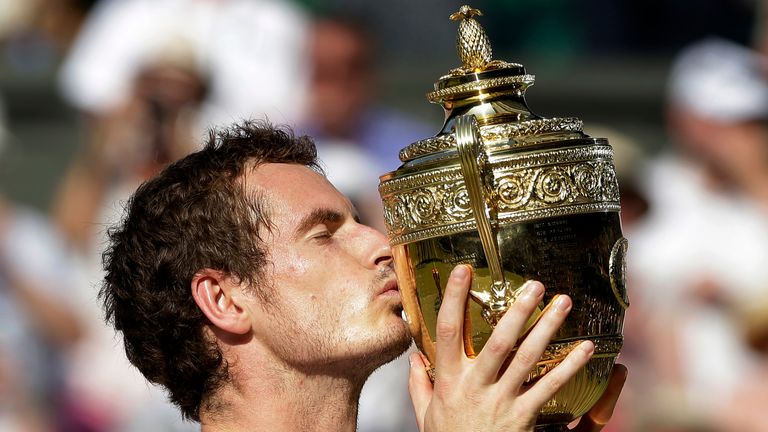 I'm not expecting to be winning Grand Slams until I'm 35 or 36, so I'll try to make the most of the last few years.

"I'm not expecting to be winning Grand Slams until I'm 35 or 36, so I'll try to make the most of the last few years," Murray told Sky Sports News HQ as he builds towards Wimbledon.

"I never thought I'd win one, so being on two [Wimbledon titles] and going with a chance for a third…

"I don't know how many more opportunities I'll get to compete for the Grand Slams so I want to make the most of it. That's why, after the French Open, I didn't take a long break.

"I took a couple of days off then I've been on the grass courts to prepare as best I can. Hopefully I'll get some good matches in at Queen's to set myself up for a good run.

"If I play well, I've shown in the past that I can win there. But I need to do everything right in the next few weeks because my game isn't where I'd like it to be."

Two-time Wimbledon champion Murray is not surprised to see Federer and Nadal still picking up Grand Slam honours because of their enduring quality.

"The guys at the top now - Federer, Novak Djokovic and Nadal - are three of the best tennis players that have ever played the game," said Murray.

"So even when your level starts to decline, when you're one of the best that's ever played, it's still enough to beat a lot of the players.

"I was speaking to my coach about it, who played until he was 34 - Ivan Lendl. He was still competitive at the top of the game until he was 32.

"The players travel with physios, they are spending a lot more time doing recovery which wasn't something that players were doing much in the past."

Murray most recently lost at the French Open in the semi-finals to Stan Wawrinka, but insists a long campaign in Paris could benefit his challenge for a third Wimbledon title.

"Had it not gone well in Paris, I would have come into the grass court season low on confidence and low on matches," he said.

"Winning five matches, then the semi-final match with Wawrinka which was hard to lose, will help me in the grass court season.

"I feel a lot better about my game now. Grass is a surface that I'm more confident on."

Andy Murray, a Jaguar ambassador, was speaking at the launch of the new XFSportbrake.

For those on the move, we will have Queen's Club, Halle and Wimbledon covered via our website skysports.com/tennis, our app for mobile devices and iPad, or follow our Twitter account @SkySportsTennis to join in the conversation. Who will win The All England Club titles this summer? Have your say...