Russian Daniil Medvedev becomes the sixth different winner of the ATP Finals in the last six years after thrilling victory against US Open champion Dominic Thiem. The final was a farewell to the tournament for London's O2 Arena which has hosted it for 12 years

Medvedev secured the biggest title of his career after battling from a set down to defeat third-ranked Thiem 4-6 7-6 (7-2) 6-4 in a thrilling finale.

In doing so, Medvedev became the first player in the 50-year history of the tournament to beat the world's three leading players at the same event.

The 23-year-old's triumph also meant London's tenure was bookended by Russian triumphs, with Nikolay Davydenko lifting the trophy in its first year in 2009. 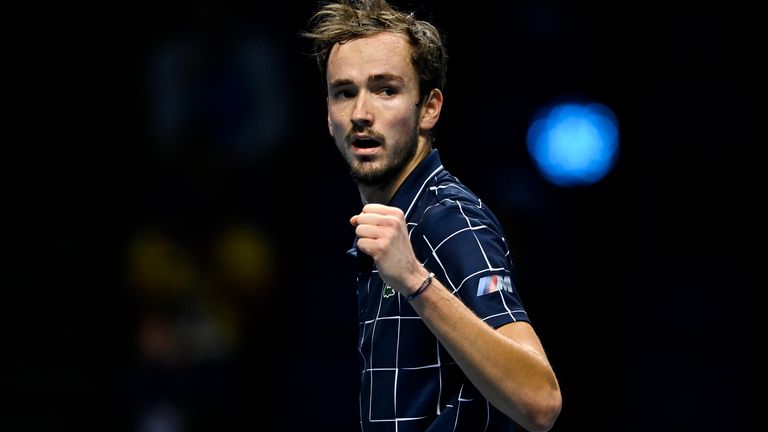 "What a match. One of my best victories. Against an amazing player, Dominic. Congrats already for what you achieved in your career. Your name is already in the history of tennis. You won a Grand Slam this year, you're playing unbelievable. I hope we're going to have many more matches to come on the big occasions like this."

Daniil Medvedev claimed the biggest title of his career

Thiem fought hard to hold his opening service game. He battled for 10 minutes as both players settled into their rhythm.

The Russian appeared to be coasting at 40-0 in the fifth game when a missed a smash at 40-30 and a double fault cost him and the US Open champion soon consolidated for a 4-2 lead.

Thiem went on to take it 6-4 thanks to a lucky net cord winner on set point leaving a frustrated Medvedev smiling at his opponent as they walked back to their chairs.

It was advantage Thiem, who had won his last 21 matches having claimed the first set. But Medvedev had already snapped Nadal's 71-match winning streak to reach the final and did not appear overawed by the task in hand. 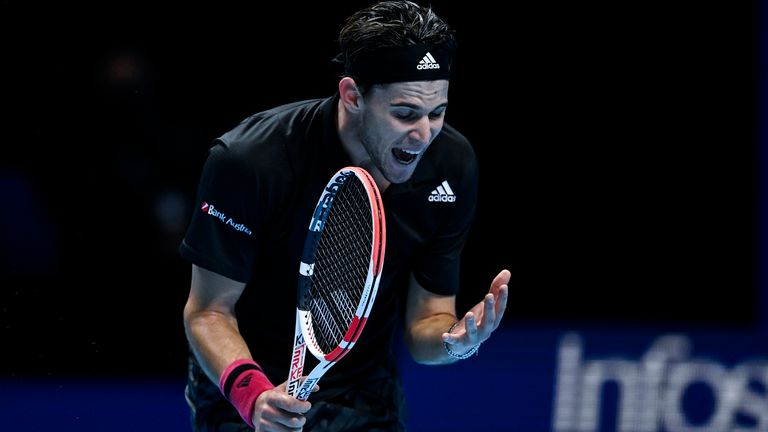 "Of course I'm disappointed but, at the same time, I'm also proud of the performance of all the week. Daniil really deserved it. Amazing match. Congrats for another great year as well. I hope that we'll have many great matches to come. It was a pleasure today even though I lost."

Dominic Thiem was proud of his week at London's O2

Thiem, who is now established as a major force, was attempted to go one better than last year when he lost to Stefanos Tsitsipas in the final. The Austrian was mixing his game up with slice, topspin, and flat forehands and backhands in an attempt to disrupt Medvedev's flow.

Medvedev, who entered the tournament having won the Paris Masters, saved two break points under mounting pressure to hold for 4-3 and the 24-year-old resorted to moonballing Thiem in the next game in an attempt to play havoc with his concentration. The third seed was forced into saving a break point of his own before holding serve.

The set was inevitably decided by a tie-breaker and it was Medvedev who pounced from 2-0 down by reeling off seven points in a row to send it into a final-set shoot-out.

In a tense third set Thiem saved three break points to hold for 2-1 but after fending off two more in the fifth game, Medvedev finally nailed his third opportunity with a smart crosscourt volley.

The Russian was playing a very smart match, not giving Thiem the rhythm to get his big groundstrokes flowing, and the third seed was beginning to look a little weary.

Medvedev was clinical on serve as he showed his versatility to keep Thiem at bay and keep his nose in front to complete a sensational comeback victory and finish November with an unblemished record of 10-0.

There was no celebration as he fired an unreturnable first serve on match point to end the contest and bring the curtain down on 12 memorable years for the tournament at London's O2 Arena before it relocates to Turin next year.

"My level of game here and especially the last two matches I won are just unbelievable," said Medvedev.

"I think it can give me a lot for my future career. To beat Dominic today is probably my best victory of my life. It's a great boost of confidence for all the slams coming up."

Well played @DaniilMedwed - undefeated in London to win the ATP Finals. Both you and @ThiemDomi have had a great year and fought hard to the end. I'm sure 2021 will bring more success to the game's fastest-rising stars. 🚀

Dutchman Wesley Koolhof and Croatian Nikola Mektic ended their team debut season with their first title as they beat Jurgen Melzer and Edouard Roger-Vasselin 6-2 4-6 10-5 to lift the ATP Finals trophy.

Don't forget to follow us on skysports.com/tennis, our Twitter account @skysportstennis & Sky Sports - on the go! Available to download now on - iPhone & iPad and Android - See you in 2021 when we return for the Australian Open.