Lauren Winfield Hill shared a record Hundred opening partnership of 64 with Jemimah Rodrigues, whose 60 from 41 balls laid the foundations for Northern Superchargers to clinch their second straight win of the tournament, beating Trent Rockets by 27 runs 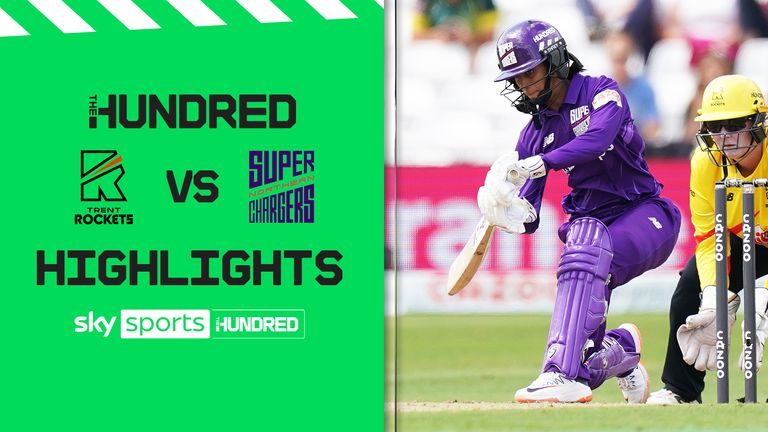 Northern Superchargers' Jemimah Rodrigues starred again with 60 from 41 balls as her side beat Trent Rockets by 27 runs in the Hundred to make it two wins out of two.

The Jemimah Rodrigues masterclass moved down the M1 from Headingley - where she had smashed an unbeaten 92 at the weekend - for another display of destructive batting that set up a second straight victory for the Superchargers.

Rodrigues capitalised after surviving a first-ball lbw appeal and went on to amass 60 from 41 deliveries as she and Lauren Winfield-Hill (33 from 29) put together a Hundred record opening partnership of 64.

Laura Kimmince weighed in with a brutal 31 from 13 and, although Rockets seamer Sammy-Jo Johnson captured a flurry of late wickets, the Superchargers set their hosts a stiff target of 150.

Rockets skipper Nat Sciver battled gamely to keep her side in contention, hitting 33 from 23 balls and, with Katherine Brunt (43 not out from 36) offering sterling support, they advanced to 71-2 at the halfway stage of the chase.

But Hollie Armitage's return catch to dismiss Sciver stunted the Rockets' momentum and wickets began to tumble, with spinners Katie Levick and Linsey Smith taking 2-20 and 1-12 respectively as the home side closed on 122.

Who knows how differently the afternoon might have unfolded if Trent Rockets had decided to review the fourth ball of the match, when Brunt had what looked a decent lbw shout against Rodrigues turned down?

😱 WHY NO REVIEW? 😱#TrentRockets would have had Saturday's star performer Rodrigues out lbw for a first-ball duck if they had called for DRS...

How costly could that prove? 🤔

In fact, it was better than decent - HawkEye revealed that Brunt's inswinger, despite striking the Superchargers batter high on the leg, would have gone on to hit the top of the stumps.

But the Rockets allowed the DRS timer to run down and, instead of removing the in-form Rodrigues for a duck, they were left ruing that decision as she went on to register back-to-back half-centuries and lead the Rockets to a sizeable total.

It's hard to look beyond Rodrigues, whose batting was inventive but also controlled and she again proved herself expert at picking out the gaps, leaving the power hitting to the likes of Winfield-Hill and Kimmince.

Although Sammy-Jo Johnson eventually had the opener caught at long on, an average of 152 from her first two Hundred innings certainly doesn't look all that shabby.

Although her efforts with the bat were ultimately in a losing cause, Nat Sciver produced several classy strokes during her innings of 33 from 23.

As well as using her feet to thump Levick for three consecutive fours, the Rockets captain displayed her good sense of timing, waiting for the ball to come on when Alice Davidson-Richards varied her pace - and pummelling it cleanly to the cover boundary.

IF AT FIRST YOU DON'T SUCCEED...

Sammy-Jo Johnson might have made the breakthrough for the Rockets when Winfield-Hill drilled a half-volley straight back at her but, despite going for it with both hands, the bowler was unable to cling on. 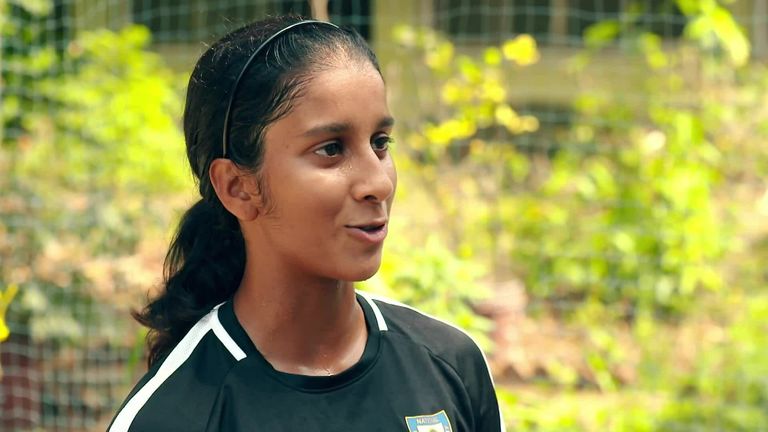 Rewind to 2018 when Nasser Hussain caught up with India superstar Jemimah Rodrigues, who has scored back-to-back half-centuries in The Hundred

However, Johnson made amends when she came back on and tempted Laura Wolvaardt to drive, stooping to hold what was arguably a harder caught and bowled chance just off the ground.

The seamer went on to finish with figures of 4-15, including two wickets in successive balls right at the end of her spell.

"It's a bit bitter-sweet for me. It's nice to contribute but it would have been nicer to get two points on the board. The wicket was playing really nicely, with a fast outfield, and I tried to take as much pace off and use my variations and that was effective on that wicket.

"We had them under pressure with the ball initially, although we could have done with wickets at that stage. The way Rodrigues is batting at the moment we didn't have good enough execution with the ball. That let us down a bit and a few errors in the field helped them put that total on the board.

"With the bat, Priesty and myself want to go out and set the tone at the top of the order but we haven't been able to do that yet. Nat and Katherine played nicely but we need to take the pressure off the girls in the middle a bit."

"In all areas of the game, we stayed calm. The batting was brilliant. We started off well with Lauren and Jemimah - being in the form she's in, she was fantastic.

"As the bowling innings went on, we realised it was getting slower. So taking pace off was the way to go, especially with the batters they have liking pace on. I'm delighted with my own form. I'll certainly take my figures over the first two games.

"The team environment's brilliant at the minute. We're putting in some really good performances. Hopefully on Wednesday we can go three from three."

The Hundred roadshow hits Cardiff for the first time, with Welsh Fire aiming to singe their visitors from Southern Brave!

The women's teams gets things under way at 3pm, followed by the men's fixture at 6.30pm.

Watch both games on Sky Sports The Hundred and Main Event, as well as the Sky Sports Cricket YouTube channel.