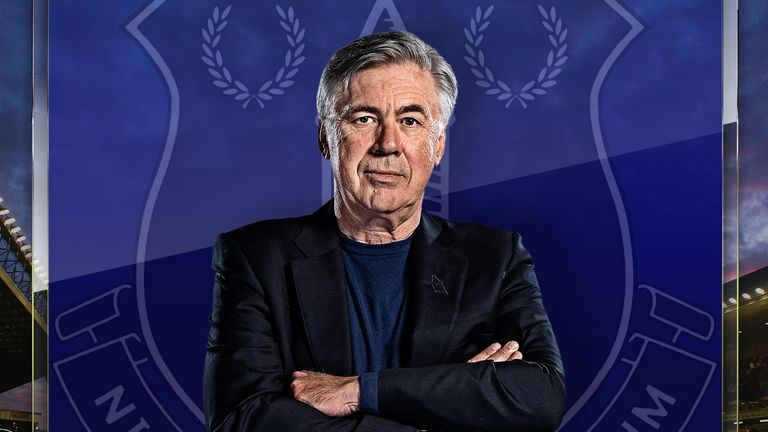 It is nearly a year since Carlo Ancelotti first walked through the doors of Finch Farm as Everton manager, but it still feels like the Italian is only just getting started.

His daily waterside strolls close to his house in Crosby and his affinity with the area instantly warmed him to Evertonians, who had spent last Christmas in a state of shock following his appointment.

In many ways, arriving halfway through a season with the side positioned at the wrong end of the table, the rest of the 2019/20 campaign was a case of consolidation - but with Everton sitting in sixth place ahead of facing Leeds this weekend, live on Saturday Night Football, Ancelotti is moulding a team in his image.

"I can say a lot of things about this," he told Sky Sports, reflecting on the past 11 months. "This year has flown by and a lot of things have happened. We've all had a difficult period with the lockdown but I think most about the fantastic reception that I received and using the time to have a look around the area where I live. "I've really enjoyed my time, and from a sporting aspect I feel the team has improved. We're better compared to last season and our aim is always to get better."

The Everton manager is yet to share the touchline during his illustrious managerial career with Marcelo Bielsa but will pit his wits against the Leeds boss this weekend at Goodison Park.

"I've never met him personally," Ancelotti continued. "It's the first time that I can meet him, but I'm really attracted to the style of play of his teams.

"When he was at Athletic Bilbao, it was the same. I love his style of football and I would love to spend time with him when it's possible to talk about football." 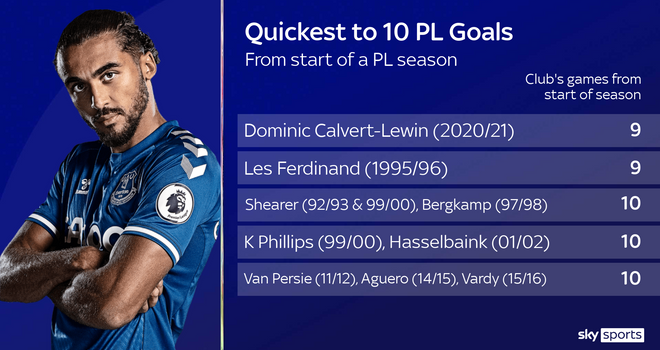 Dominic Calvert-Lewin leads the top-goalscorer charts with 10 after nine games, the joint-fastest to reach that tally from the start of any Premier League season.

So has Ancelotti set his striker a goal target for the coming campaign with 29 league games still to play?

"No, I haven't personally. I'm really not so interested in the target of the individual but for the squad to be competitive. It's true that Dominic is helping us at this moment really well and is doing a fantastic job, and I hope he can continue doing that. 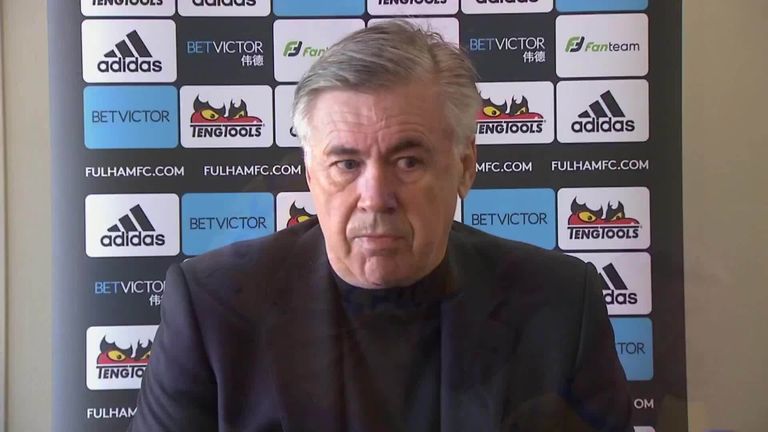 "But the target isn't just scoring goals, but primarily to work well for the team - like the others. He's improved a lot in the box [during the past year]. He's more focused now in the box and for this reason, we can use his qualities better.

"He's fast and he's good with his head and so in the box, compared to last season, he's now more focused on playing in the final third and his finishing."

After Everton's fast start to the campaign in which they reeled off four wins from their opening four league games, their form hit the buffers following the suspension to Richarlison for his red card in the 2-2 draw with Liverpool.

Three defeats in his absence underlined his importance to the side, and Everton have still not won a Premier League game without the Brazilian since he joined the club in the summer of 2018 from Watford. 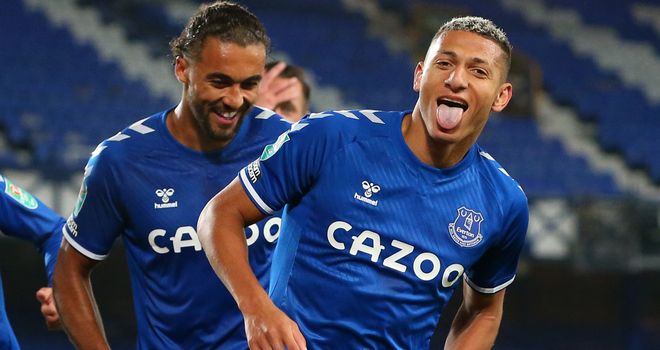 Richarlison is essential for Everton and his availability is evidentially key

Richarlison has scored 33 goals and claimed nine assists in 87 appearances during his time at the club, but the team have recorded four draws and four defeats in the eight league games he has been sidelined.

Ancelotti admits he spoke with the player during the weeks in which the forward watched the side suffer defeats against Southampton, Newcastle and Manchester United.

"It was a mistake what Richarlison did against Liverpool and it could help him to be better in the future."

Get all 8 Sky Sports for just £15 a month with our Black Friday half-price offer.

Getting the best out of James 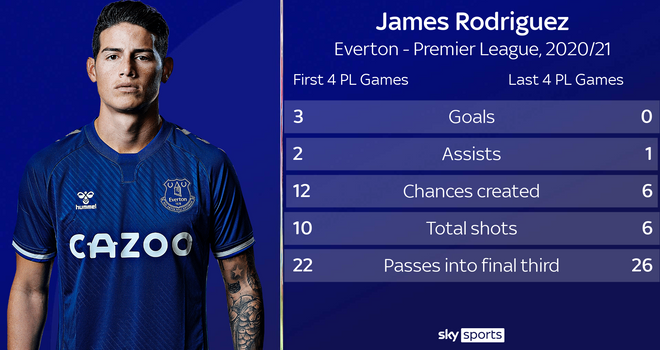 James Rodriguez was absent during Everton's one other league game

James Rodriguez played a central role during Everton's early-season purple patch, but a 'small problem' ruled him out of the trip to Newcastle and the Colombian's recent tendency to fade in matches suggests he is still nursing his way back to full fitness.

Everton finished 12th last season - their worst position in 16 seasons - but the arrival of Rodriguez is a sign of Ancelotti's pedigree and reputation that has supporters believing again.

The 29-year-old has failed to register a goal or an assist in his past three matches having managed six goal involvements in his first five games, but being able to train for a full week at the training ground has aided his recovery.

"His condition is good because he trained this week," Ancelotti said. "He has gained back some physical condition and is much better now. His position on the pitch remains centre-right, and sometimes he plays behind Calvert-Lewin but I think with the ball I give him more creativity and more freedom." 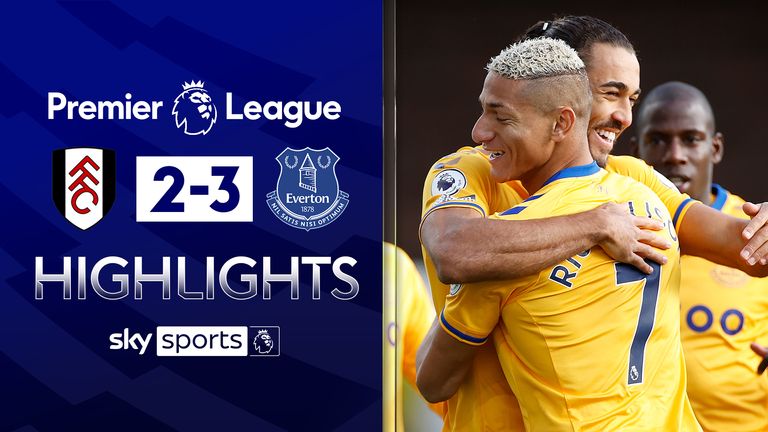 For 45 minutes at Craven Cottage last weekend, the swagger of the Everton side that won their first four games of the season returned. But their composure and confidence dissipated in the face of sustained Fulham pressure in the second period as the hosts very nearly staged a comeback.

Everton survived but Ancelotti knows he will need to bring greater consistency across two halves if his side's recent wobble is not to become a recurring theme that derails their European hopes this season.

"I feel the second-half performance was affected by the physical condition of the team," he admitted. "Because all the international players came back to the club on Thursday afternoon, we were not ready to prepare physically.

"We played really well in the first half, but in the second period our levels went down and we had to make sacrifices in order to get the result." 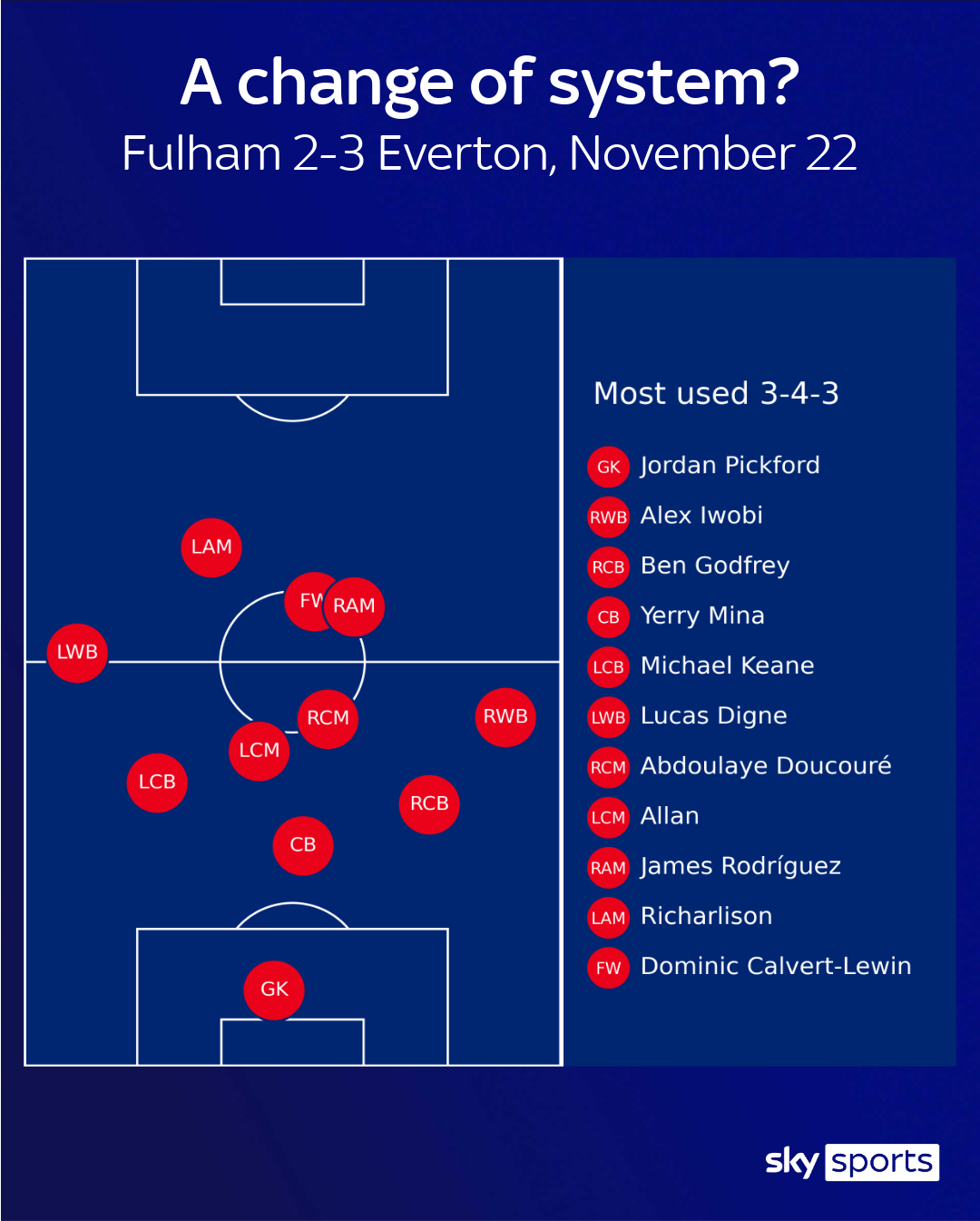 In the defeat at home to United before the international break, 51 per cent of the visitors' attacks came down Everton's right-hand side as Ole Gunnar Solskjaer sought to pick at an apparent weakness with Rodriguez providing Seamus Coleman with little protection.

Ancelotti spent the international fortnight seeking to address this issue, and opted to revert to a back-three formation with Alex Iwobi joining Lucas Digne as wing-backs in the absence of Coleman.

The system allowed Rodriguez to focus on his strengths as an offensive player, and the benefits were clear to see during an enterprising first-half display at Fulham - in which Everton added to their impressive figures among the league's fast starters. 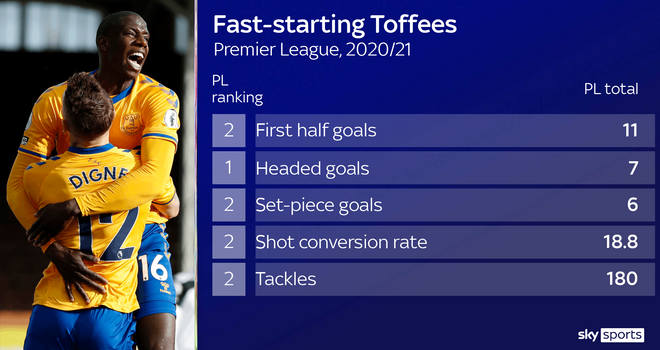 With Digne set to join the club captain for a period on the treatment table with ankle ligament damage, it remains to be seen how Everton look to approach the hectic festive period.

Being stripped of the Frenchman's creativity and leadership for possibly two months leaves Ancelotti with another conundrum to solve, but the 61-year-old was keeping his cards close to his chest when asked if it would be sticking to a back three.

"We tried it and I think we saw a good response," Ancelotti said. "I think we can try it again as it doesn't depend on the shape of the opponent. It depends on us and where we are more comfortable.

"The fact that Coleman wasn't there was the reason we changed to it as we didn't have a proper right-back. Jonjoe Kenny was also coming back from an injury and wasn't 100 per cent fit so we decided to do this.

"The players overall at the back were more comfortable. It's true that we conceded two goals and that's where we need to improve - not as a defence but as a team."

Coleman remains out this weekend as he continues to follow an individual rehabilitation programme following a hamstring injury he aggravated while on international duty, meaning Ancelotti may only make the one enforced change to replace Digne for the forthcoming fixture with Leeds.

Bielsa's side have produced 130 shots in the Premier League this season - only Liverpool have managed more - so the Everton manager knows his team will have to defend better if their recent record of conceding at least twice in their last six league games is to come to an end on Saturday.

"Against Leeds, we will have to be compact, as they're a team that like to attack with a lot of players," added Ancelotti, who has made 22 changes to his starting XIs this season - the most in the division. 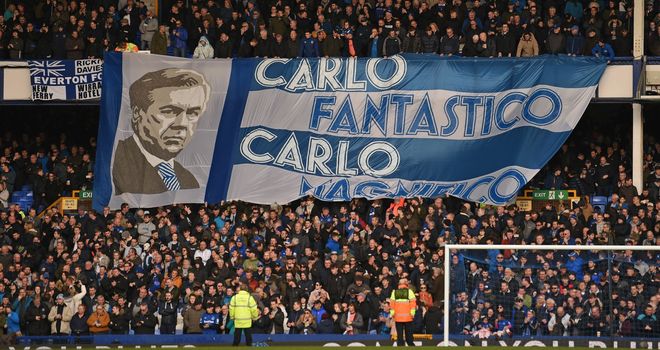 Ancelotti is looking forward to welcoming some fans back next month

The Government announced on Thursday its updated tier system for England which will apply when lockdown ends next month, with Liverpool's Tier 2 status meaning that 2,000 Everton fans will be allowed back for home fixtures, starting with the game against Chelsea on December 12.

The club will hold a ballot process for season ticket holders and hospitality members, and Ancelotti is encouraged by the developments as he looks ahead to welcoming supporters back to Goodison Park.

"It's good news - it's a start to have not only our supporters back but those of other teams. It's a little bit strange to play without crowds so the fact that we have supporters back in the stadium, it's really good news for football." 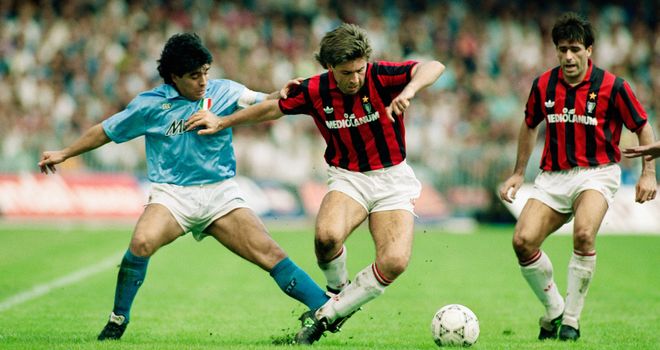 At the time of the interview, less than 24 hours had gone by since the passing of Diego Maradona, a player who shared a pitch with the Blues boss on several occasions in Serie A, with their respective clubs AC Milan and Napoli.

Ancelotti labelled the football icon as 'eternal' in a touching tribute on social media shortly after his death was confirmed, and the former midfielder admits that devising a plan to nullify him was an impossible task.

"At that time, he was the best player in the world," Ancelotti finished. "He had a lot of skills and a lot of quality. When you play against the world's best player it's always difficult and sometimes unstoppable. 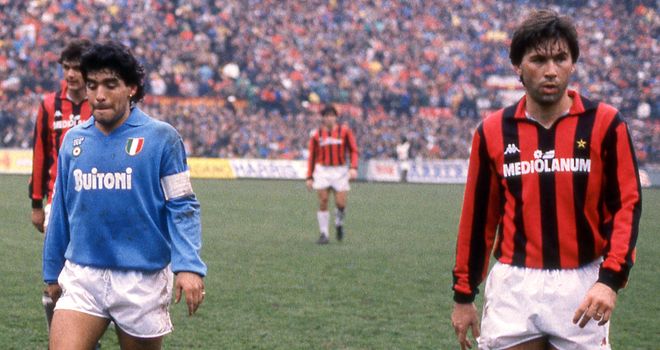 "We didn't try to man-mark him because we played in zones defensively at Milan and he was playing as a No 10 while I was in my zone but it was really difficult to stop him because he had fantastic ability.

"He won a lot in the game, and at that time victories came via him because he was the best player. With Argentina in 1986, I think he won the World Cup alone. When he was at Napoli, he did really well. Napoli won the title and in that period, he was a player who could win games alone."

Everton vs Leeds will be broadcast live on Sky Sports Premier League from 5pm on Saturday Night Football; kick-off at 5.30pm.

Sky Sports customers can watch in-game clips in the live match blog on the Sky Sports website and app.

Plus, Tim Thornton has the latest from Leeds and Sheffield United - including the story of how the Blades almost signed Diego Maradona! Charlotte then makes her bold Pitch for what she thinks will happen in this weekend's Premier League action…Listen to the Sky Sports Pitch to Post Podcast on: Spotify | Apple | Castbox 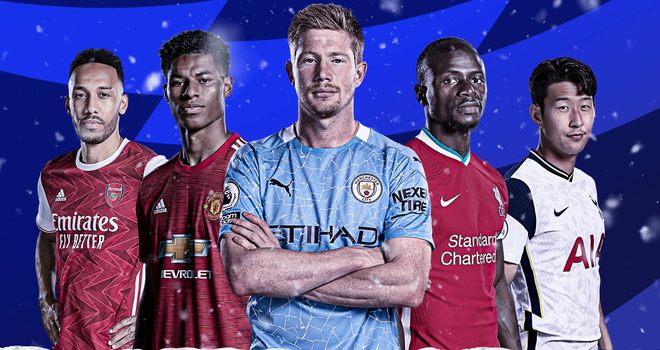 Sky Sports has announced a bumper December schedule of Premier League football, with 27 live games across the month.

Two Premier League games will be shown live on Sky Sports on Boxing Day, including Chelsea's trip to Arsenal, with Tottenham's visit to Wolves and Liverpool's home clash with West Brom on Sunday December 27.