Barcelona sack Ernesto Valverde: Where did it go wrong for head coach?

Barcelona sack Valverde, despite being top of La Liga

Ernesto Valverde has been sacked after two-and-a-half seasons

Barcelona have parted company with Ernesto Valverde despite the club being top of La Liga, but problems have been brewing beneath the surface throughout his troubled reign.

Summit talks were held between director Javier Bordas, chief executive Oscar Grau, technical secretary Eric Abidal, and assistant Ramon Planes over the weekend, and the decision has now been made to relieve Valverde of his services.

The galling manner of the defeat to Atletico in Saudi Arabia - leading 2-1 heading into the final nine minutes only to lose 3-2 - has forced the Catalan giants to seek a change in peculiar circumstances. 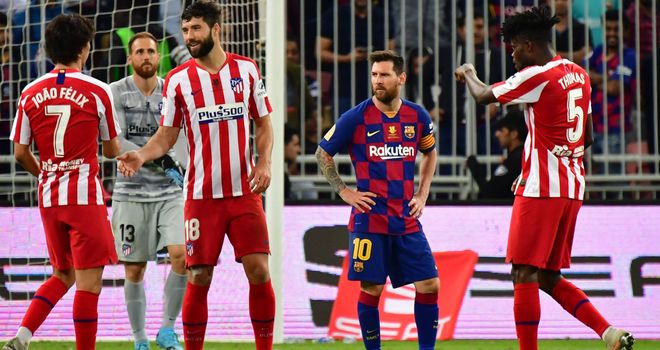 Confidence in Valverde depleted after the defeat to Atletico Madrid

Barcelona sit top of La Liga on goal difference ahead of Real Madrid, and they advanced to the Champions League last 16 as group winners.

Valverde secured back-to-back La Liga titles in his two full seasons in charge, while also lifted the Copa del Rey and Spanish Super Cup in 2018. He signed a new contract last February which was set to expire this summer, but with the option of extending it for another 12 months.

The Atletico defeat, however, and the way in which club supporters in Saudi Arabia booed Valverde throughout, pushed the Barcelona hierarchy to act now. 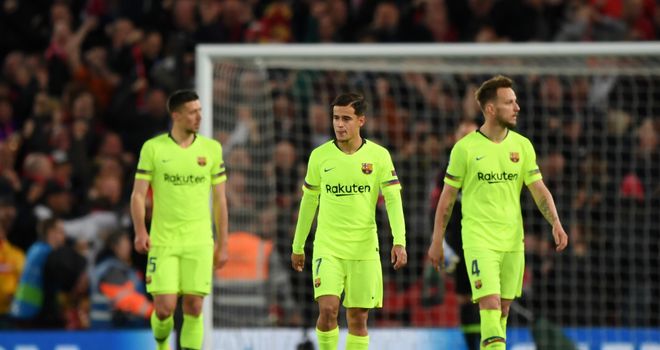 Barcelona succumbed to a shock Champions League defeat at Anfield

The timing of the former Athletic Bilbao and Espanyol coach's departure does not point to his failure to land a sixth European Cup, with Barcelona facing Napoli in the last 16 next month - but his record in that competition certainly counted against him.

After losing on away goals to Roma in the quarter-finals in 2018 despite winning the first leg 4-1 at the Nou Camp, further ignominy came last season when Valverde's side surrendered a three-goal advantage to lose 4-3 on aggregate to Liverpool in the semi-finals last season.

His domestic success was ultimately soured by those European nightmares. Where Pep Guardiola lifted the Champions League twice in four seasons, Valverde was unable to build a side with such mental fortitude. 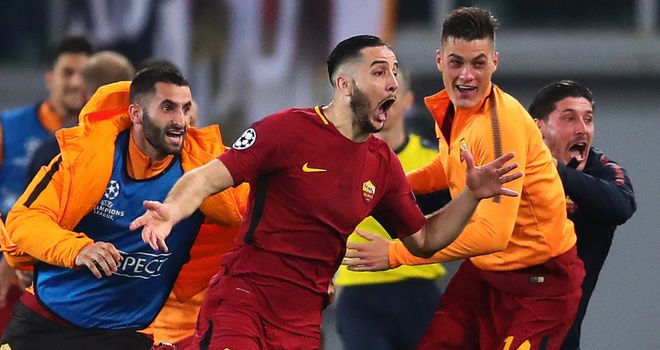 Valverde won 18 of his 28 Champions League matches, drawing eight and losing on just those two occasions. But many argued the 55-year-old was fortunate to be kept on given the harrowing manner of those second-leg capitulations.

Speaking after the Anfield debacle last May, he said: "The most painful thing is to repeat [the mistake] of a year ago."

As they crumbled to defeat against Atletico, there were reminders of those collapses in Rome and Liverpool. The growing feeling was that further anguish on the continent lay in store. 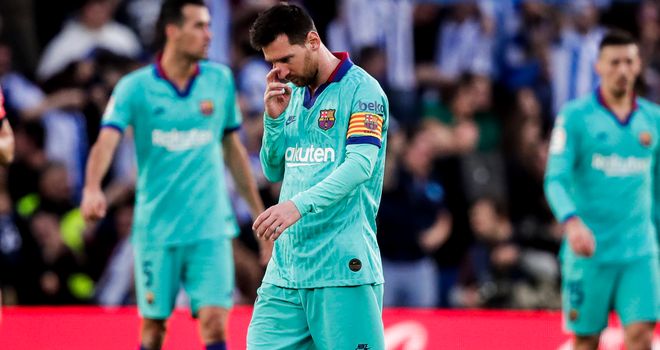 Barcelona have been over-reliant on Lionel Messi's goals this season

Things have unravelled since the start of the year as Wu Lei rescued a late point for Espanyol in their 2-2 derby draw. In a top-versus-bottom clash, Barcelona were expected to dominate, but they were a shadow of themselves, suffocated by their opponents.

The dismissal of Frenkie de Jong was symptomatic of how the contest had gone for the visitors as he was punished for a sloppy mistake with his poor decision-making forcing him into producing a second bookable offence.

The reasoning behind Valverde's appointment in the first place was based on glowing references from his peers in the game. Guardiola, Andres Iniesta and Luis Enrique all hold him in high regard, but ultimately the board felt obliged to make a change based on a decline in performances. 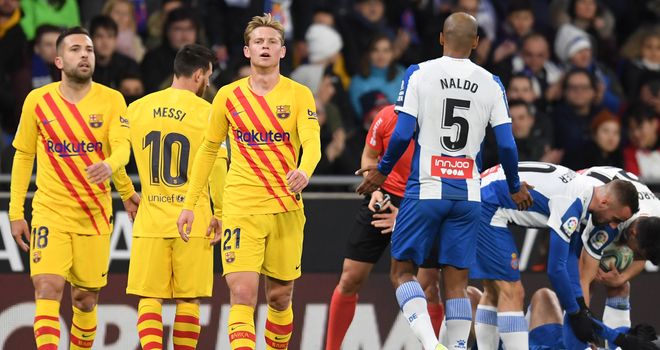 For a club that prides itself on fast-paced, incisive and possession-based football, the pragmatism that set in during Valverde's reign - witnessed during the first goalless draw with Real Madrid in 17 years - eroded confidence.

A midfield of Sergio Busquets, De Jong and Ivan Rakitic should be producing better displays, but they have laboured in games this term, and their failure to control that contest against Espanyol pushed Valverde closer to the exit.

It was the seventh time in 10 away La Liga games this season that Barcelona have failed to keep a clean sheet, with 11 goals conceded in that time, winning on just four occasions.

Losses at Athletic Bilbao, Granada and Levante plus draws at Osasuna, Real Sociedad and Espanyol are unbecoming of a club of Barcelona's stature, irrespective of the ongoing challenges at the Madrid-based rivals. Barcelona are looking to have greater control over non-footballing commitments

Barcelona's motto - "More than a club" - points to the Blaugrana becoming a symbol of Catalan culture and Catalanism.

But the entrepreneurial ventures of Gerard Pique in recent years has reportedly angered club hierarchy to such an extent that clauses are now inserted in contracts that curb non-footballing commitments.

The centre-back has played a significant role in the revamping of the Davis Cup competition in tennis, while he has also purchased a controlling stake in Andorra FC. 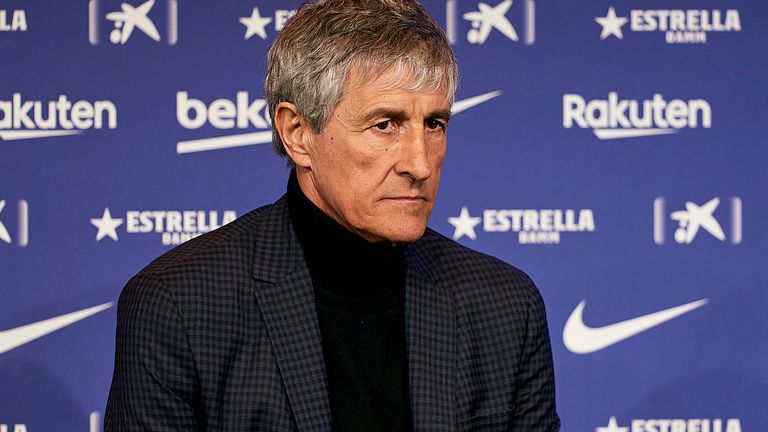 Valverde felt undermined by Pique when the 32-year-old left for Orlando without permission following the Spanish Super Cup in 2019.

The club, in their determination to avoid further high-profile mishaps, have acted the protect its image and to bring the priorities of its players back on the football itself.

Was Suarez injury the final straw? 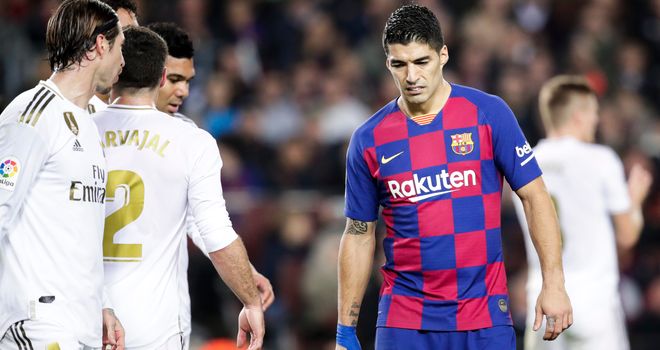 To add salt to the widening wounds, Barcelona confirmed at the weekend that striker Luis Suarez will be out for an estimated four months after he underwent surgery on the meniscus on his right knee.

Valverde has been too reliant on Suarez and Lionel Messi this season with the pair accounting for 24 of their 49 league goals (48 per cent).

The Uruguayan turns 33 this month, meaning steps will be taken to bring forward plans to find his long-awaited successor. Having Valverde still at the helm with the club at a natural crossroads from the point of view of seeking firepower, didn't make sense. 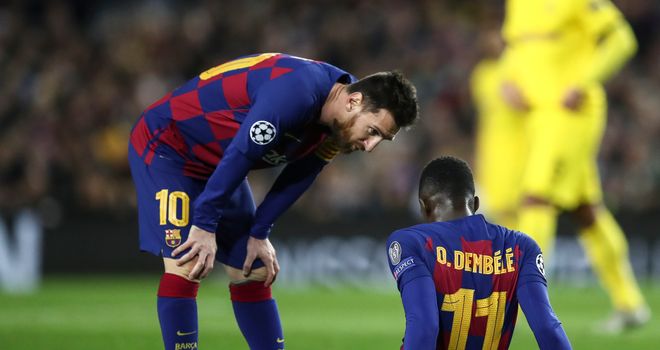 Inter Milan striker Lautaro Martinez has been linked with replacing Suarez, but the Argentine has a £95m (€111m) release clause inserted in his contract.

The £300m spent on Antoine Griezmann, Ousmane Dembele and Philippe Coutinho has not proved good value for money under Valverde, while the club also failed to land Neymar last summer despite their very public overtures for the Paris Saint-Germain forward.

Barcelona might have to sell several players in order to afford another huge outlay, not helped by Chilean midfielder Arturo Vidal still embroiled in a dispute over unpaid bonuses.