Liverpool's record-breaking Premier League campaign has left hopes of a title race in the gutter, but there's a fascinating battle developing in behind as the race for the top four hots up.

Champions League football, of course, is the prize up for grabs. It's a carrot that is becoming increasingly important for clubs in terms of their financial goals and ability to attract the best players from around the world. It's the most lucrative chase in football.

The top two, Liverpool and Manchester City, looked nailed on to finish there, so that leaves seven teams jostling for position in behind with just six points separating Chelsea in fourth and Wolves in ninth.

Leicester City and Chelsea are odds-on to join Liverpool and City, but it's been a season of strange results so there is still big hope for Manchester United, Tottenham, Sheffield United, Wolves and Everton to stage a late-season rally.

Who qualifies for Europe? It's Leicester's to throw away, that's for sure. It's easy to forget that we're dealing with a surprise package here - not many saw this coming.

Brendan Rodgers' team took charge of this race with a sensational mid-season surge of wins that has given them a 10-point cushion between themselves and Sheffield United in fifth place. They also have a game in hand and have already faced Liverpool twice this season. However, is the pressure of expectation affecting the Foxes? Despite their front-foot performance levels still catching the eye, they have lost four of their last nine Premier League games. The goals have dried up for Jamie Vardy, too. The Premier League's top goalscorer with 17 goals hasn't found the net in his last five matches and has only registered four shots on target during that period, which is down on his usual average.

But four points from their last two matches including a 2-2 draw with Chelsea will have given Leicester, who have no European football to distract them in the run-in, belief of seeing the job through. Jorginho celebrates with his Chelsea teammates - can they get over the line?

After looking nailed on at one point for a top-four finish, Chelsea have now opened the door to the chasing pack. Frank Lampard's young side are full of talent but riddled with inconsistency. Since suffering a shock home defeat to West Ham in November, Chelsea have taken just 15 points from a possible 33 and have failed to put back-to-back wins together in that period.

A reliance on striker Tammy Abraham has been a key issue as Chelsea do create plenty of chances but fail to make them count, something Lampard has been tearing his hair out regarding. And a failure to act in the January window hasn't exactly helped the mood at Stamford Bridge.

The next two games for Chelsea, against Manchester United on Monday Night Football and Tottenham, will go a long way to defining their season. 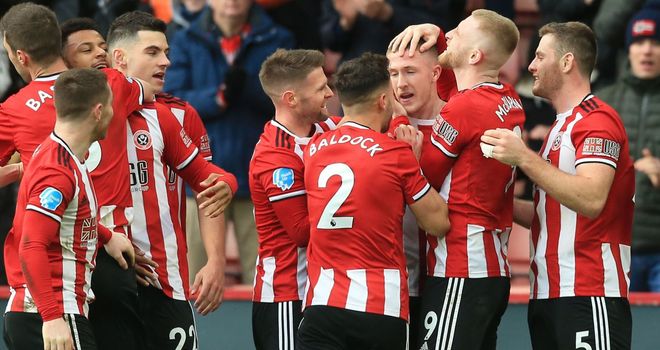 Chris Wilder says he doesn't look at the Premier League table. If you believe that, you'd believe anything.

Survival was the simple pre-season aim for a side that carried little or no Premier League experience and, to many, were unfashionably stocked with players who have risen together from the lower leagues. Yet victory over Bournemouth on Sunday took them to within two points of Chelsea in the Champions League places. Not bad for the team widely tipped to be marooned at the bottom of the table.

As it stands, the ambitious Blades boss, who has been tipped for the Manager of the Year award, won't be publicly declaring the opportunity that is on the horizon but he won't be letting his team drop their levels just because the 40-point mark has all-but been achieved.

How much further can they go? 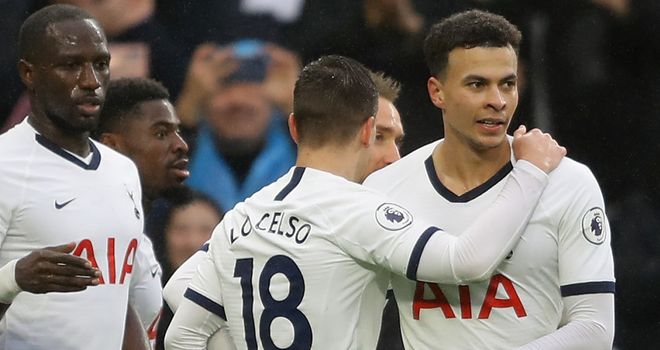 Tottenham were 12 points off Chelsea when Jose Mourinho was appointed in November; the gap is now just four points and according to the bookmakers, Spurs are the most likely side to chase down Leicester or Chelsea. Mourinho was called for so that Spurs could finally be a team that got over the line, and finishing in the top four will no doubt be defined by the new boss as equal to winning a trophy.

It's not been pretty from Mourinho's side at times but he's helped tightened up the defence. Interestingly, Mourinho's side have won possession in the final third of the pitch more than any other side in the Premier League since his arrival in late November, winning more than twice as many balls higher up the pitch compared to Mauricio Pochettino's side - this was on full view during their 2-0 win over Manchester City.

With Chelsea meeting Manchester United on Monday Night Football, Spurs could be in a position to move above the west Londoners when the pair meet next Saturday.

With top scorer Harry Kane still to come back into the side when fit, there could still be more to come from Mourinho's Spurs. Yes, Everton really are seventh. It just shows you what a few wins can do for you in the Premier League this season. The Toffees are right in the hunt.

In December, the Merseysiders, despite having a talented squad, found themselves at the wrong end of the table following a series of bad results. However, since Carlo Ancelotti replaced Marco Silva only Liverpool (24) have won more league points than Everton (17) since his first game in charge in December, although their last five games were against teams in the bottom half of the table.

Fixtures are set to get trickier with six of their next eight opponents coming against teams in the top half of the Premier League. Marcus Rashford is out injured for Manchester United

United remain frustratingly inconsistent - something that hasn't surprised Ole Gunnar Solskjaer this season in his bid to bring the good times back to Old Trafford.

This is a team that have beaten Tottenham, Leicester and Manchester City this season but dropped points against West Ham and Bournemouth, as well slumping to a 2-0 defeat to Burnley at Old Trafford.

United have won just three games away from home this season and their fixture list doesn't give you much hope in terms of their top-four credentials. Trips to Chelsea, Tottenham and Leicester are still on the agenda.

A top-six finish appears more realistic than a top-four finish at the time of writing. Of course, that can all change with a win at Stamford Bridge on Monday Night Football. 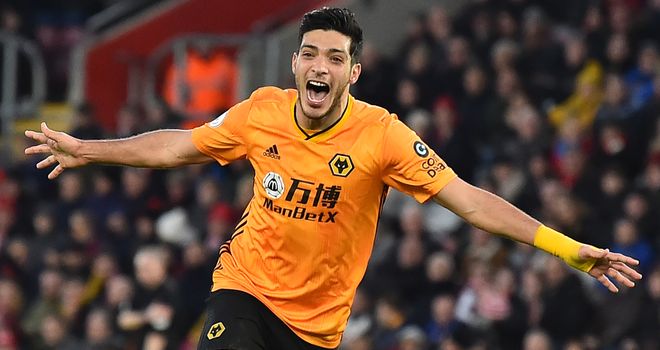 Nuno Espírito Santo's team are hard to dislike and they currently sit level on points with Manchester United in eighth place. However, they've been at it since July due to their Europa League qualifying campaign meaning they've already played 40 games across all competitions this season.

A gruelling schedule could yet take its toll but Nuno's side look dangerous challengers again, with Adama Traore starring and Joao Moutinho effortlessly bossing midfield.