Sean Dyche exclusive: Inside life in the transfer market at Burnley Sean Dyche isn't shy in describing the difficulties he faces at Burnley. Quite publicly he insists their status in the Premier League is under threat if they don't stretch their budget, a budget Dyche himself has traversed expertly over nearly eight years at Turf Moor.

How chairman Mike Garlick reacts remains to be seen, and Dyche's future is similarly uncertain, but the Burnley boss has been crystal clear over recent weeks: the transfer market has changed, and the club need to catch up.

Looking at their performances on the pitch, you wouldn't think there was a need for concern. Dyche has Burnley in the top half, against all odds, having won six and drawn three of their last 10. With a net spend of just under £9m per season, it's an incredible feat. Just like his English colleague Chris Wilder at Sheffield United, who they face on Super Sunday, Dyche is overachieving. But how long can it go on for?

"If you want to really, really jump, you've got to be looking at the £25m mark," Dyche tells Sky Sports. "I don't think this club will do that. So, therefore, we are always in this lower bracket anyway."

According to Transfermarkt, Burnley have made six signings over £10m; of current Premier League clubs, only Sheffield United and Norwich have made fewer. Newcastle (24), Southampton (23), West Ham (19), Bournemouth (13), Brighton (9) and Palace (7) have all made more.

"As a club that doesn't want to put money out there and hope, we have to try and make the signings that are edging towards 'these are going to work,' rather than a 'right let's just wait and see if he works, we'll just take them anyway,' which some clubs do. 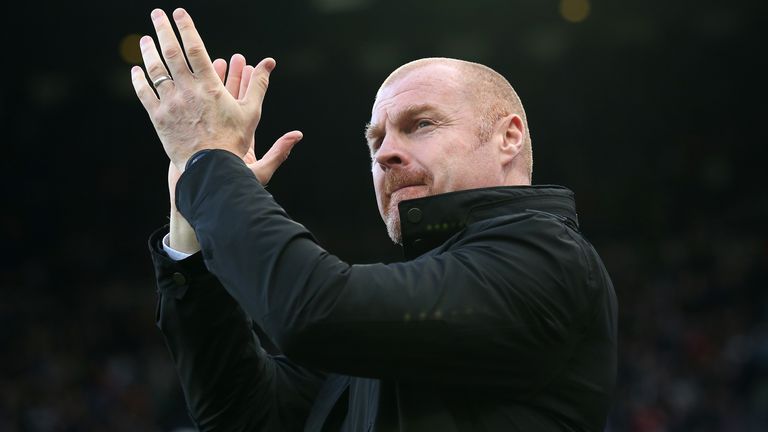 Dyche's recruitment has been superb. Phil Bardsley cost £750k. Charlie Taylor was a free transfer. Johan Gudmundsson cost £2.2m. Nick Pope was just over £1m, as was Ashley Barnes and Matt Lowton. James Tarkowski around £4m. Ashley Westwood was £3.5m. The list is long and impressive.

These are Dyche's trophies. It's clear he is proud, and enjoys coaching prospect signings into Premier League regulars. With such a low budget, his coaching ability is tested more than the majority of Premier League managers.

"I think it's an enjoyable challenge because it's something I believe in, and always have done. When I first went into coaching with the Watford Under-18s, my main aim was to give them more than I had received in my career. I thought if I could give them more, and they develop, that is the key. And I strongly believe that as a manager now.

"Of course you've got to get results, but if you can do that in a way that the players are benefiting, growing, maturing, you're raising your chances of winning again anyway.

"If you want to really, really jump, you've got to be looking at the £25m mark. I don't think this club will do that. So therefore, we are always in this lower bracket anyway."

"It's good that I believe in it because we've had to do it! It's rare that we go out and spend big money, so it has become part of what we do. But it does become more difficult, because you can't get these players.

"Even the ones we have developed, how quickly can you get them to be effective? Because a lot of them actually haven't played Premier League football."

Dyche's public frustration is increasing, and the tension is clear. He's recently said how Burnley cannot work on a net spend of £9m forever, how the contract situation - which saw four players depart on June 30 - was "strange", and how some decisions have been made too late.

His main concern seems to surround forward planning. A new season will be just around the corner, and Dyche will be fighting to overachieve again, so what are the blueprints for next term and beyond?

"That's with the chairman at the moment. I've offered what we think is appropriate, and so has Mike Rigg and the powers that be in the club, and eventually it does come down to the chairman at some point, because he has to give it the sign-off for getting it done. There are situations, but we'll wait and see. "I think the early signs of this lockdown are that the big superpowers are still going to be spending a lot of money. It suggests there's money out there to be spent. Whether or not is softens slightly, we'll see.

"In our world, our markets are not the main market. We don't always sign other Premier League players, or big players from Europe, with financial reasons being the first one.

"There may possibly be a softening in the Championship and below. We're going to have to wait and see, but we often have to wait and see anyway! It's very rare that we say: 'Here's a big fat cheque, we want your player!' so it's often the waiting game."

Given the current situation, a top-eight finish would arguably be Dyche's best achievement in management. In 2017/18, Burnley finished seventh and qualified for the Europa League with 54 points, but as Dyche rightly points out, times are even harder now. "It will certainly be up there as an achievement, because the last time we finished seventh we didn't have all of these challenges. We had a fully fit squad, and we were going well.

"The daily issue is getting players fit, and the weekly one is the same! Getting players fit and out there. I wait for the physio to come in, with that look, and you give him that look back, almost like a horror film where you have your head behind the cushion, and you think: 'I hope he's going to give me good news!'"

The Burnley board may be doing the same if Dyche's frustrations continue and that stretching of the finances turns into a snap. Sacking season is almost upon us, and there are few pound-for-pound better managers out there.